The shape of things to come
The right time for a debate on a new National structure?

Does the current enforced break from contesting give banding in the UK the chance to look at the shape required for a healthy national banding structure... 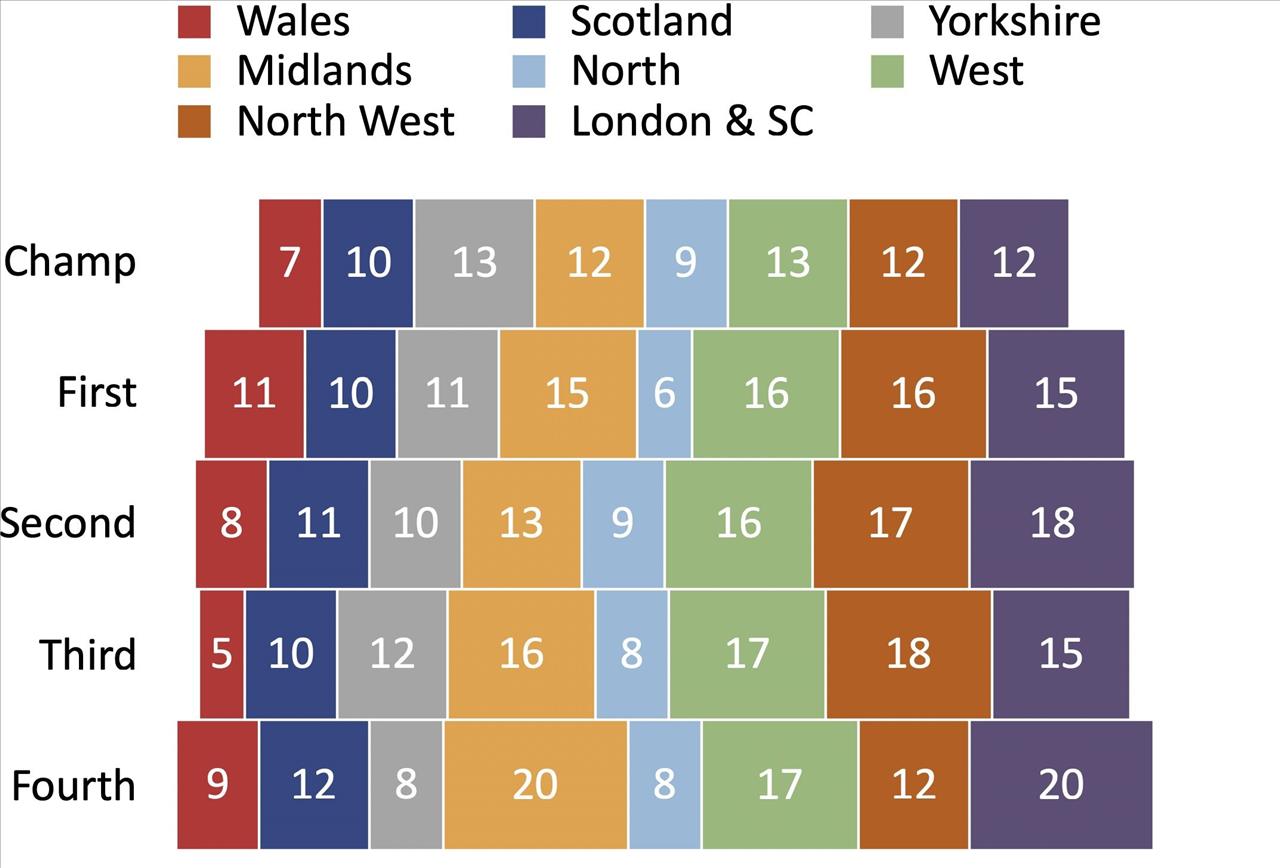 Structure and number of bands competing at the 2019 Regional Championships 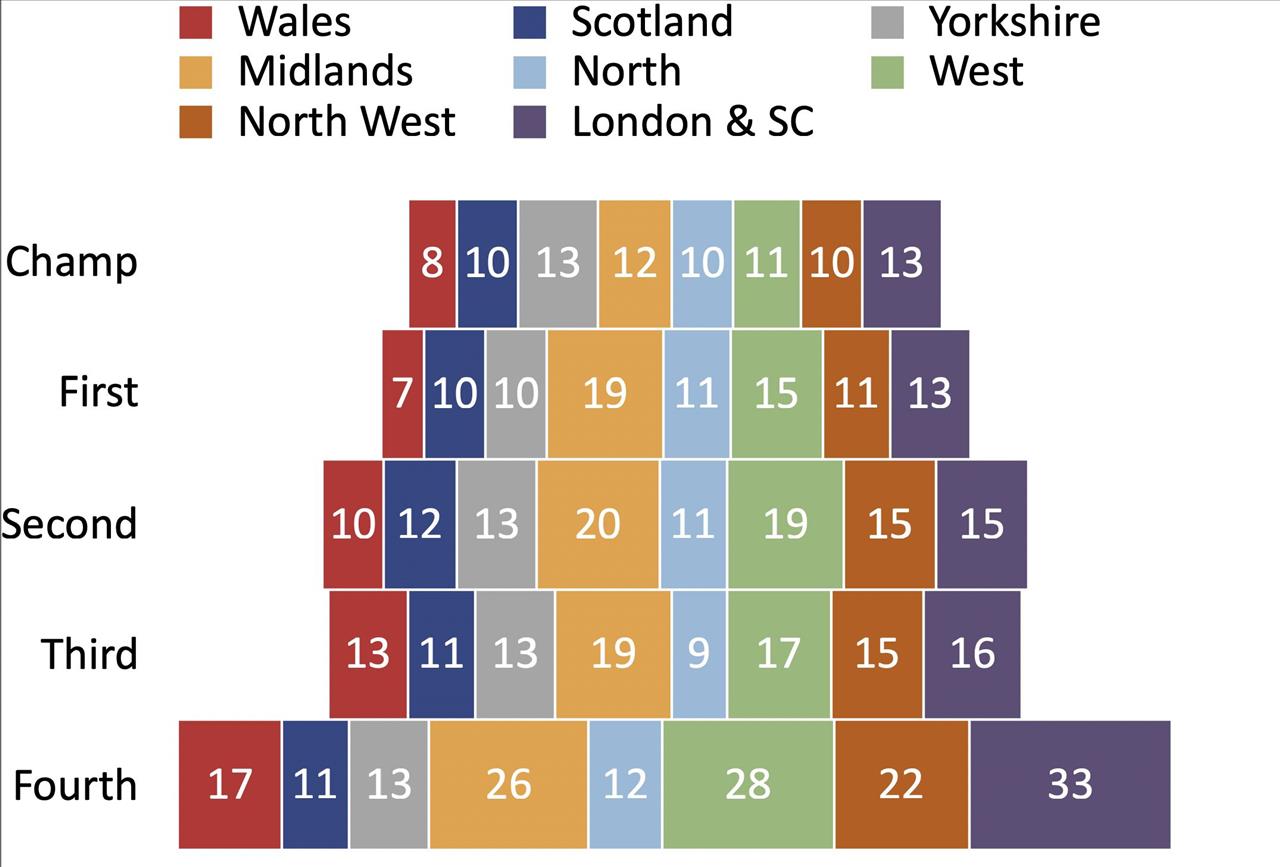 Structure and number of bands competing at the 1999 Regional Championships

In 2008 4BR published an article on the health of the banding nation by looking at the number of bands that competed at the eight regional championship events (including the Scottish Championship) during the past 25 years.

Understandably it was a story of decline – one that started just after the end of the 1984 Miners’ Strike and continued (with the occasional blip of rejuvenation) through the new Millennium and beyond - a jagged graph line of peaks and troughs falling inexorably downwards – from a high of just under 600 in 1988 to just over 500, two decades later.

Another decade has since passed – one that has mirrored what has gone on before; a slow decline to the figure of 497 that took part in the 2019 Area contests (the last full series of events).

And whilst there is an obvious debate to be had in looking at the underlying social and economic reasons that have contributed to this, there is little doubt that there is also one to be had about UK banding’s actual ‘National’ competitive structures themselves.

The last major regional re-organisation occurred in 1985 (although there were subsequent tweaks in 1991 and 1994), whilst 2022 marks the 30th anniversary of the creation of the First Section.

And whilst there is an obvious debate to be had in looking at the underlying social and economic reasons that have contributed to this, there is little doubt that there is also one to be had about UK banding’s actual ‘National’ competitive structures themselves.

There is an argument that both issues need to be addressed once more.

The geographic one is perhaps less urgent - some tinkering with the rules could be implemented to allow postcode ‘border’ bands to be allowed to compete at the Area contest that is closest to their home.

The more pressing though is surely the need to look at initiating an overhaul of the actual competitive sections themselves.

It’s useful then to remind ourselves why there was a re-organisation of the traditional four section structure that had served banding since 1945, and why it was felt that it no longer served its purpose.

It’s also important to note though that when it did occur in 1992, it didn’t follow any particularly fevered debate to its rights or wrongs.

It’s useful then to remind ourselves why there was a re-organisation of the traditional four section structure that had served banding since 1945, and why it was felt that it no longer served its purpose. 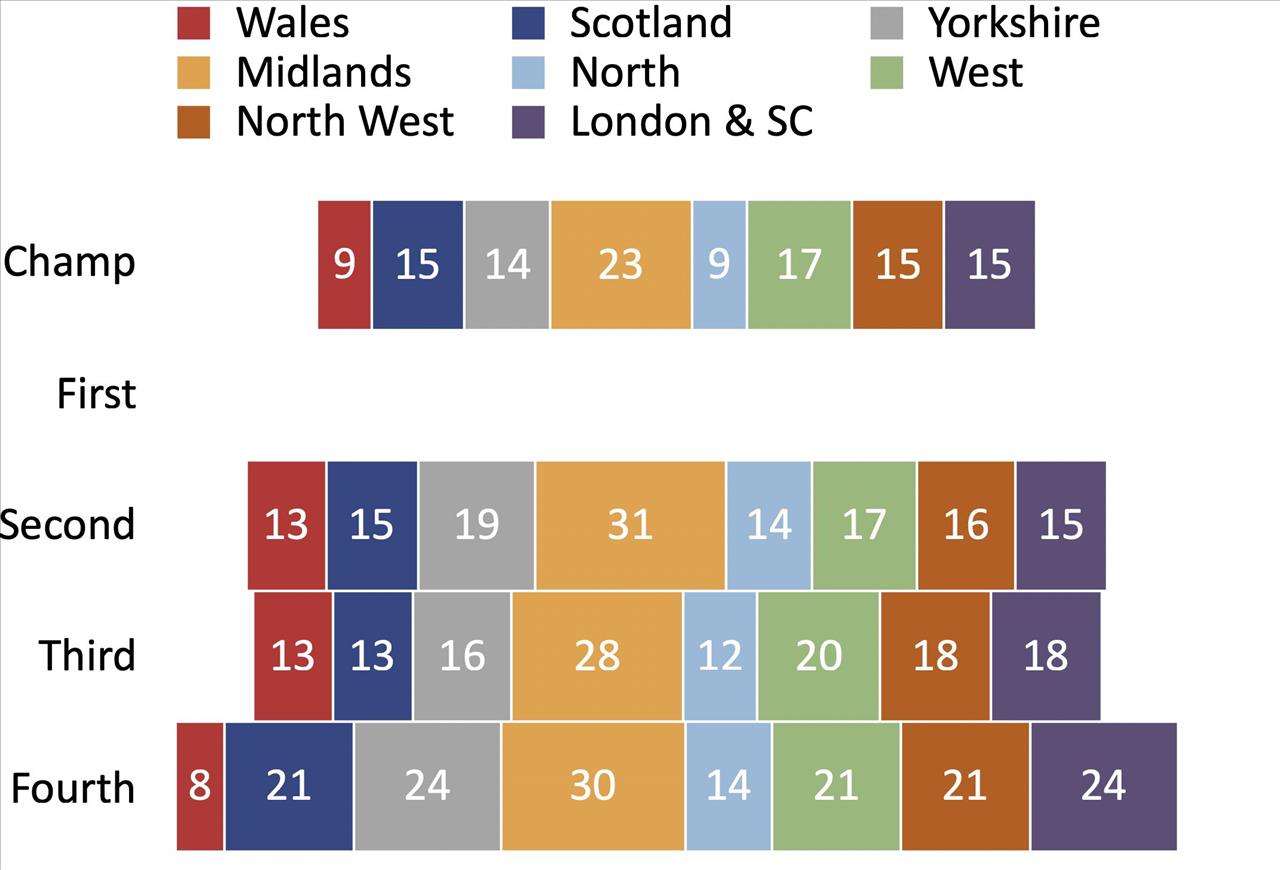 Structure and number of bands competing at the 1989 Regional Championships

The pages of the British Bandsman (Brass Band World appeared in late 1991) were not full of irate correspondents – in fact people were much more concerned about open adjudication, allowing professional players to play in contests, the proposed move of the Brass Band Registry and even the setting up of a tenth Regional Championship Area in North Wales.

The general consensus was that the ‘gap’ between the Championship Section and the Second Section had become too wide and that a ‘buffer’ was required so that bands would not be faced with an insurmountable step in quality to be able to compete successfully at the top level.

After the decision was made, the various Regional Committees re-graded their bands (undertaken with understanding and cooperation) and the new set-up was put in place in time for the first Regional contests of 1992.

Looking back on it now, it was all done with little vocal opposition, although some voices aired the ultimately prophetic opinion that all that was actually happening was a cosmetic shift of appearance, rather than a constructive shift in emphasis, unless a strict, clearly defined and implemented system of promotion and relegation was adhered to.

This was certainly essential if a Championship Section in each Area of up to maximum of 10 bands (in the larger Areas) was to be maintained, enabling the pyramid structure (although more a stepped ziggurat) to be developed over time with a broad foundation stone of Fourth Section bands at its base.

Each Area would be a reflection of this – the fewest bands at Championship level, the most in the Fourth Section.

In 1992 the brave new world started with a structure that looked like this...

Each Area would be a reflection of this – the fewest bands at Championship level, the most at Fourth Section level. 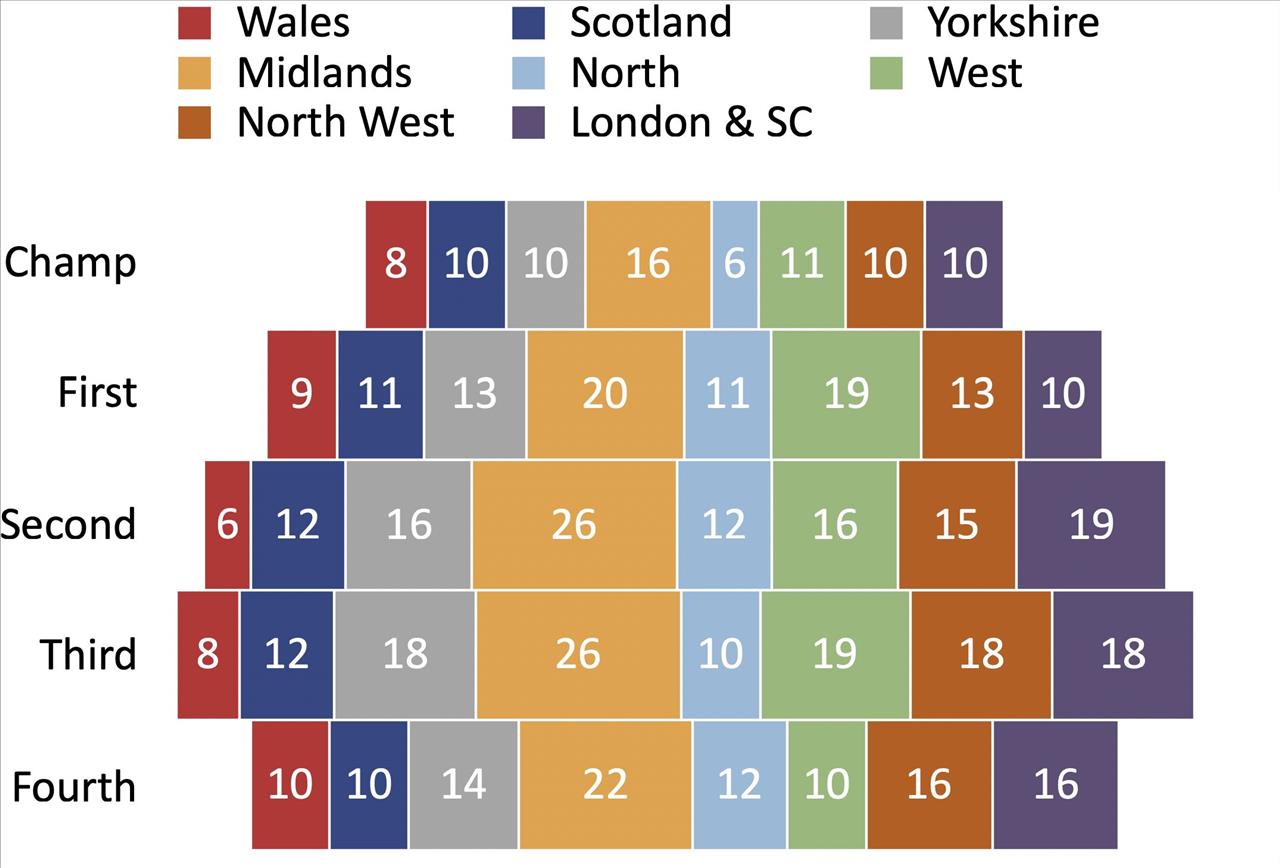 Structure and number of bands competing at the 1992 Regional Championships

Although the Fourth Section had fewer bands than the Third to start it had a coherent, understandable shape – one that reflected the competitive standards of banding of the time. 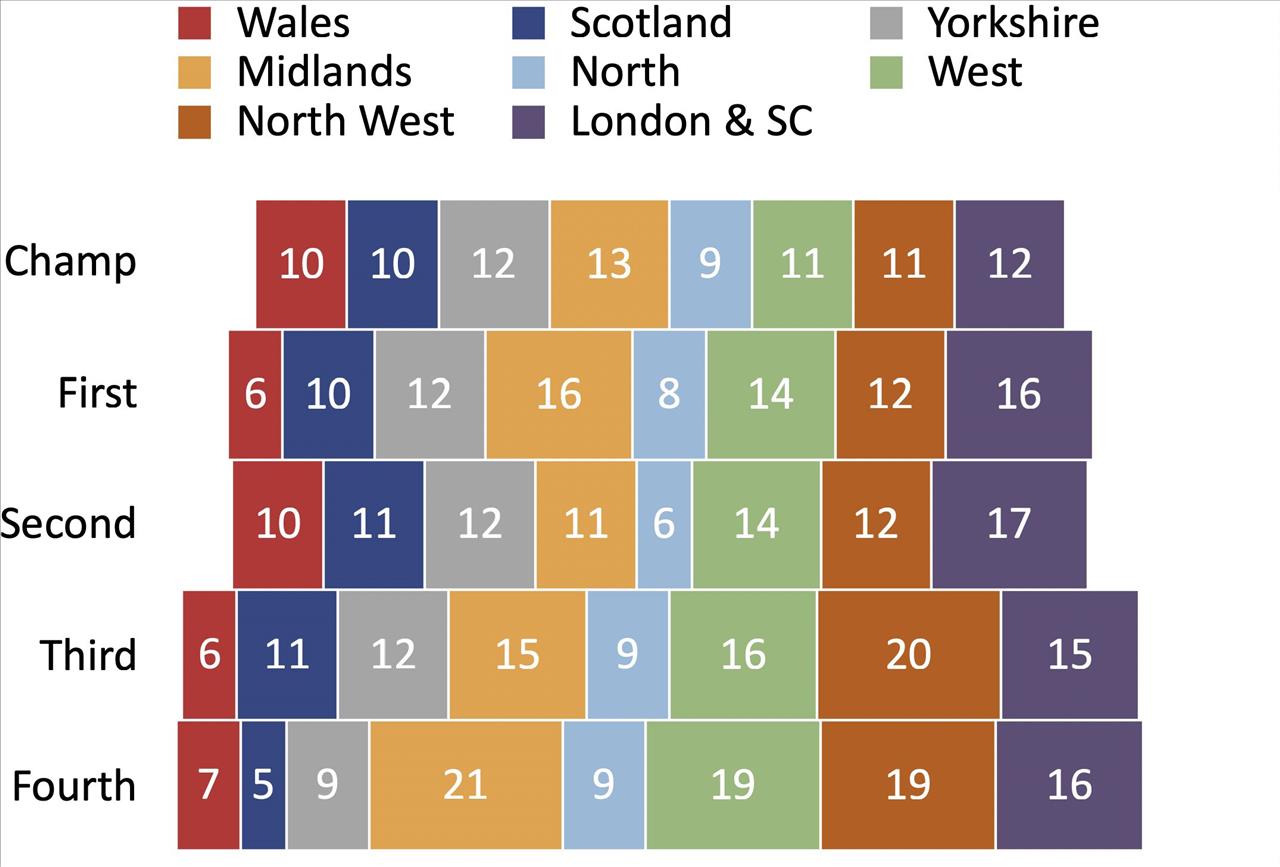 Structure and number of bands competing at the 2009 Regional Championships

However, over the next two decade the structure lost its shape – becoming a constipated blockade.  The Championship Section remained static – 87 bands in 1999 to 88 in 2019. The First Section increased from 96 to 100.

The whole structure has almost become square shaped - and arguably one that bears very little relationship to the true standard of competitiveness in the UK – especially at the top end of things.

Like exam grade inflation in education, we have all been complicit in kidding ourselves that standards have been forever improving – that in the years to come we will all be Championship Section contenders.

Arguments will rage to why this structure has been allowed to develop – from antiquated rules regarding promotion and relegation that have long been unfit for purpose, to the vanity of bands that regard themselves as ‘top section’ ensembles when they are anything but.

Then there is the actual desire of those with the ability to initiate change to actually do so – be it the bands, the various regional committees or Kapitol Promotions.

Like exam grade inflation in education, we have all been complicit in kidding ourselves that standards have been forever improving – that in the years to come we will all be Championship Section contenders.

There could become a time when the ziggurat pyramid does in fact return – but at this rate it could be one that is upside down.

So has the time finally come to start a meaningful discussion about the shape of things to come, and to be realistic about what the outcome should mean for bands when it’s done?

This enforced contesting break may just give us all the opportunity to do just that.

August 12 • Newbridge celynen brass band 4th sectiob are recruiting *Cornets * Flugel Horn *Horns * Baritone and Bb and Eb Bass . . We are planning to rebuild over the next 12 months with Concerts and 3 contests