4BR Spotlight interview
5 minutes or so with Rex Richardson 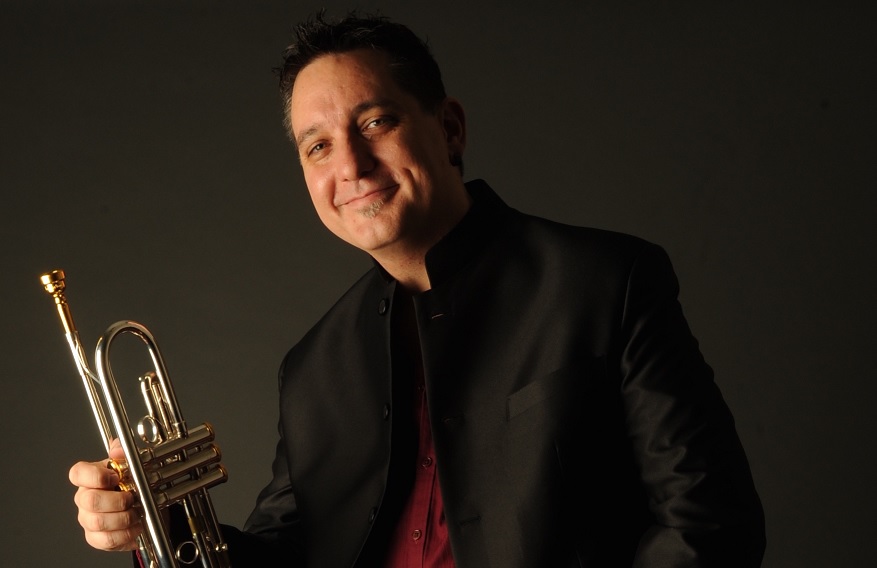 The title of your recent CD release ‘Freedom of Movement’ seems rather apt in these times of perceived insularity and exclusion on both sides of the Atlantic Ocean.

Has an appreciation of ‘freedom’ in its many guises been a key element in you exploring challenging new horizons?

I do hold dear the ideal of ‘freedom’ in virtually every context, for individuals, groups and artists in their attitudes and explorations, both cultural and aesthetic.

I’ve been very fortunate to perform and teach on six continents, and I know that as an American I’m privileged to have such access.

The travels have influenced my ideas about people and society as well as about music; every exposure to a different place and a different way of making music has been a unique learning opportunity for me.

I suppose it’s apt, and as it’s also the title of Andy Scott’s concerto and due to the eclectic nature of the featured works, I thought it appropriate for the album. 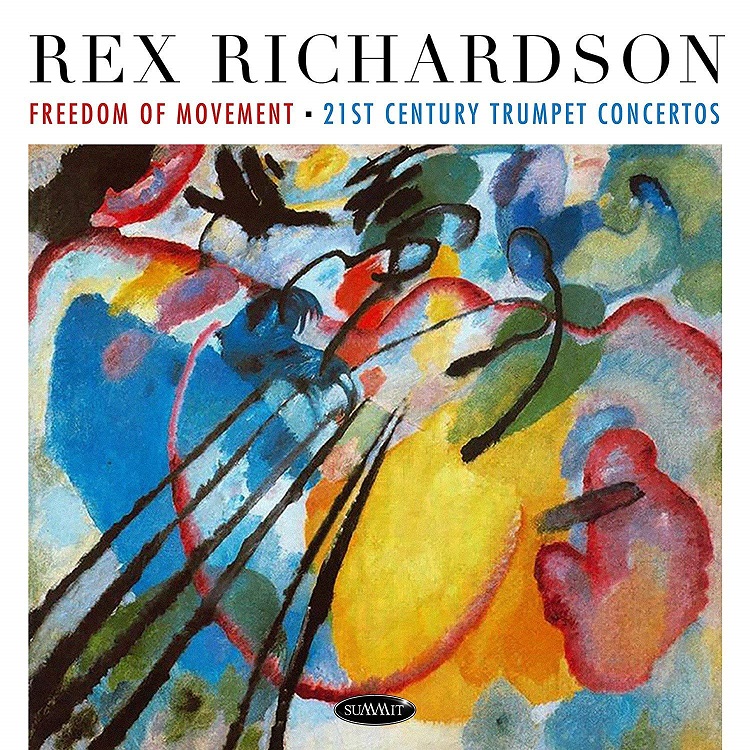 Is this release then something of a musical statement - of what can be achieved and what may be lost if musicians are restricted in their outlook and their ability to explore?

I don’t know that I was conscious of ‘what may be lost’ nor ‘what can be achieved’ in that respect.

Rather, my intentions were far simpler: I just like to play music, as naive as that sounds!

I love all four of these composers as friends as well as artists, and wanted to commission works by them that I could perform.

I’ll leave it to others to judge whether the recording is ‘important’ or not. I really just hope it’s enjoyable!

However, I do feel that the compositions are significant as high-quality, genre-challenging additions to the repertoire, and so I’m grateful to have had the opportunity to help bring them into being! 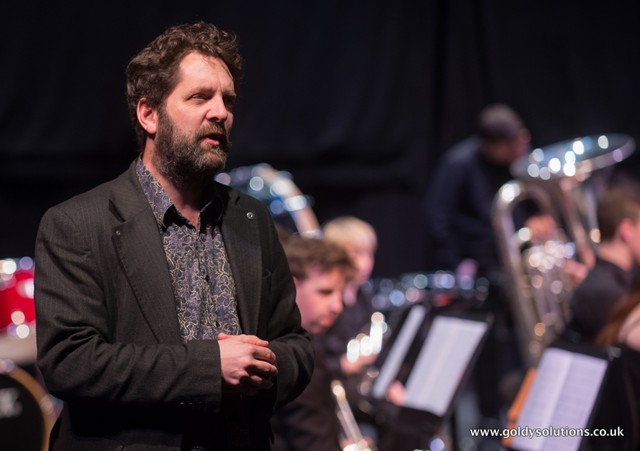 Has that always been part of your musical DNA then?

I supposed that it’s been an evolution as well.

I think Andy (above) and I share a tendency to embrace the broadest sweep of musical idioms, which to me is reflected in his beautiful concerto. I hear post-bop, hip-hop, traditional brass band, contemporary big band jazz, and even heavy metal in it.

It’s all great music, and all of it contains valuable lessons for me as a trumpeter, improviser and composer.

As a kid I was steeped in classical music and loved jazz.

Then, as I grew up musically, especially during my time with Rhythm & Brass, I plunged into all the music I could - from Tuvan throat singing to Beck and Björk, late-20th century orchestral to traditional songs from Ghana and classic rock and from soprano Dawn Upshaw to Radiohead.

It’s all great music, and all of it contains valuable lessons for me as a trumpeter, improviser and composer.

So does that also reflect the choice of the four featured works on the release?

In a certain sense.

All the works are very different; but they all seem to have been a ‘stretch’ in certain ways for the composer and certainly for me as a performer.

If you don’t feel comfortable dealing with different idioms, which means being open minded enough to respect each one, and don’t feel motivated to challenge the conventionally-understood limitations of the trumpet, both expressively and technically, then you might not embrace these works. 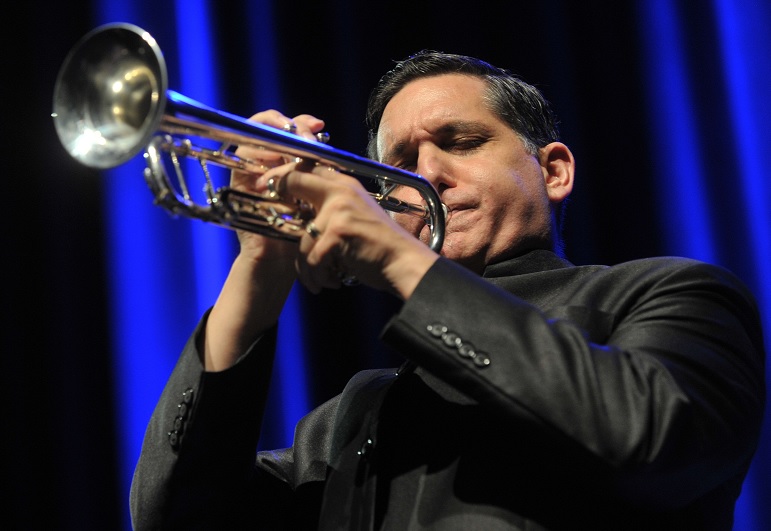 Tell us a little about each one – and why they are important to you?

Allen Vizzutti’s ‘Three World Winds’ was originally written for wind ensemble; the version heard on the CD is for brass band and was orchestrated by tuba virtuoso and conductor Pat Sheridan.

The movements, ‘Scirocco’, ‘Chinook’ and ‘Cyclone’ follow the traditional fast-slow-fast format and call for the soloist to play piccolo trumpet, flugel and B-flat trumpet respectively.

In many respects it’s vintage Vizzutti; gorgeous, sweeping melodies and virtuoso passages spanning the full range of each instrument.

In many respects it’s vintage Vizzutti; gorgeous, sweeping melodies and virtuoso passages spanning the full range of each instrument.

In other ways I believe it’s entirely new among his works for solo trumpet, with a grander scope and richer harmonic writing.

It’s a true joy to play and audiences love it.

Andy Scott’s ‘Freedom of Movement’ is a concerto with contrasting sections played in one continuous movement.

I stay on B-flat trumpet throughout and it features some great muted intersections.

It’s a wonderful amalgam of different musical worlds and Andy was the perfect guy to write it.

In addition to his tremendous gifts as a composer, his background as a saxophonist and someone steeped in the world of brass bands gives him a unique set of tools to work with.

So, there is straight up post-bop/cool jazz language with improvisation balanced by a lovely ballad section that yearns of the traditional brass band.

In addition to his tremendous gifts as a composer, his background as a saxophonist and someone steeped in the world of brass bands gives him a unique set of tools to work with.

Then there is a crazy, virtuosic middle section for soloist and percussion evoking mid-20th century classical music and calling for multi-phonics by the soloist, before a finale that combines a contemporary big band aesthetic (think Maria Schneider) and culminates in a glorious ‘brass bandish’ climax.

It’s a remarkable piece and extremely difficult to play: But I absolutely love it. 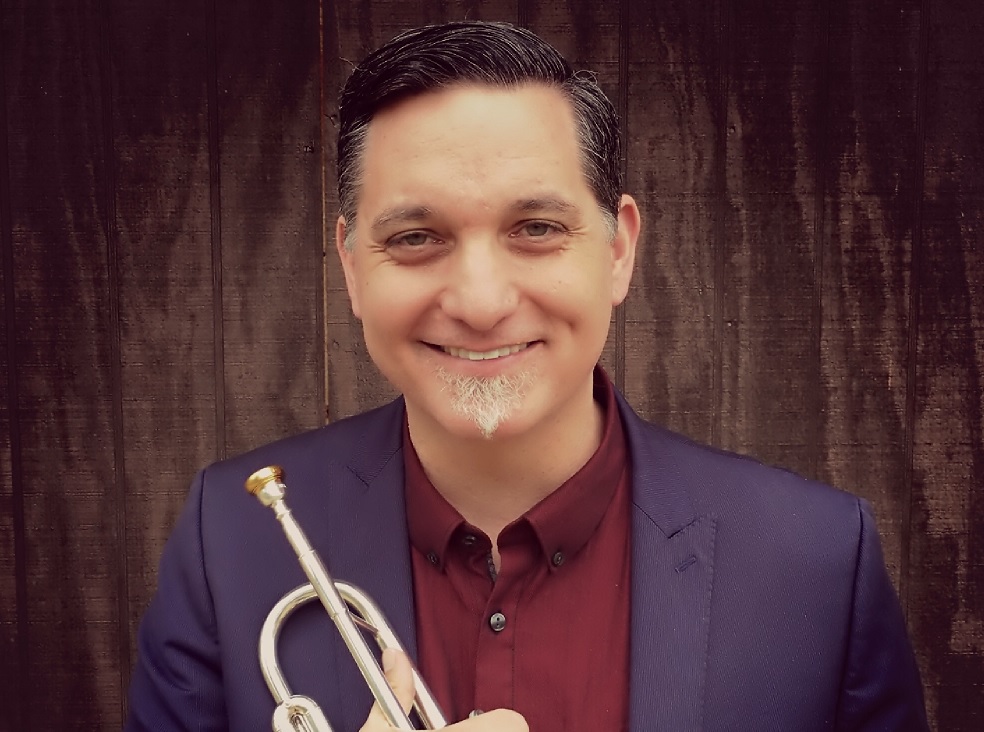 Concerto No.3 for Trumpet and Brass Band

Anthony Plog’s ‘Concerto No. 3 for Trumpet and Brass Band’ is the most succinct work on the album; comprising five short movements inspired by different paintings in Wassily Kandinsky’s Improvisations series.

Part of the commission fee was funded by a consortium of soloists and brass bands, so it’s probably received more performances already than all of the other concertos combined.

Finally, there is Jim Stephenson’s ‘Concerto no. 2 for Trumpet and Wind Ensemble – Rextreme’.

This is the earliest of the works, having been composed for full symphony orchestra in 2010. Since the premiere in Sydney I think I’ve performed it over 40 times in various formats (brass band, wind band, piano reduction) in over 25 countries.

I think Jim is a true genius-level composer - although he would laugh to hear me say that!

Yet, to say it is “worth it” is a grand understatement: It’s a transcendent experience to share this piece with ensembles and audiences alike.

The work is extraordinarily complex and clever. It’s still the most technically challenging thing I’ve ever put on stage, calling for three different horns, circular breathing, multi-phonics, improvisation and extremes of range and agility.

Yet, to say it is “worth it” is a grand understatement: It’s a transcendent experience to share this piece with ensembles and audiences alike.

All of the works are “customized” for me to varying degrees.

Tony kept my background in mind, but more so than the others, was trying to write a work that would be accessible to a wide range of trumpeters rather than focusing especially on my approach to the instrument.

Allen knows my playing very well; as such, he knows that I aspire to approach the instrument very much in the same way he does.

‘Three World Winds’ is in a way written more for himself, with the confidence that I would (eventually!) learn how to play a piece that’s probably fairly easy for him!

Andy and Jim wrote truly personalized works; both spent time with me in person and with my recordings attempting to absorb elements of my facility, used of extended techniques, sound, phrasing and indeed my own compositions, before starting to write.