Foden's cornet player Adrian Beresford signed up for the #SwabforSykes campaign in March 2017 — resulting in an incredible personal experience that has seen him potentially save the life of a woman across the Atlantic Ocean... 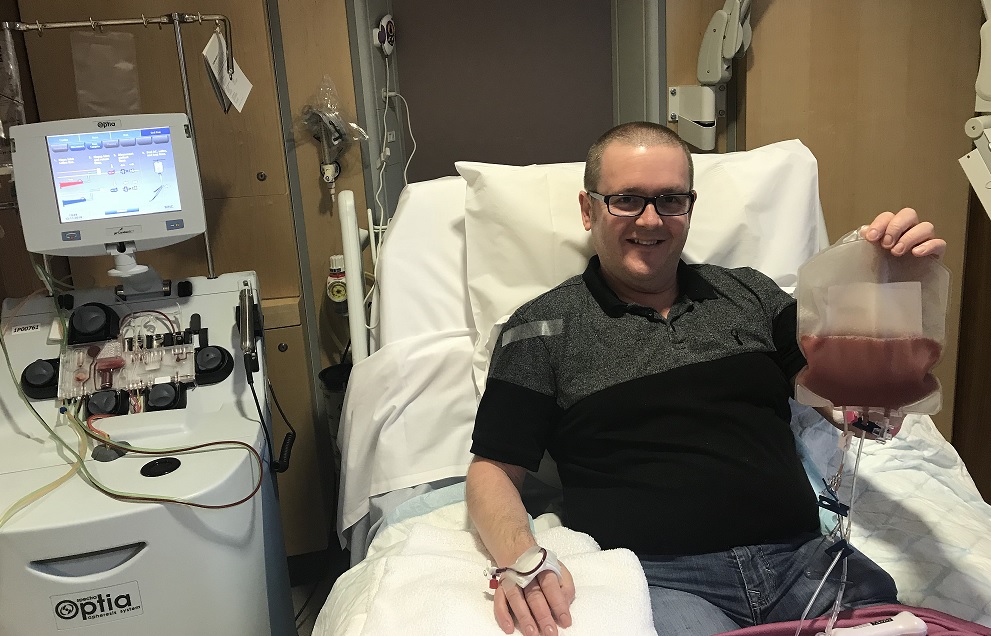 Bag for Life - Adrian Beresford with his life saving blood

Foden’s cornet player Adrian Beresford was one of countless brass band players and supporters who signed up for the #swabforsykes campaign.

In 2016, trombonist Stephen Sykes was diagnosed with Hodgkin Lymphoma.

Having undertaken extensive treatment, including seven rounds of chemotherapy, he was eventually told that a blood stem cell donation from a matching donor was his best chance of survival.

His situation was very serious, but soon friends started a campaign launched in conjunction with DKMS, a global organisation dedicated to the fight against blood cancer, to try and find a stem cell donor by signing up as many people as possible to the British Bone Marrow Registry under the banner name, #SwabforSykes

It was a resounding success - especially after dedicated volunteers started attending brass band events and contests to sign people up.

The response was nothing short of incredible. 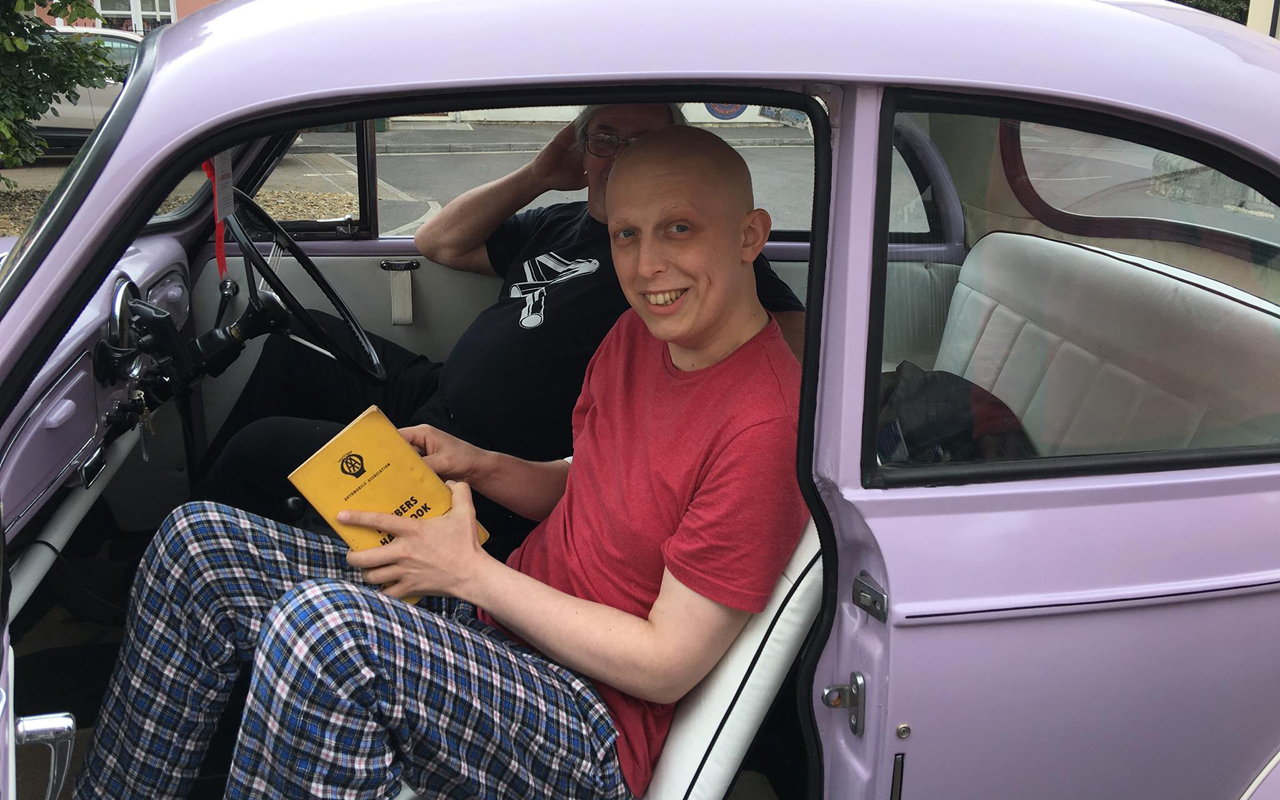 The inspiration: Stephen Sykes went through seven courses of chemotherapy

One person who signed was cornet player Adrian Beresford, who at the time was playing for Derwent Brass at the Midlands Regional Championships.

“I was waiting around in Bedworth and decided to join,” he told 4BR when looking back on what turned out to be the start of an incredible experience.

“I spent about a minute rolling two swabs on a stick around the inside of my cheeks: All very simple. That was that I thought.”

“I spent about a minute rolling two swabs on a stick around the inside of my cheeks: All very simple. That was that I thought.”

As was explained to Adrian, his details were then sent off to be stored on the Bone Marrow Registry.

Like 95% of people who sign up, he heard nothing (the details are stored for 10 years) - until June 2018, when he was contacted by DKMS to say that several of his tissue characteristics matched those of a patient in need of a stem cell transplant.

“It was a bit of shock to be told I was included on the short list of potential stem cell donors.  However, it was also exciting as I felt that something really positive was happening.” 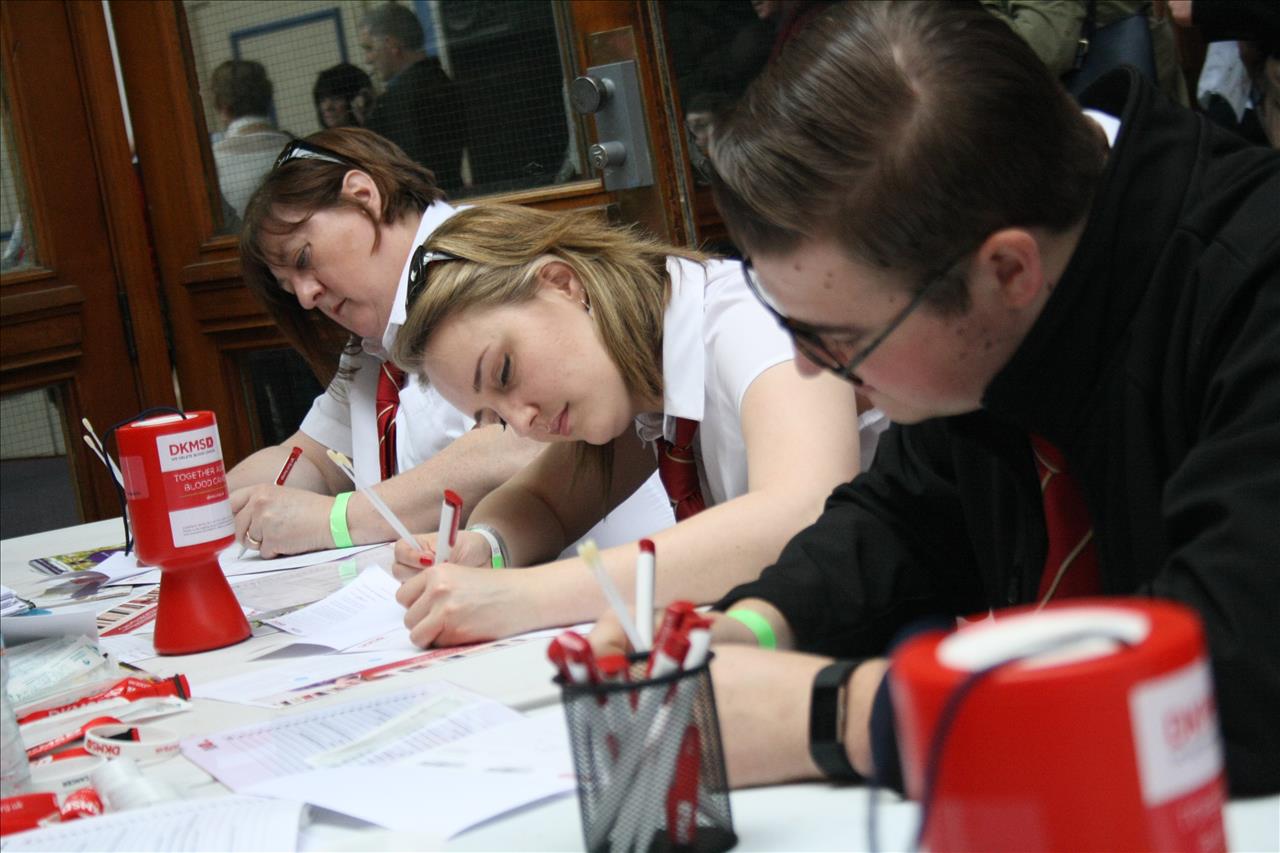 He recalls what happened next. “An appointment was made at my local hospital to take blood samples which were sent to DKMS so that tests could be carried out to see if I was a suitable donor.

In September I received news that the patient’s medical team would like to progress with the transplant using my stem cells and that I would be contacted within the next month to arrange further tests.”

These were carried out in October at the private London Clinic hospital in London; including more blood tests, a chest x-ray and an ECG test in addition to a meeting with a doctor to discuss the process.

In a strange quirk of fate, Adrian works for a large Healthcare company which has the contract with DKMS to supply the medication and nurses to carry out the injections.

Adrian continued: “A few days later, I received confirmation that the results were all good, and a date was set for the donation.

To stimulate the production of stem cells I received injections of G-CSF (granulocyte-colony stimulating factor) on the four days prior to donation. This is a naturally occurring growth hormone that stimulates the production of the cells in the blood.”

In a strange quirk of fate, Adrian works for a large Healthcare company which has the contract with DKMS to supply the medication and nurses to carry out the injections.

“Talk about first-hand experience of my company’s work,” he said. “The first two injections were done at work, and for the second batch over the weekend the nurse came to my home.

They did make me ache a little and was similar to having a bad cold, but the symptoms soon passed.” 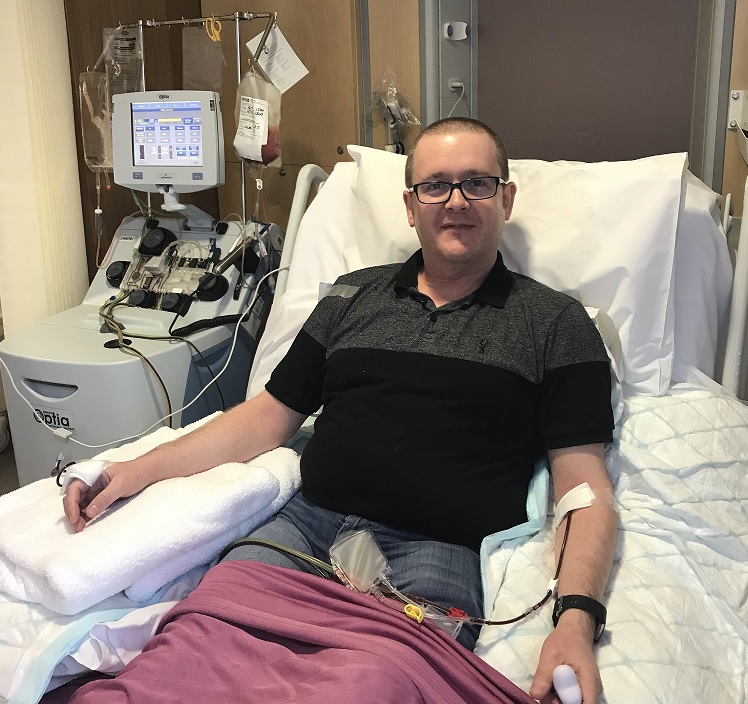 Lie back and think of all the good things...

The actual harvesting donation took place back at the London Clinic.

“I was put up in a nice hotel the night before to ensure I was able to get to the clinic first thing the morning,” he recalls.

“The collection method saw blood was taken from my left arm, run through a machine which separated out the stem cells, and then returned to my body through my right hand.”

The only small concern Adrian had was that his right hand wouldn’t be out of action for long, as he had to keep in practice with Foden’s for their Brass in Concert appearance.

The only small concern Adrian had was that his right hand wouldn’t be out of action for long, as he had to keep in practice with Foden’s for their Brass in Concert appearance.

“The nurse was reassuring and humoured me - although I think she wondered what the fuss was about with me and my cornet playing!

After that it was pain free - although at one point my lips felt a bit tingly as if I had just been in a two hour rehearsal.

This was a sign that I needed a calcium boost due to the anti-coagulant that is used. That wonderful nurse sorted me out again and that was it. Other than that, and the noise the machine made at times, it was easy to forget I was hooked up to the machine.”

Adrian revealed that the process lasted for four hours. And although he had to keep his arm still, he was still able to use his phone and I-pad tablet as well as enjoy a nice meal – one handed!

“After the treatment, the nurse was pleased with the amount of stem cells collected, although I was told I could give some more if required to meet the needs of the patient I was helping.

That was no problem, and after the stem cells had been analysed in the hospital laboratory I received a phone call to confirm that they were happy with my day’s work and I wouldn’t need to return.”

“I felt back to normal within the next couple of days,”

And that was that when it came to potentially saving a life.

“I felt back to normal within the next couple of days,” Adrian said looking back on his experience. 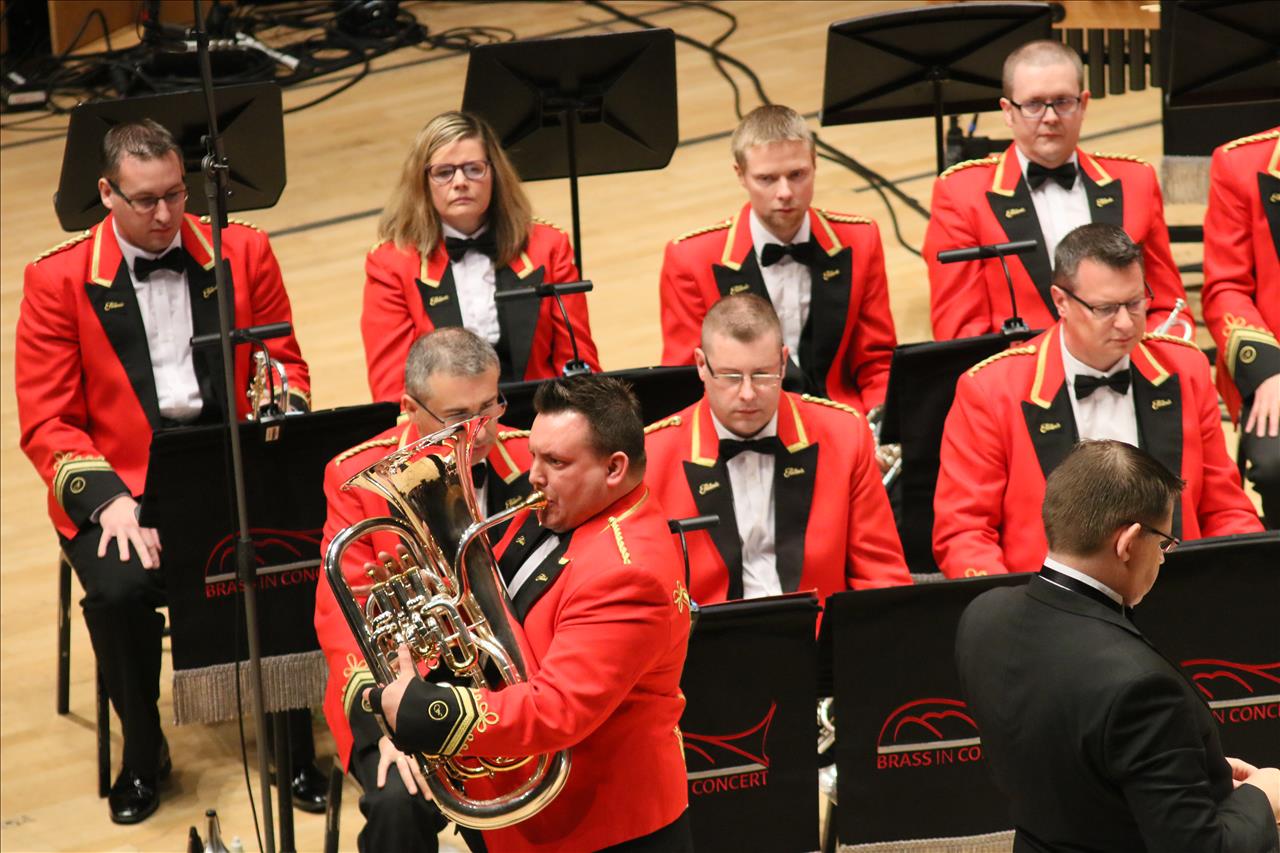 Back in the ranks at Brass in Concert (top right)

“I was back at rehearsal the following night with Foden’s preparing for Brass in Concert and the gala concert with Matt Ford and Mike Lovatt in Gateshead.

The last coincidence though was that Mike’s CD ‘56 Degrees North’ with Foden’s sees proceeds go to the ‘Cancer Blows’ charity whose aim is to raise both awareness and money to encourage research in to blood cancer.”

Final piece of the jigsaw

However, one final piece of encouraging news came a few days after Brass in Concert, when DKMS were able to tell Adrian that his stem cells had been flown to the USA and had been used in the stem cell transplant process on an American woman.

“That was the last piece of the jigsaw,” he says.

“DKMS will now receive three updates from the patient’s doctor in the next two years which they will pass on to me. My fingers are crossed that the stem cells do their work!

It’s been an incredible experience and one that I cherish. I also urge everyone to help if they can. It’s the best thing that has happened to me in banding career – even better than winning the Nationals.”

If you are aged between 18 and 55, in good health, and are interested in becoming a donor, you can find out more information at: https://www.dkms.org.uk/en/register-now

Only between 4-5% of people who register will be matched with someone in the following 10 years, so it is DKMS’ objective to get enough people on the register so that there is matching donor for every blood cancer patient in need of a blood stem cell donation.