4BR Editor Iwan Fox finds out more about the remarkable history and ambitious future plans of the Amersham Band. 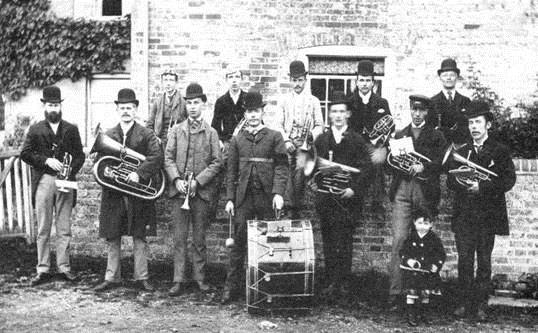 It’s a remarkable achievement for an organisation not readily found in one of the traditional heartlands of the brass band movement, but in a market town in Buckinghamshire just 30 miles or so from London.

However, as proud as it is of its heritage, the band is currently undertaking an incredible fund raising effort to secure the next 175 years of its future - already raising well over £200,000 of an ambitious £425,000 target to build a brand new community bandroom on a site near to the venue of its first recorded public performance.

That came in 1843 with a newspaper story about a brass band cricket match between Prestwood Brass Band and Amersham Band (won by Amersham by the substantial margin of 11 wickets) which set the tone for a community based band to flourish for the next 70 years under various guises such as the wonderfully entitled, Amersham Sons of Temperance Band.

Theirs is also a familiar brass banding history; temperance then certainly non-temperance, ups and downs, success and failure, sacrifice, dedication and commitment

Theirs is also a familiar brass banding history; temperance then certainly non-temperance, ups and downs, success and failure, sacrifice, dedication and commitment - all excellently chronicled and researched by band members Caroline Perkins and Fred Harrison.

There were Edwardian era wins contest wins at Newbury and Waddesdon and the loss of players in two World Wars, extended periods of inactivity and resurrection, nomadic rehearsal halls, investment in youth, and in the last few years in particular, regular competitive success and National Finals appearances. 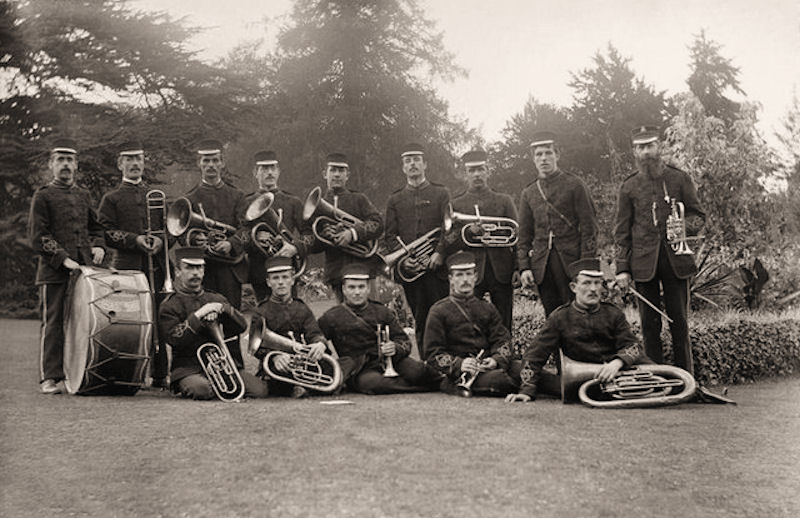 Fred told 4BR: “At the end of the nineteenth century, a local photographer, George Ward took charge of the band and this has left a rich legacy of photographs and other memorabilia, so that the current band, reformed in 1977 still retains that link to those pioneers

It’s a remarkable history and one we are very proud of. There have been periods of inactivity, but the town has somehow always needed a community brass band, be it supported by the likes of the Odd Fellows Society or the Ancient Order of Foresters, or simply as Amersham Town Band.”

Now, a very 21st century pioneering spirit is one of the reasons why the band has flourished in the last nine years under the direction of Paul Fisher, and why it now boasts close to 100 members actively playing week in week out in one of their four ensembles.

The senior Amersham Band is currently in the First Section of the London & Southern Counties Regional Championships, whilst Amersham Community Brass caters for developing players.

Then there is Brass Roots, for beginners and elementary pupils and Amersham Brass Ensemble & Quintet which plays at smaller community occasions and private events.

However, long term success means long term investment - and with their Methodist Church rehearsal home for the past 25 years failing to recruit the same number of new parishioners as the band does new members, its potential closure meant they had to start looking for a new permanent home.

“We’ve known for a while that we may have needed to move out,” Fred said. “We’ve been very fortunate to have been able to rehearse here for so long, but it’s never been our home.

We knew that if we were to develop and grow we needed a new home, so we started looking, although land prices in this part of Buckinghamshire and in Amersham where our roots lie isn’t cheap.” 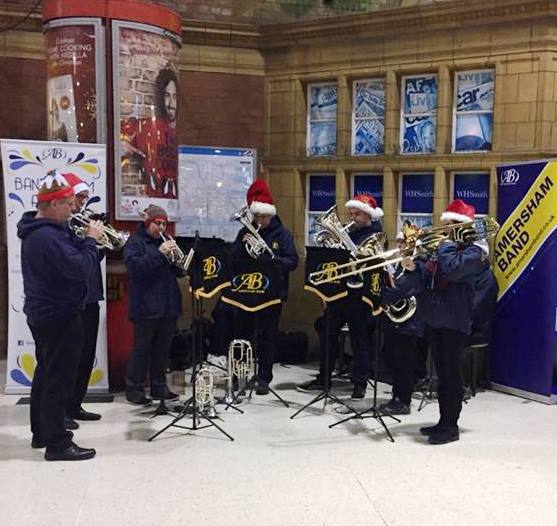 Thankfully a piece of land, not far from that old cricket pitch seemed ideal, and after a deal was struck and planning permission agreed, the daunting task was revealed: The band had to raise over £400,000 to build their future home.

Not only will it give them a permanent rehearsal venue, but it will enable the organisation to grow with plans for a youth band and further outreach work, as well as securing partnership links to other music groups and organisations within the local area.

It is planned to start a youth band, extend their Brass Roots teaching programme and to establish a Brass Academy.

Thankfully a piece of land, not far from that old cricket pitch seemed ideal, and after a deal was struck and planning permission agreed, the daunting task was revealed: The band had to raise over £400,000 to build their future home.

Amazingly, in just over two years, the band has already secured over £200,000 with the ambition to reach the target goal by the end of 2019.

“That has been a great start - but we still have so much to do,” Fred added. “We have enjoyed great help and advice from the likes of Rachel Veitch Straw when she was at Brass Bands England and others, but the best of course is that Paul Fisher is such an inspirational figure that we have flourished both on and off the contest stage.

The senior band is getting better and better, the Community Band goes from strength to strength and more and more youngsters want to learn to play.”

To ensure no-one loses out on the opportunity to enjoy group music-making, the band has now established a bursary fund for those in need of financial help to offset the costs of membership, instruments and travel. 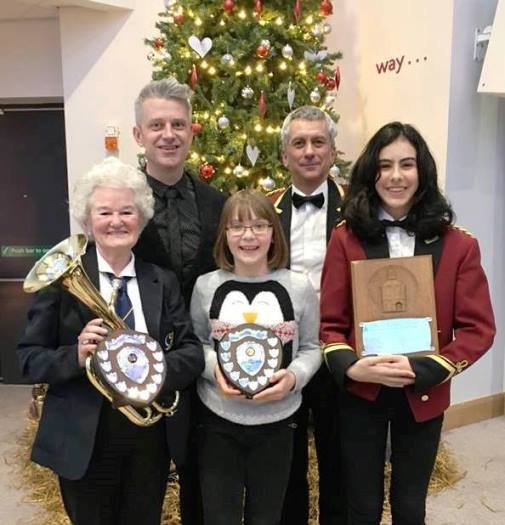 Fun and enjoyment is the key for players of all ages...

For Paul, a highly respected professional musician who plays trombone on many of the leading West End productions and shows, that is the key to his long term involvement.

“The management at Amersham is first class and so professional, allowing me to concentrate on what I believe I do best,” he said.

With people such as Fred, Caroline and others working successfully towards ambitious but thoroughly realistic plans, gives everyone such a boost of collective confidence.

I believe that music making should in inclusive, challenging and fun. I want people to enjoy coming to band, to keep on learning and improving and to share a common goal that benefits their community.”

​I believe that music making should in inclusive, challenging and fun. I want people to enjoy coming to band, to keep on learning and improving and to share a common goal that benefits their community

He added: “Over the last few years we have done that and now some people who have been on the journey with me from the Fourth Section to the First are investing their experience in our Community Band - enabling themselves and others to keep playing and keep enjoying making music together.

I only came to Amersham to help out at first, but now it’s taken over my life - and I love it.” 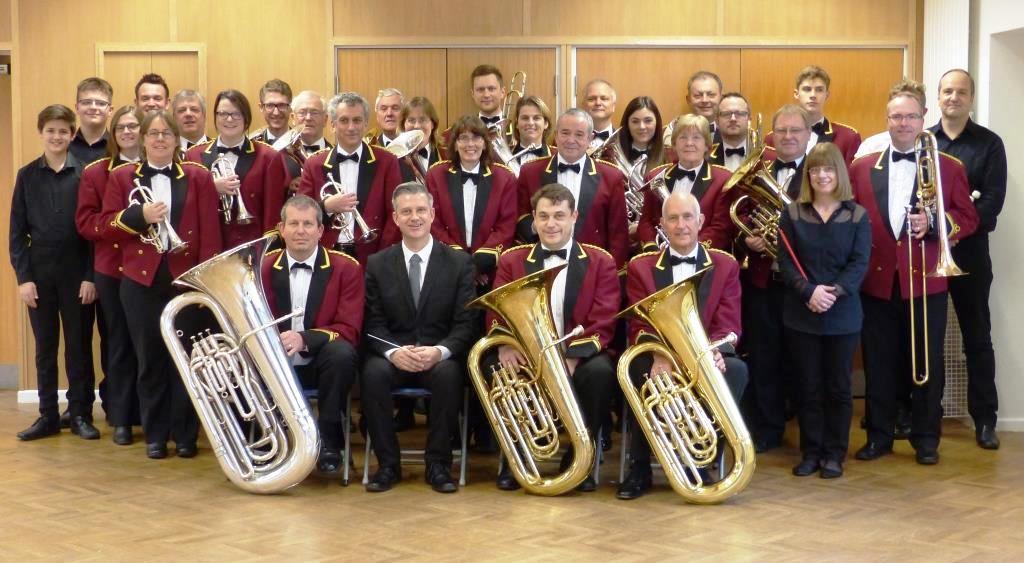 Further evidence of that success will see Amersham Community Brass enter the London & Southern Counties Fourth Section Championship in Stevenage in a few weeks time, whilst that fund raising work continues to bring in extra funds week after week.

Amersham’s story is certainly one that should inspire any band, and as Fred Harrison concluded: “That appearance will be another proud moment in the of Amersham Band, with many more to come – all topped off we all hope in the near future with the opening of our new bandroom.”

175 years of history to celebrate, 175 years of future brass band music making to come then...

To find out more about Amersham Band go to: http://amershamband.com/