McQueen's Instrument Repairs and Renovations
A Triumph of Time

The renowned instrument repairers help restore all sorts of things to past glories — from the Premiership Trophy to a 103 year old euphonium. 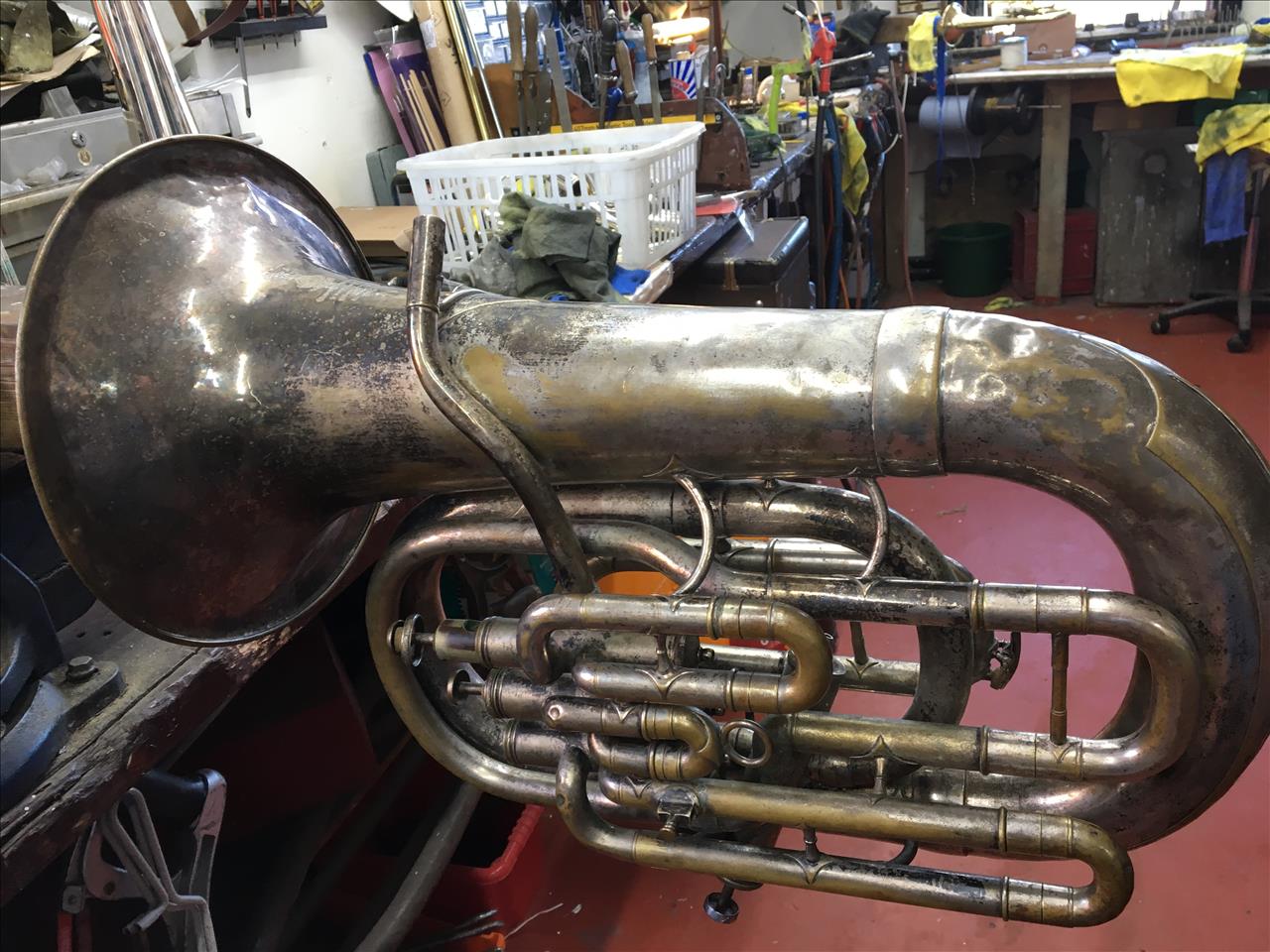 An old star in need of overhaul surgery...

Old instruments like ageing Hollywood actors can sometimes benefit from an expert bit of overhaul surgery.

Steven Mead recently purchased a rather decrepid euphonium from a friend: Forlorn, battered and seized it should have been ready for the instrument equivalent of a retirement home for aged contest stage performers. Not surprising really as it came off the production line in St Alban’s in 1915 - the same year Ingrid Bergman and Orson Welles were born.

The Salvation Army Class A ‘The Triumph’, was anything but.  The dents, grime and pockmarks told a story of use and misuse. It was in a sorry state.

However, there was still something about this former star that intrigued Steve - a glint of past glory. So after getting in touch with his friend Andy Kershaw and researching its provenance, a rather sad, more than bashed and battered euphonium was given the promise of a new, caring home.

The Salvation Army Class A ‘The Triumph’, was anything but.  The dents, grime and pockmarks told a story of use and misuse. It was in a sorry state.

“As soon as I saw the instrument on Facebook I was intrigued by it,” Steve said. “The link with the Salvation Army was obvious but it still seemed to be a little bit different - the shape was unlike any old euphonium I’d seen before. I simply wanted to play it, but after trying to have a blow I knew that it needed a complete restoration.

The valve speed was glacial to say the least, it leaked air like an old bicycle tyre and to forgive a pun, it looked well beyond salvation.

There was only one person I could think of who could bring it back to working order, so I contacted Rick McQueeney at McQueen's Musical Instrument Repairs in Manchester and asked him to have a look.” 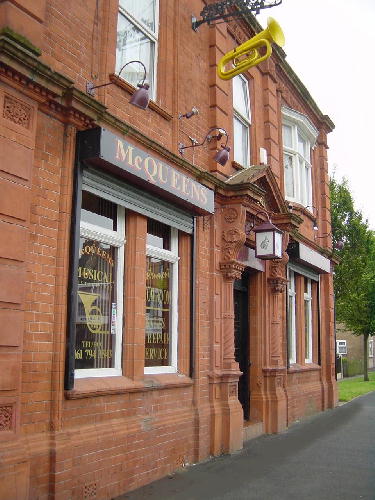 The workshop with a worldwide reputation

McQueen’s has a worldwide reputation for the excellence of its repairs and restorations – and not just on brass instruments.

A little while ago they gave the Premier League Trophy a much needed overhaul, and they have also restored the FA Cup (below) and the BBC Sports Personality of the Year trophy.

All corners of the globe

Started by Rick McQueeney in 1985 it now attracts customers from all corners of the globe, as Rick told 4BR with a chuckle.

“It’s incredible. Each morning we get packages from countries that we sometimes have to look up on the map! In the past few weeks alone we have had items from Peru and Brazil as well as the a little closer to home from Yorkshire and Scotland.” 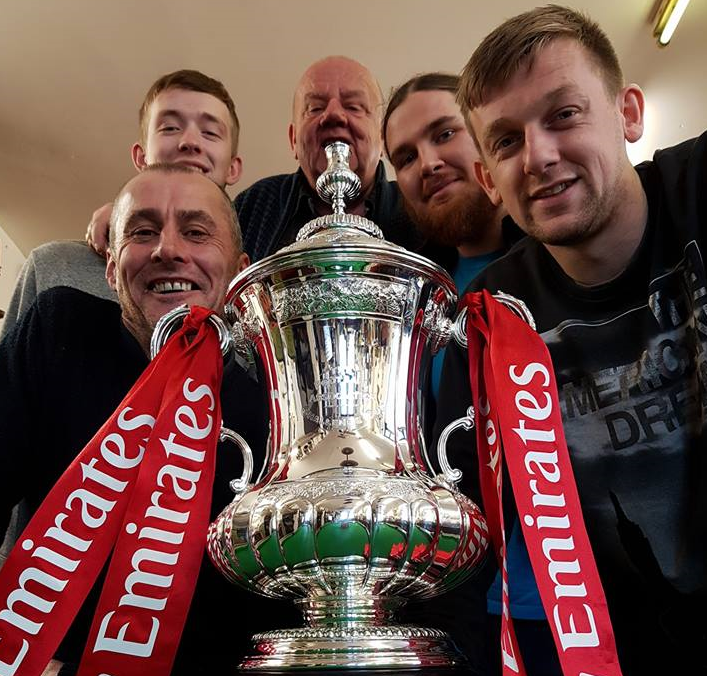 Which lucky player will get their hands on this later this year?

Rick has over 45 years of experience to his name - being one of the last craftsman apprentices who had to learn all aspects of their trade.

As a result, his work and that of his four other long term members of staff, including his son, is valued by individual customers and bands as well as the likes of the Football Associaiton, Premier League and the Ministry of Defence.

“Quality craftsmanship comes with years of experience,” he said. “I learnt from some great men at Barratts of Manchester and their attention to detail and pride in their work has never left me.

Now I ensure we take our time and that our reputation for quality is never undermined.  It means we do have a waiting list, but it also means we don’t get complaints about our work.”

Now I ensure we take our time and that our reputation for quality is never undermined.  It means we do have a waiting list, but it also means we don’t get complaints about our work 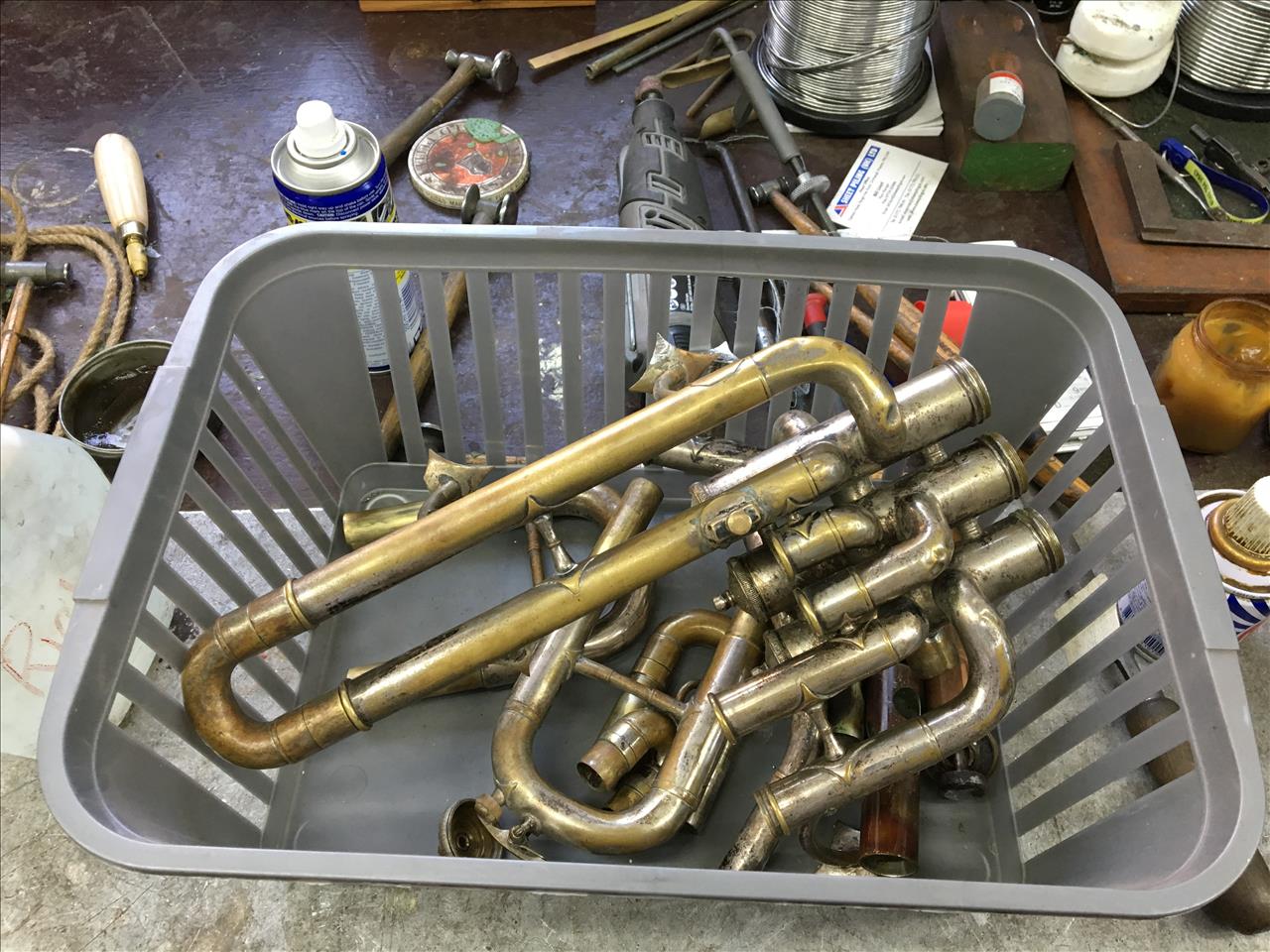 That was certainly the outcome with Steve’s old instrument, although Rick revealed it very quickly became a Frankenstein series of body parts that were rather unceremoniously placed in a plastic container soon after it was dropped off by Steve at the workshop in Manchester.

“After discussing what Steve wanted I got to work,” Rick said.

“Taking it apart was easy enough - heating the joints to soften the 40/60 solder mix which is the same today as when this instrument was made over a hundred years ago.

The valves were the biggest problem though – with one needed to be totally remade from scratch and the other three rebuilt as they were so badly worn.

I love working on these old instruments though as the quality of the brass is so much better and you can see the handmade care that has gone into making them." 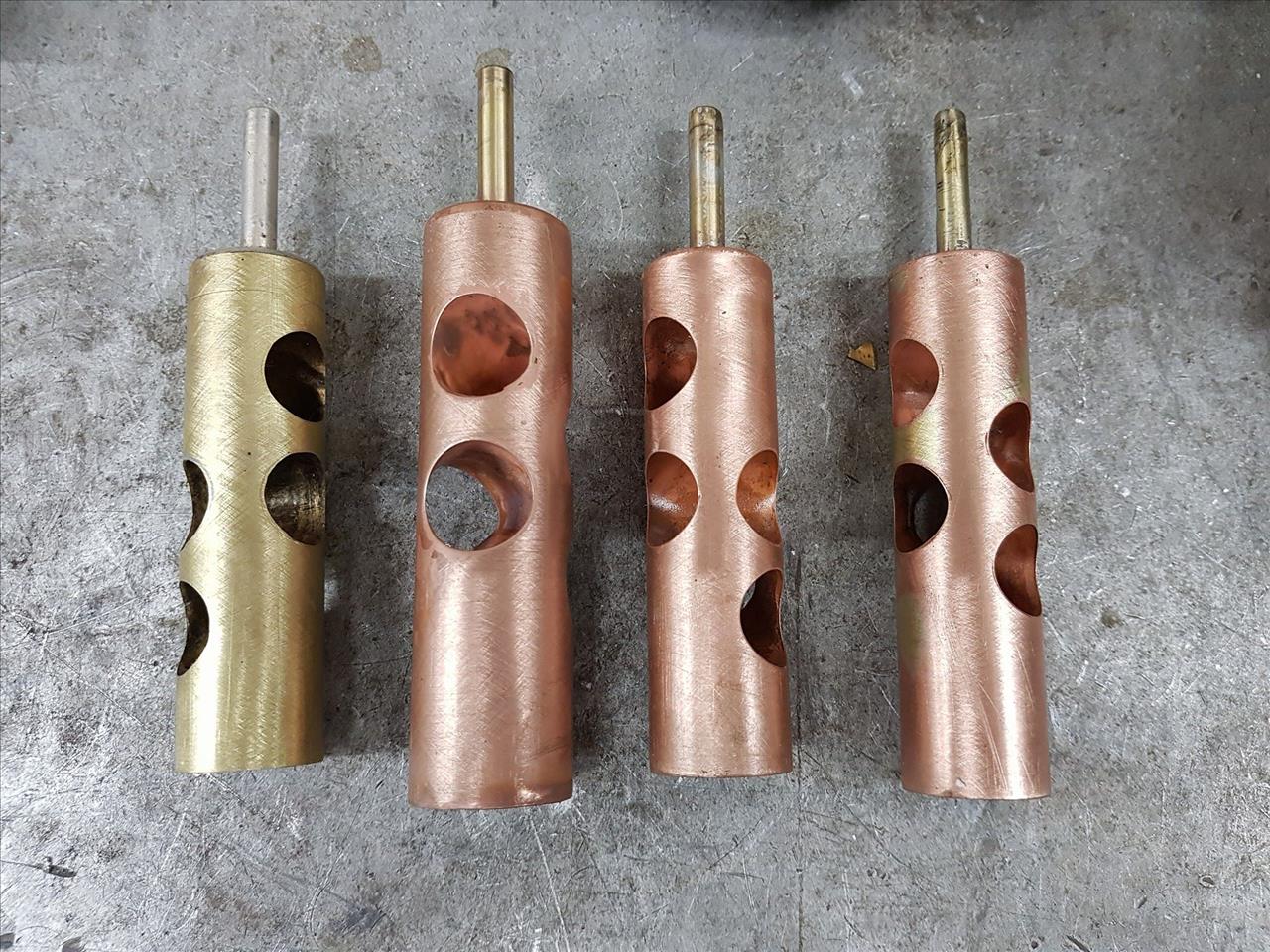 He added: "Modern instruments are made with what I call ‘soft brass’ that doesn’t have that crispness of feel and makes the instrument sound dull to me. I don’t know how many will last a hundred years or more like the one Steve brought in.”

This is where all those years of experience came into play, with Rick making a brand new valve, puncturing and drilling the holes and aligning things to perfection in hard brass – all without the use of a single bit of computer wizardry.

“The traditional methods are still the best,” he says. “The instrument comes to life in your hands. It’s a bit like heart surgery – get it right and the instrument is in perfect health.

Get it wrong and it soon ends up in the box. With ‘The Triumph’ we had to put it all back together to make sure the valve block didn’t leak and everything worked perfectly.”

The instrument comes to life in your hands. It’s a bit like heart surgery – get it right and the instrument is in perfect health. 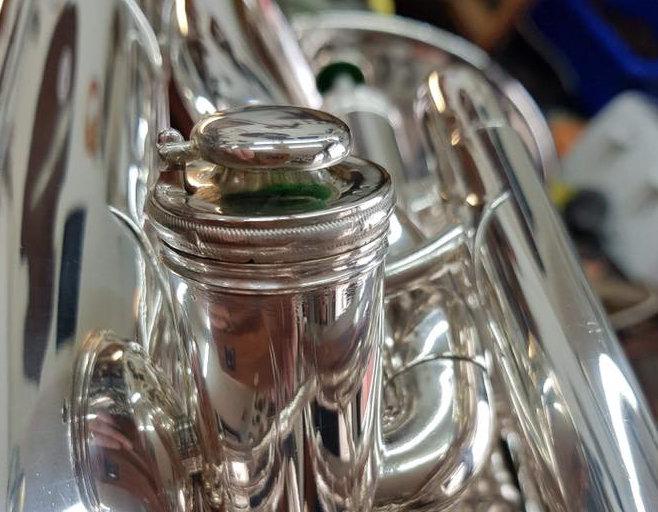 Rick admits that he put in over 50 hours or more in restoring ‘The Triumph’ to its former glory – although like all instruments that come to his workshop, it wasn’t the time but the end result that mattered to him most.

“The processes we go through – from the making of new parts to the removal of dents and imperfections, burnishing and polishing in taking instruments such as ‘The Triumph’ back to the base metal, takes time, but it is all worth it when you hear it being played again.”

The processes we go through – from the making of new parts to the removal of dents and imperfections, burnishing and polishing in taking instruments such as ‘The Triumph’ back to the base metal, takes time, but it is all worth it when you hear it being played again

The final step in this case was to add style to be added to the substance.

“The instrument has to look as good as it sounds – so we ensure that it’s taken back to its base finish before its dipped in a tank for its ‘undercoat’ finish.

When that’s completed it goes into our main tanks for at least three hours to be electroplated with silver.  Then we put it all back together and give the instrument its final mirror polish.” 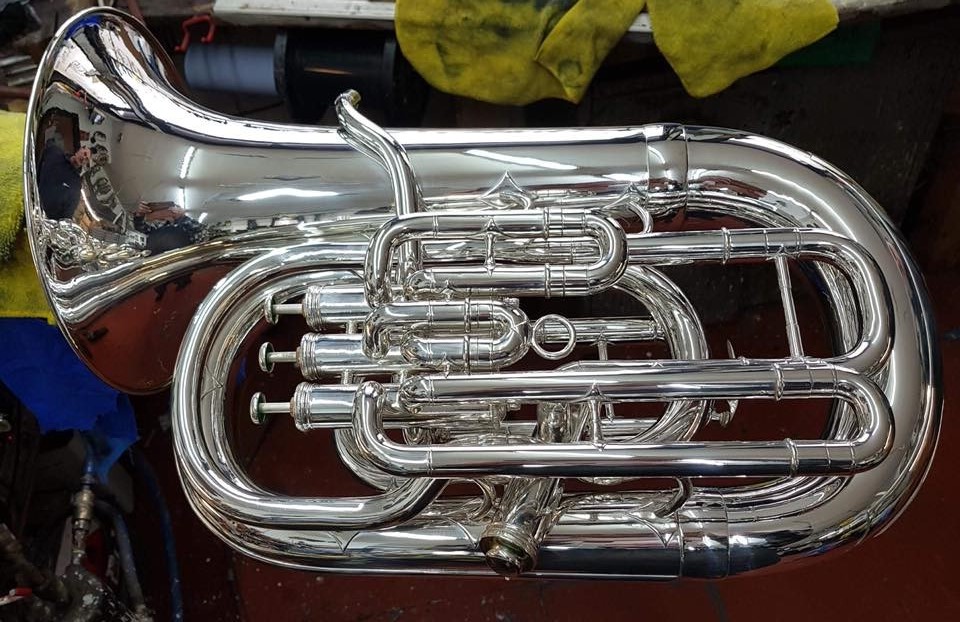 Throughout the process Steven Mead received regular updates on progress – accompanied by photographs of the instrument as it started on its long journey back to pristine condition, and just after Christmas he got the call he had been waiting for and he set off to Manchester to pick up the instrument.

The restoration job was incredible.

“It was an amazing piece of expert craftsmanship,” Steve said. “It was literally like new and it played so beautifully too, with a focussed, sweet sound throughout the range and excellent tuning right up to the top.

The valves now work brilliantly thanks to the craftsmanship of Rick and his team, and I’m sure the finish is probably superior to that when it was originally made!” 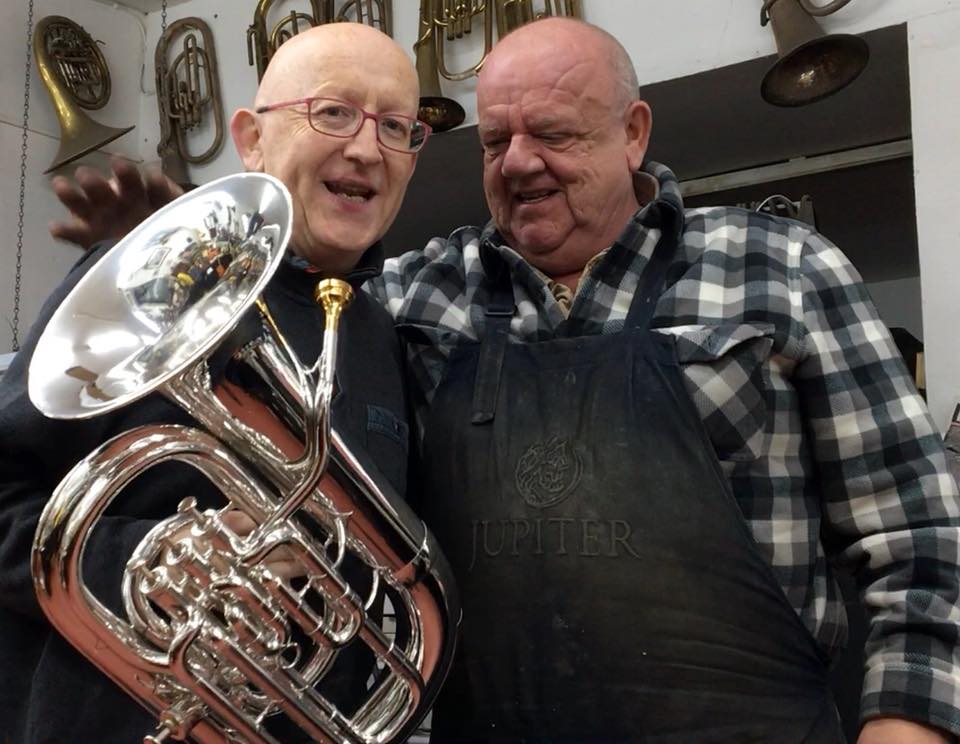 A vote of thanks - Steve with Rick

As part of the restoration work, Rick kept a restoration ‘diary’ which was posted on Facebook and which has now been seen over 200,000 times gaining hundreds of messages from people engrossed, engaged and even emotionally linked to the transformation.

“I hope people watch the video and admire just what Rick has done. I can’t thank him enough although I can assure him his work will be both seen as well as heard for many more years to come as I will feature the ‘The Triumph’ in concerts with the first one being in Bournemouth on March 11th.

You can see exactly what work went into restoring Steve's instrument at: 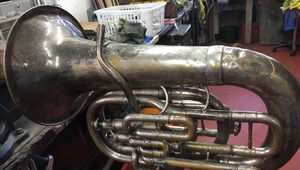 Renowned instrument repairers McQueens help restore all sorts of things to past glories — from the Premiership Trophy to a 103 year old euphonium. 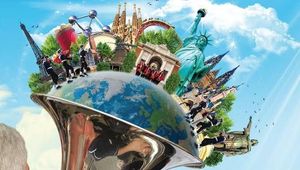 Group tour operator, Rayburn Tours has launched its new website and has a host of brilliant destinations for bands to consider for truly memorable tours in 2017 and 2018 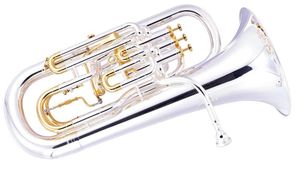 Kim Holly Thorp-Simpson has been putting the Elliott Professional Model Euphonium through its paces - and its quality in every aspect has shone through. 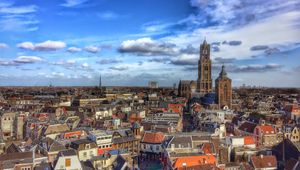 The welcoming Dutch city of Utrecht will host the 2018 European Championships - and its a great place to visit and enjoy the best of brass.