4BR Editor Iwan Fox looks forward to the action in the Challenge Section and European Youth Championships in Oostende. 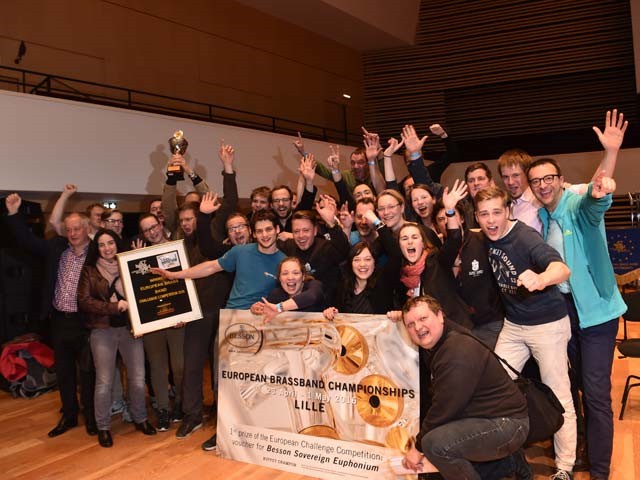 Who will follow in Brass Band Sachsen's footsteps to be crowned B Section champion?

In addition to the Blue Riband Championship Section contest, EBBA continues to provide a platform for the emerging banding nations of Europe as well for the next generation of performers.

The Challenge Section competition has led a curious life - initially called the B Section from 1994 to 2013 before being rebranded and revamped under its new identity in 2014.

Then it was announced, according to EBBA President Ulf Rosenberg that it had been changed to, ‘...challenge countries that don’t have well-developed brass band movements or are unable to have bands qualify through a national contest... to have the opportunity of experiencing a well-organised competitive environment, and to enjoy the benefits of preparing for and participating in such an event, providing them with a goal to help improve their musical abilities’.

Laudable stuff indeed, but truth be told, it remains something of a hit and miss success - the hits certainly coming from the introduction of bands from the emerging nations of Germany, Italy and Lithuania who since gone on to set up National Championship events, although the presence of competitors from Scotland, and this year Belgium, seems to rather fly in the face of its ethos and purpose.

Perhaps the time has come to clarify once and for all what the purpose of the contest is: A second tier ‘Europa Cup’ event to the top flight ‘Champions League’ or a development event to encourage new EBBA members?4BR

Perhaps the time has come to clarify once and for all what the purpose of the contest is: A second tier ‘Europa Cup’ event to the top flight ‘Champions League’ or a development event to encourage new EBBA members? It cannot be both. 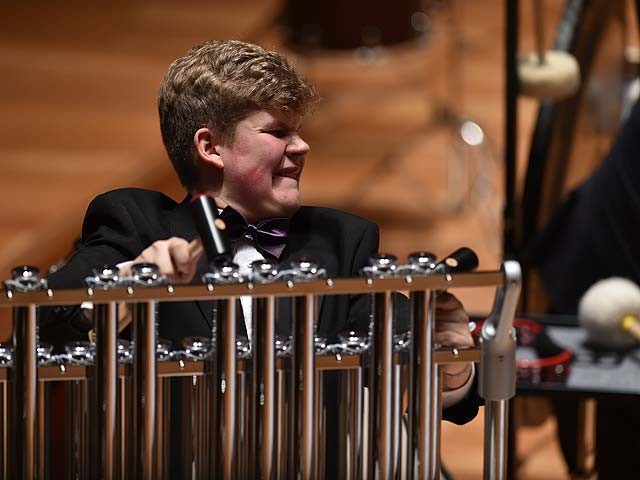 Germany is represented by their Second Division National champion Brass Band Regensburg, with Scottish hopes resting on the shoulders of Coalburn Silver, who won the Second Section Scottish Championship title in 2016 but who now competes in the First Section.

Own choice works being played include ‘Blackout’ (Thomas Doss); ‘Fire in the Blood’ (Paul Lovatt-Cooper); ‘The Bandsman’s Challenge’ (Bertrand Moren); ‘The Land of the Long White Cloud’ (Philip Sparke); ‘Prisms’ (Peter Graham) and ‘A Day in the life of a Knight (Phil Lawrence).

The set work is the intriguingly entitled, ‘Insomnia’ by Belgian composer Bert Picquer. It is inspired by the poem of the same name by the pre-Raphaelite poet Dante Gabriel Rossetti, which opens with the words:

Thin are the night-skirts left behind
By daybreak hours that onward creep,
And thin, alas! the shred of sleep
That wavers with the spirit’s wind:

Rossetti suffered with the illness for many years following the death of his wife (although Picquer does not) - one that led him to a complete mental health breakdown. It is work of incessant rhythmic patterns that call for ensemble cohesion and continuity, a wide dynamic range and the ability of players to recite a few lines of poetry.

It is work of incessant rhythmic patterns that call for ensemble cohesion and continuity, a wide dynamic range and the ability of players to recite a few lines of poetry4BR.

However, it is not a work of cold depression, but one that the composer describes as ‘...an eclectic set up of elements, containing references to minimal music and serial music, but also baroque (chorale and fugal exposition), and even a touch of jazz and ethnic rhythms’.

He adds that it has been his intention to enable players to ‘bring all those influences into a consistent spectacle’ - and ‘to enjoy’.

A hard one to call but we think it could be close between home favourites Brass Band Panta Rhei and Italian Brass, with, 1st Old Boys, Coalburn, Brass Band Regensburg and Sunday Brass not far behind. 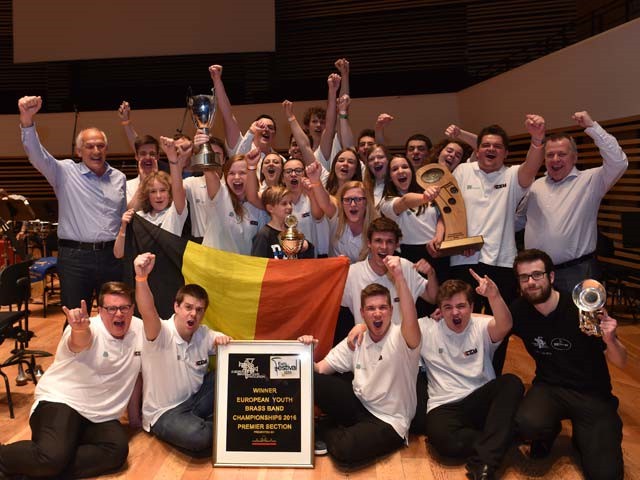 The 40th European Brass Band Championships will come to an end on Sunday with what promises to be a wonderful event.

Then there are also the rather liberal differences in what actually constitutes a ‘youth’ in different regions of Europe.

EBBA has rather played the role of Pontius Pilate by leaving it up to each EBBA member country to decide how they chose their representative bands (which may be community, regional, school, national or even ‘project’ ensembles of up to 50 players), whilst allowing the age limits to be 18 years or under for the Development Section and 22 years or under for the Premier Section come these championships.

It’s as messy as it is incomprehensible - much like the 37 page EU document outlining the laws governing what it and what isn’t deemed a fruit juice. Last year 13 bands took part - this year it’s 10.  Next year who knows?

Much like the Challenge Section and the other additional competitions for Composers, Conductors and Soloists, it needs an urgent structural rethink if it is to prosper in future. 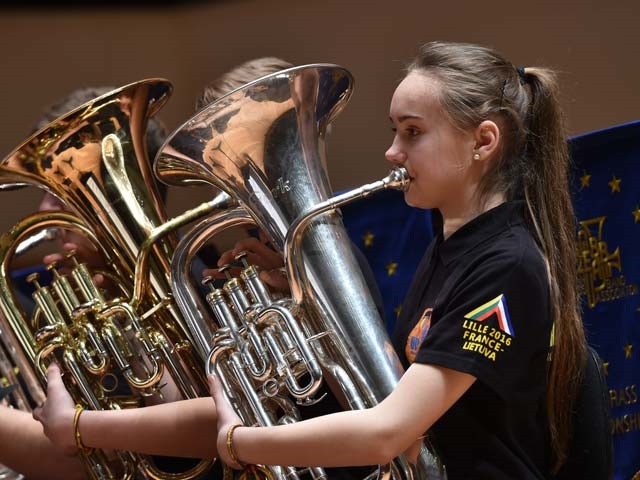 Pride in place in representing their countries

Hopefully, EBBA has been listening - especially after the rather shameful way in which the participants and their families were financially squeezed last year until the last Euros popped out of their pockets to get in to hear bands play.

Hopefully, EBBA has been listening - especially after the rather shameful way in which the participants and their families were financially squeezed last year until the last Euros popped out of their pockets to get in to hear bands play4BR.

When the doors were finally opened for free it made for a quite brilliant event - helped by the performance of the European Youth Band in what was the best advert that EBBA could have hoped for to inspire youngsters (although rather oddly, only up to the age of 21.)

This year the four bands in the Premier Section will have to perform ‘Dimensions’ by Peter Graham - one of his early compositions as the set-work, with the six Development Section bands tackling Malcolm Arnold’s wonderful ‘Little Suite No 2’. 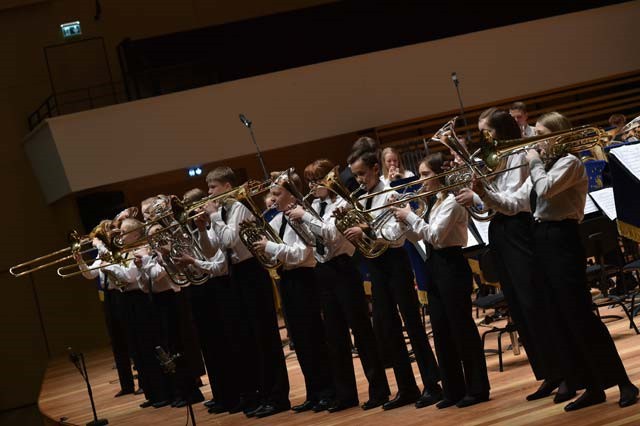 The judges will also have to compare and contrast some engaging repertoire to compliment these major works in their short programmes - with some particularly ambitious stuff on show in the Premier event, where defending champion Young Willebroek from Belgium are up against a strong field of rivals including Youth Brass 2000 from England, Swedish Youth and Berner Oberland Junior from Switzerland.

In the Development Section, the defending champion is Tertnes Skoles from Norway, who are joined by their counterparts Manger Skulemusikklag alongside Scottish Borders Youth, 1st Old Boys Youth from Northern Ireland, Aukstyn from Lithuania and Elland Silver Youth from England.

4BR will be there to enjoy the action and bring you plenty of coverage, interviews and images – so if you plan to stay in Oostende over the weekend make sure you come along and support a great event.