All the action from the 2017 Butlins Mineworkers Championship Section 3 — as it happened. 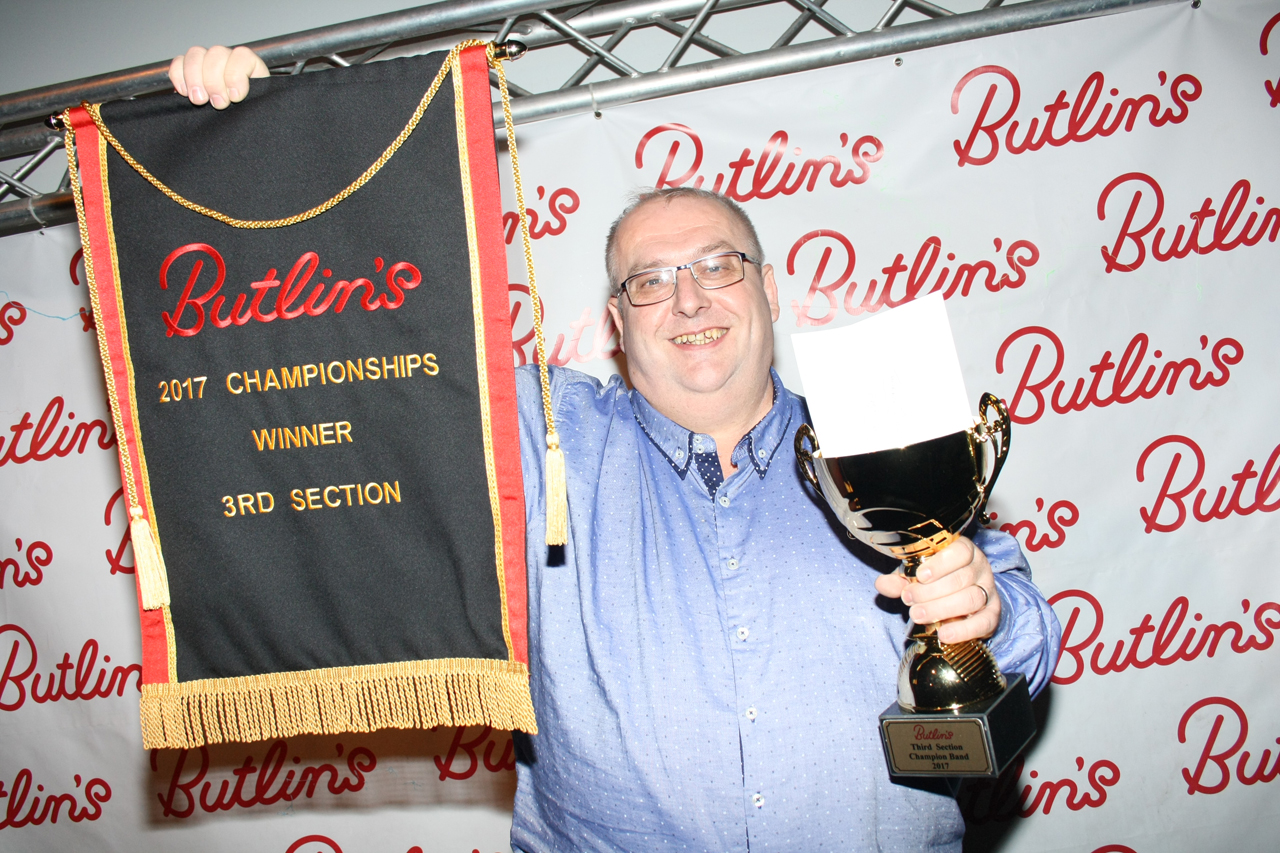 Wilson Taylor's contest round up and prediction:

An enjoyable contest that brought the best — and occasionally the worst out of the bands today. It's was a piece that asked question of the players and the MDs and the best responded splendidly.

Those best for us came from Ifton, Shirland and Stamford, with Audley, Dodworth and East Coast Brass not far behind. This could be a contest with quite a few potential winners in the mind of the judges.

Another band that nailed the opening — although the intonation occasionally grates. The fugue figure is so well controlled and full of style to close. When the second section settles there is some delightful musicality of show — led by super sop. Just needs a little more confidence in places but not euph — splendido!! Lots of energy and drive to close the final section too — although it wasn't without error.

A band that set its stall out with a super opening — so precise, led by top man. Euph needed to project a bit more in places, as the ensemble occasionally loses focus, but it recovers so well. Bravo MD. Well done cornet and again the dynamic contrasts are risked by the MD. The energy flows with the finale — to round off a very well thought out and delivered account.

What a great start — full of character and dynamic contrasts. Some little moments of unease, but it does not spoil. The solo playing is so well delivered — tuba to cornet and more besides. The slow, lyricism shown here is great. Perhaps in need of a little more emotion, but that may be a personal choice. Great close finishes off a very solid, well managed account.

Intonation just spoils an impressive opening and it becomes a bit of a recurring problem as we go along. It's a pity as the music flows and has a fine presence. Bravo tuba and cornet recovers as the passion flows. Lots to enjoy here. It gets a bit tired to close, but the flow and sense of brio is retained. What a pity about that poor tuning.

Such a strong but controlled opening pays off, and it progresses so well too. Bravo flugel and cornet — with the ensemble so rhythmically precise too. The MD takes risks with dynamics and it pays off, even if intonation wavers. What a great finish though — splendid playing, full of verve and brio. Right up there for us.

Such a strong and commanding opening really shows the intent — even if it does a bit edgy in places. It's the same story as we progress — it's all laid out; colourful and with character. Solo cornet and euph are excellent — so artistic, but things are getting dynamically strong. The details is lost somewhat in the final sections in search of the excitement. There was plenty of of that there today. 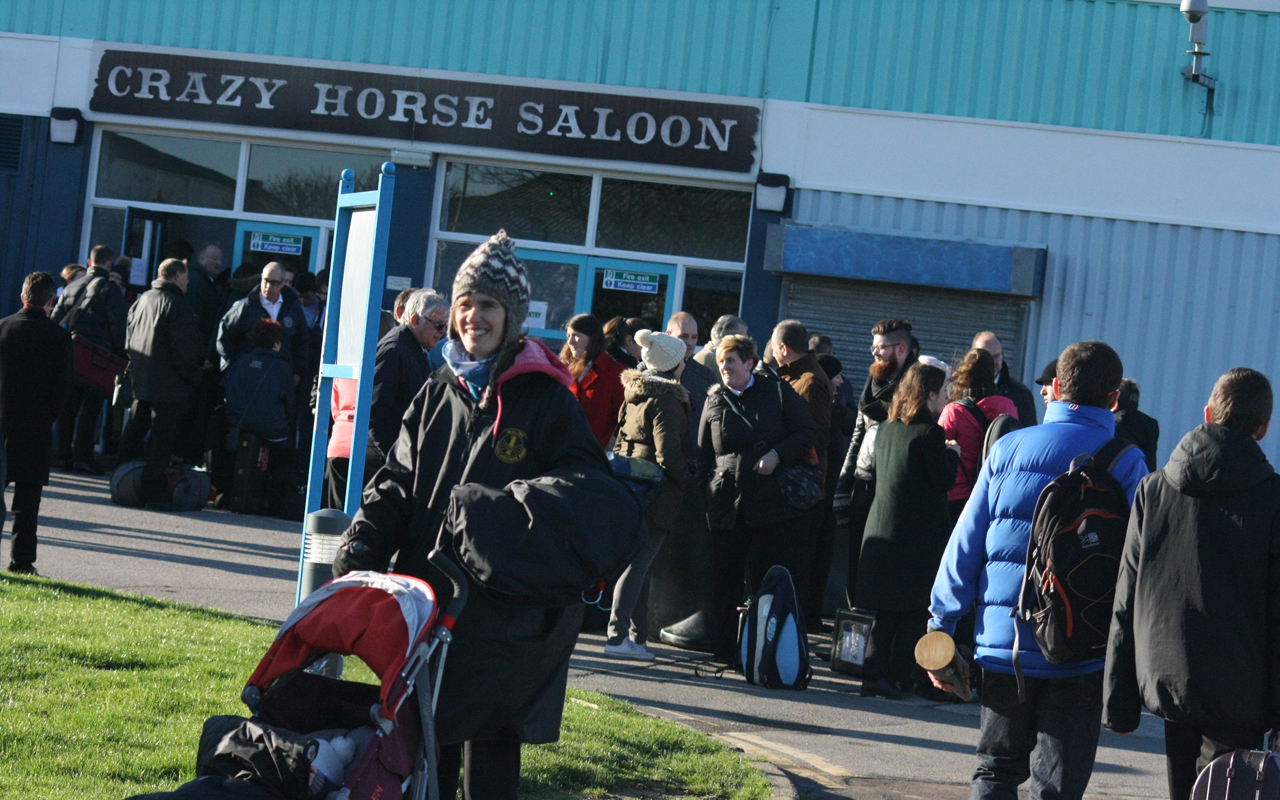 A busy venue for the 3rd section

It's been a very enjoybale contest so far (despite the lack of a number 1 band), and each band has given the judges plenty to think about.

Two do stand out though — with Shirland Welfare and Greenfield battling for the top places ahead of spirited accounts from Dodworth and East Coast Brass. Lots to play for though.

A contrasting performance this — although it kept you interested from the word go. Perhaps needed a bit more brio to open, but it has a sense of control and flowing musicality. Super flugel is a star, but elsewhere it just sounds a little uneasy. The bold ensemble work is their best — thrillingly so.

What a fine show — right from the first note to the last. So much to enjoy with the warm ensemble sounds, balance and precision. A couple of moments of intonation creep in, but it soon passes. Bravo cornet (and 3rd man). Lots of control and lyricism and then there is enough in the tank for a super close.

Balanced and reserved to open, it takes its time to find its feet, but when it does it gets better. What a pity it sounds a little nervous as the musical picture is so well portrayed. What a super sop and flugel is not far behind — why didn't they play like this to start? It closes well, but a performance that was just a bit too inconsistent.

A measured sense of tempo give things a stately start, but it gets scrappy. Some nerves just take the gloss off a fine musical picture and the detail is lost. The broad sweep of the music is nicely portrayed but those little messy elements may just cost. A pity that.

What a cracking band sound — full, warm and balanced. This is confident stuff added by excellent euph and fine dynamics. Each movement has style and character — and had momentum and focus right to the close. Good stuff that, good stuff indeed.

A bold opening makes the mark even if tuning is a little scratchy and the second movement also takes time to settle. It gets better as we go along with a lovely cornet lead which is so impressive. Holds it focus to a well managed end too.

We do not know why but the first band failed to take to the stage. We will try to find out why and let you know. 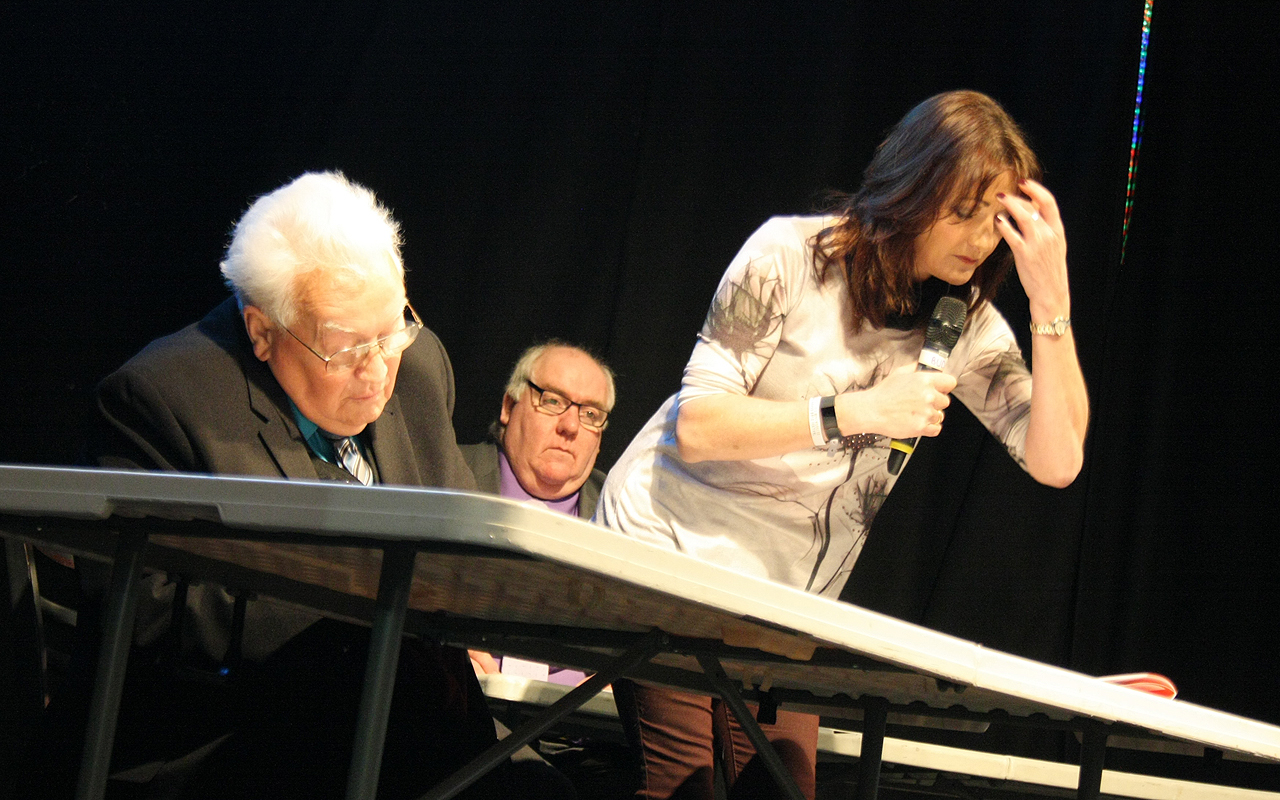 At the draw with Jo Wheeler, Brian Eggleshaw and Mick Vasey

The Third Section at the wonderfully named Crazy Horse venue kicks off at 11.00am, so we will put up the draw when the judges are safely in the box....