Book Early — The rise and fall of the Pontin's Championship

40 years after it all first started, 4BR Editor Iwan Fox looks back at an event that changed the contesting face of banding in the UK. 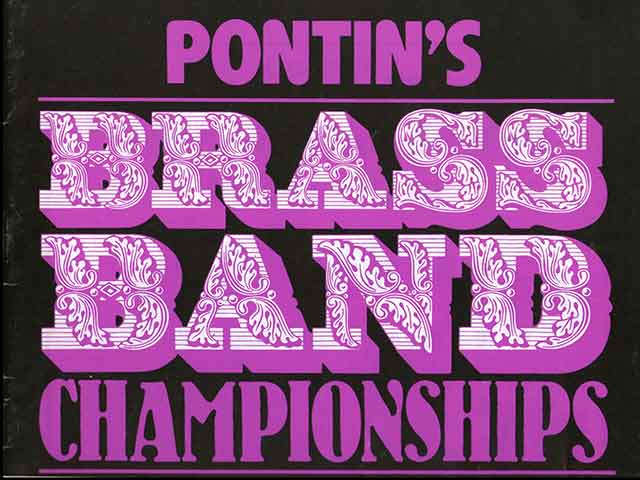 A very significant brass band anniversary has just passed without a flicker of notice.

40 years ago, the Prescot Band from the North West of England organised a contest that was to eventually become one of the biggest brass band events in the world.

Within a few years of Bold Miners conducted by E. Stirrup, taking to the stage in the Fourth Section at a holiday centre in Ainsdale near Southport in April 1974, the fledgling Pontin's Championship had become a startling success.

At its peak, the company was investing over £30,000 a year in prize money and travel allowances to attract over 300 bands from every corner of the UK (and the occasional European visitor) to compete at its trio of Easter qualifying contests and Grand Final.

That it lasted 37 years (finally ending in tacky financial ignominy in 2010) was testament not just to the enthusiasm of the bands drawn to the heady mix of big cash payouts and late night revelry, but to the fact that the founder, Fred Pontin and his successors, knew exactly how to milk a good idea for all it was worth. 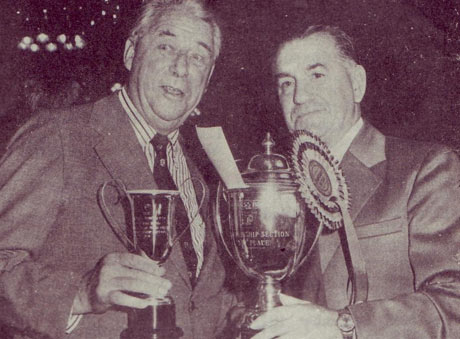 Fred was no wide eyed brass band romantic (despite his initial well reported enthusiasm): A shrewd and calculating businessman, the display of bonhomie found in his annual message (Book Early!) in the Championship Finals programme only actually lasted until 1978, by which time he had been knighted and had sold off his empire for a cool £56 million.

By then though, the money was rolling in from the bands.

In 1976, the plan was to hold the finals at Wembley Conference Centre, but such was the response to the first set of qualification contests at Brean Sands, Southport and Hemsby, that the old rogue soon shipped it to a windswept former army base in Prestatyn - where it stayed until its death throes in 2010.

The reason was simple: It gave the ideal opportunity to fill the North Wales ‘holiday village’ for one more weekend before it closed for the winter break.

Hungry (and very thirsty) bandsmen and women also provided the ideal customer to empty the shelves and barrels of cheap ‘sell by date’ stock. 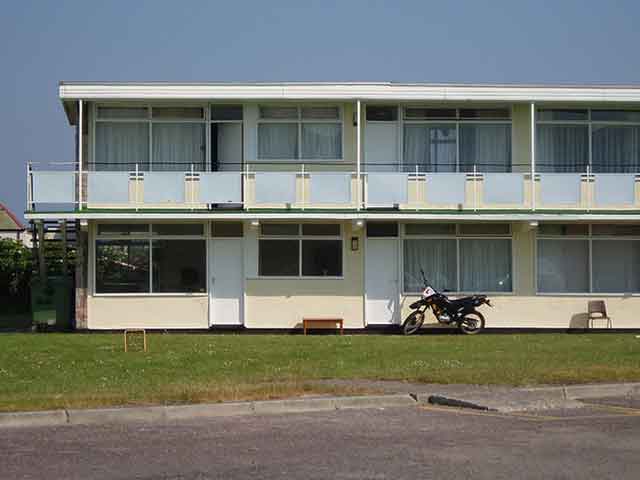 Swanbrook Transport may have won the first ever £1,000 top prize in 1977, but it was the attraction of hefty payouts at the Easter Bank Holiday events (£600, £400, £350 & £300 to the section winners), generous travel allowances (soon up to 30p a mile) and a six day self catering break for three people costing £25 (with additional 25% off if one of you was playing in a competing band) that really reeled in the punters.

At a time when winning a Championship Area title came with a first prize of £70, and with the regional contests themselves spread out over three months or more, the contest triggered the imagination as well as the bank balances.

The effect was startling; with competitive fields of up to 30 bands in each section making their way to the seaside resorts in a bid to claim a qualification place and cash (the top six bands were awarded prize money).

As a result, the next decade or more was the golden era for the Pontin's contests - helped by hard working volunteers and fronted by the best PR man in the business next to old Freddie himself - Harry Mortimer.

As one wry bandsman remarked at the time, it was like having the endorsement of the Pope to sell prophylactics to the masses. 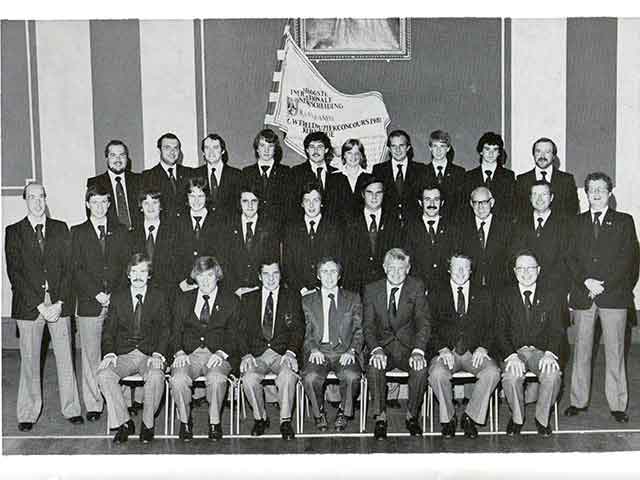 By the 1990s times and bands were changing though.

The contests themselves had begun to stagnate long before what was once a weekend banding break became a single contest day; the reorganisation of the Area contests and introduction of the new First Section, the lingering after effects of the Miners’ Strike and financial austerity seeing entries taper away.

Although the Easter events limped on until 1994, the lack of investment in the older Pontin's sites was marked (the company was sold three more times by 1989 and was rapidly downsizing).

An Easter break in Brean Sands didn’t quite hold the same attraction as a weekend away in Barcelona.

By 1991, Managing Director Graham Parr was already speaking of it being a ‘difficult year in many respects’ and by 1994 the writing was on the wall - with a Second Section contest in Southport only having  the one entrant, despite a first prize of £500.  Just four bands competed at the Finals.

Meanwhile, younger players found the cheap beer and down market entertainment more of a heady mix of pleasure than the rather dated test piece choices. 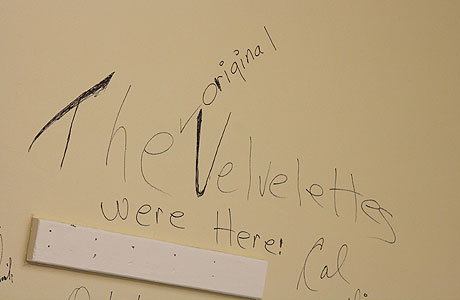 Pontin's hadn’t changed - but people had.

They tried to catch up. What had once been ‘Bingo’ and a ‘Last Waltz’ became the Bavarian Stompers and 20/20 Mad Dog chasers: The era of ‘Lovely Legs’ and ‘Miss Beautiful Brass Band’ competitions, ‘Reunion’ weekends and the Russ Lewis Showband were gone.

It wasn’t enough. With the Easter contests dropped, a cold November weekend in Prestatyn became an excuse for a banding blow out of a non-musical kind.

Pontin's had to issue warnings in the programme of their intention to withhold prize money in cases of ‘bad behaviour’ and (rather showing their paternal attitudes) ‘rowdyism’.

Despite the hard work of the contest volunteers, and with a bolstered prize pot, travel allowances and holiday vouchers, the Millennium saw a tired Pontin's Championship enter the last years of its banding life.

It still managed to produce some memorable occasions though.

The 30th anniversary event saw the last flourish of entrants (thanks to the hard work of Frank Hodges and his team on the Pontin's Brass Band Committee, who kept the contest afloat) whilst in 2008, Major Peter Parkes claimed the last of his remarkable 86 contest victories when he led Sovereign Brass to the first prize £2,500 on ‘Cloudcather Fells’. 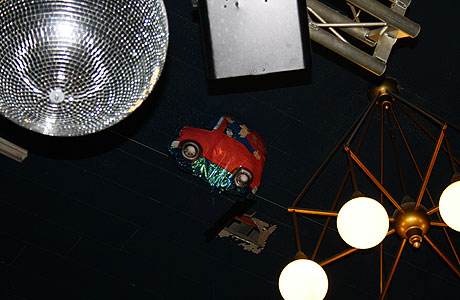 Even Postman Pat wanted out by the end...

By now though the Prestatyn resort was shabby and dated (reflected in the entertainment as well as the decor), and the contest was a shadow of its former self.

The Butlins Mineworkers Championship was soon proving to be a much more attractive contesting proposition, the top bands were no longer interested in competing and the contests were blighted by late withdrawals.

However, when it did eventually come, the death of a remarkable Championship, aged 37, was still messy, troubling and bordering on the criminal. 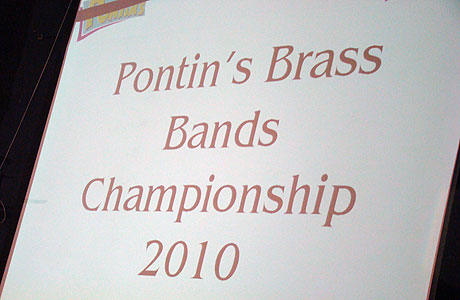 The 2010 event went ahead with the promise of a further boost to prize money (£3,000 to the winners of the Harry & Margaret Mortimer Championship - £2,500 to each section winner), although fewer bands competed than in previous years.

The last top flight winners were to be Marsden Silver, the last band to take to a Pontin's stage following in the footsteps of Bold Miners all those years before, was Jaguar (Coventry).

Just days after the event, initial murmurings became claxon sirens signalling a complete financial meltdown, as the news filtered out that the company had been placed in administration. 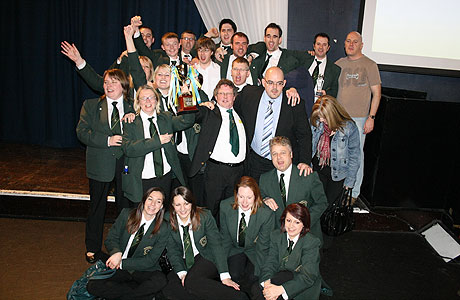 The last winners: Marsden Silver in 2010

Promises were made that bands (and volunteer organisers) would receive their prize money and expenses, but it soon became apparent that they didn’t have a hope in hell.

Classed as unsecured debts, any post dated cheques (that would have been issued 14 days after the contest) were worthless.

A rather weasely letter written on 5th January 2011 by Cliff Sandell, General Manager of the Prestatyn Sands Holiday Park (who just a few months earlier had thanked everyone for their support and expressed his hope that he would ‘see you at Prestatyn Sands again in the future’) chiselled the epitaph onto the headstone that marked the buried corpse of a once proud contest that died bankrupt and shamed.

In it he wrote: ‘In view of the present circumstances we do not currently propose to ask bands to commit to an event in 2011.’

And with that the Pontin's Brass Band Championship was no more. No wonder it is no longer fondly remembered.