4BR Editor Iwan Fox wonders if the Romans and the Mortimers got it right after all when it came to providing the masses with entertainment. 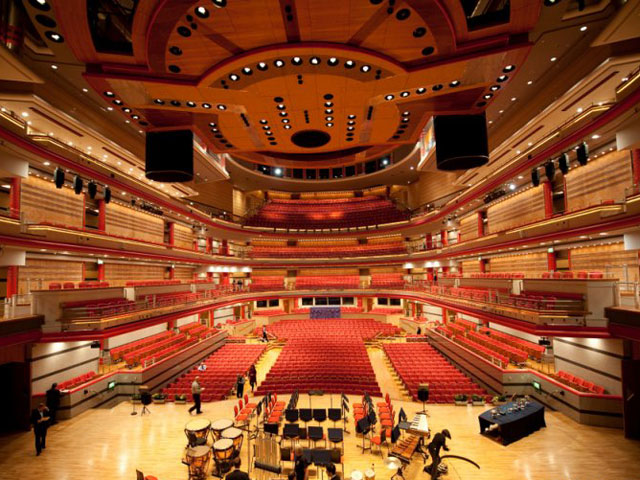 There was certainly something in the Roman poet Juvenal’s Latin metaphor ‘panem et circenses’ that rang true about the 161st British Open Championship:

A vividly exciting contest certainly kept the masses happy with its bread and circus entertainment at the most imposing brass band amphitheatre in the world.

The stunning battle for glory between the Welsh gladiatorial heavyweights of Tredegar and Cory also caught the imagination of the biggest audience seen at the event since its move to Symphony Hall, but it was the organisers of this riveting spectacle that wore the broadest smiles of contentment at its conclusion. 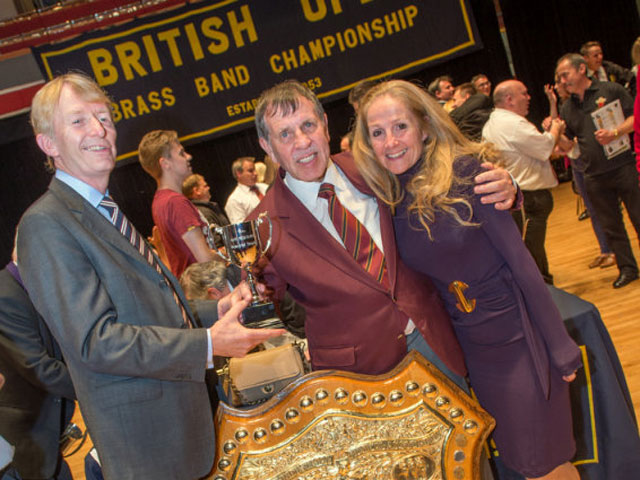 'Arabian Nights' was also a triumph for the Mortimers

It was a very personal triumph for Martin and Karyn Mortimer. The only opportunity they missed out on was getting the whole thing jointly sponsored by Mother’s Pride and PT Barnum.

Their decision to use Stephen Roberts’s ‘Arabian Nights’ was a difficult one: Edward Gregson’s ‘Symphony in Two Movements’ was initially considered, but the possibility it wouldn’t capture the enthusiasm of contest goers who had not particularly enjoyed ‘Electra’ in 2012, meant it was bypassed for more ‘audience friendly’ fayre.

It proved an inspired decision that fulfilled the specific criteria asked of it; a test piece designed to keep the punters happy – because without them, as Edward Gibbon’s would attest, even the British Open Empire is not immune to terminal decline and fall.

As a result, it helped make it a ‘must go’ event, especially for the hard to please contest fan – the plebeian masses who ever since 1853 have put their hands deep in their pockets to keep the grandest of all contests alive. 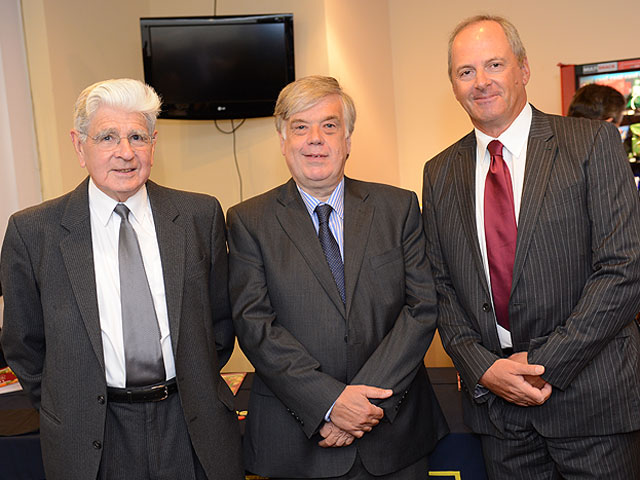 The ‘intellectual’ musical critics could still argue that in their opinion the over-baked dough mix of ‘Arabian Nights’ could well have been adjudicated upon by Paul Hollywood and Mary Berry, let along David Read, Rob Wiffin and the composer himself, but they still would have missed the point.

It was easy to sneer at ‘Arabian Nights’ as a piece of music – but as a wham bang top drawer brass band set work it took some beating.

And that is what Stephen Roberts deliberately set out to write. 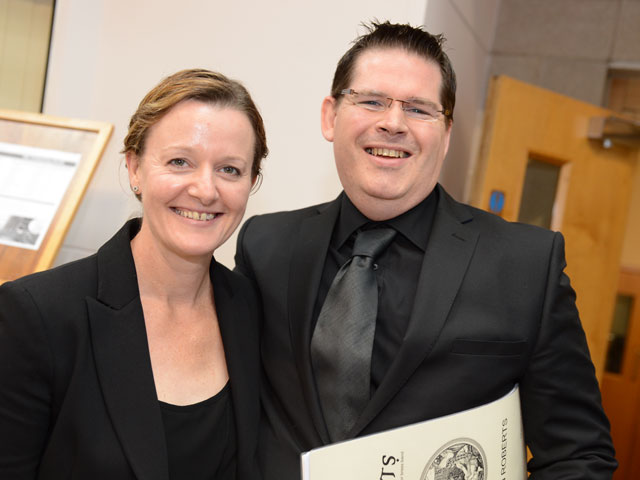 Crucially, the players (and the vast majority of conductors) also seemed very happy with the test piece they had to overcome.

The solo cadenzas and lead lines were demanding but not impossible, whilst the stamina sapping ensemble work was comprehensive and engaging.

You also suspected the MDs rather enjoyed the opportunity to revel in lyrical music making – although some revealed misplaced side’s to their romantic natures that would have raised the odd eyebrow in a house party thrown by Caligula.

There was even a whiff of great empire days past in the air: Not quite the Vandals at the gates of Rome at the beginning of the contest, but certainly enough eager supporters at the doors to delay the start by 15 minutes.

Once inside they stayed a while too; even ‘cup of tea bands’ taking to the stage to be faced with many more filled than unfilled auditorium seats. 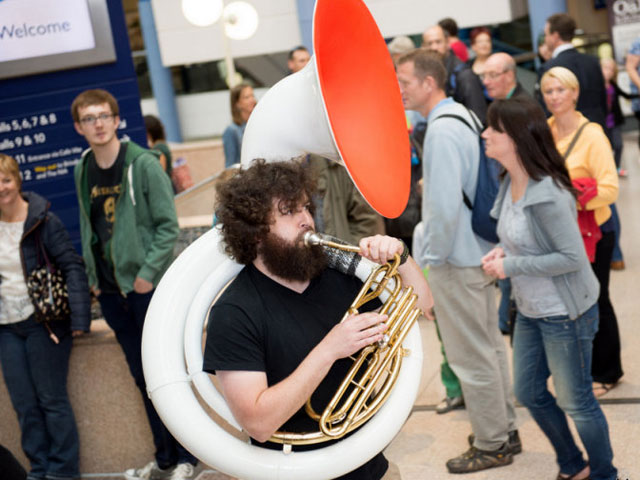 Entertainment for the masses indoors and out

Their efforts were warmly appreciated by an audience that readily understood the technical as well as musical challenges of a work bursting with familiar, recognisable themes  – especially when delivered by fearless young soloists who showed that not all the best playing talent had been ‘imported’ thanks to the relaxed registration rules.

There were still a few grumbles about ‘guest’ appearances, but the reality was that the bands just about entered into the spirit of the occasion and didn’t fill their ranks with personnel from exotic lands – although there were a few Danes, Belgians, Dutch and even domesticated Scots seen in rival’s uniforms. 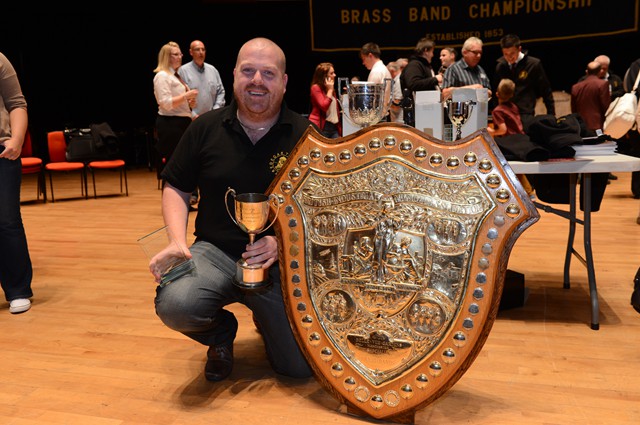 The old Roman trick of making foreigners citizens of the Eternal City (even if it was only for a day) seemed to work, even if it does need to be policed very carefully in future.

No wonder contest controller Frank Hodges (whose team did a fine job all day) wore a well deserved smile on his face – his bold registration decision having found favour with just about everyone involved. 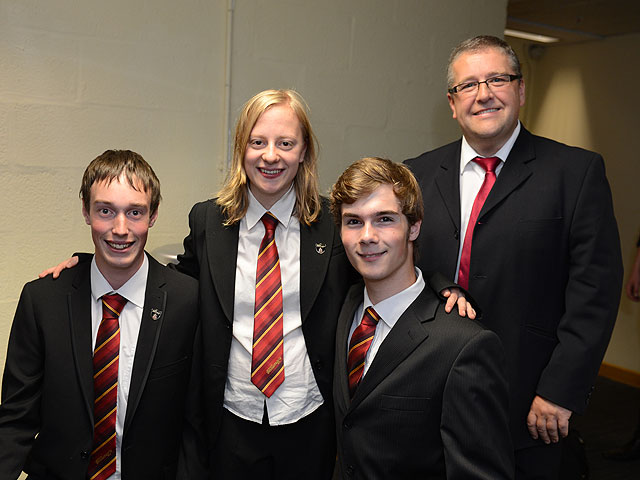 The homegrown talent of Beaumaris

That said, it was no coincidence that both Tredegar and Cory were made up of settled, long established personnel – with the winner’s still having 18 of the players in their ranks from their 2010 victory.

Although it was not announced, David Read MBE also made his last appearance in the box to give the empirical thumbs up (or down) to performances.

His pre-result remarks alongside his fellow judges made it perfectly clear why and how they reached their decision.

It was also one that, much like the vast majority of those he has been involved in over the years, has broached little argument.  It is hoped his expertise can be put to other beneficial uses at the Open and Spring Festival events for many more years to come. 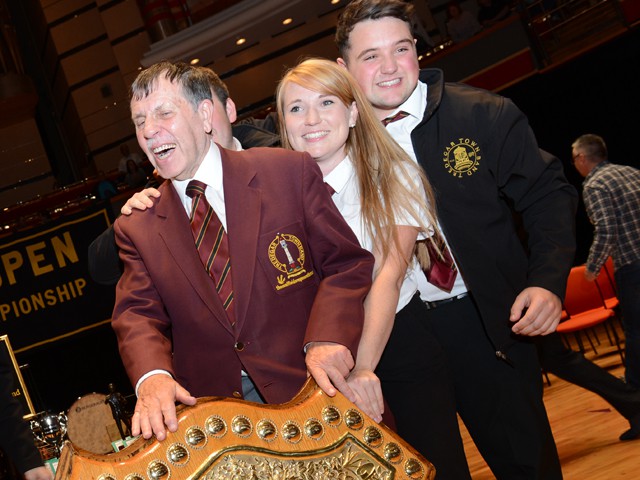 A final reminder of great days past came after Tredegar’s trio of young stars picked up the individual awards on offer, as the Roy Newsome Memorial Award was presented to the winning Band Secretary.

When at Black Dyke, Dr Newsome combined the role of resident conductor with that of all encompassing administrative factotum, whilst he also played a huge part in getting Tredegar to the British Open in the first place, rehearsing the band the night before their first Grand Shield win in 1976.

It was somehow fitting therefore that the award was presented to Tredegar’s long serving secretary Alwyn Powell.

Bread and circuses it may have been, but the 161st British Open was also a truly memorable occasion that will live on in the memory for those who packed into the great contesting coliseum on the weekend.

What did the Romans do for us eh?