4BR Editor Iwan Fox enjoys a day out in the sun at one of the most picturesque brass band festivals in th world. 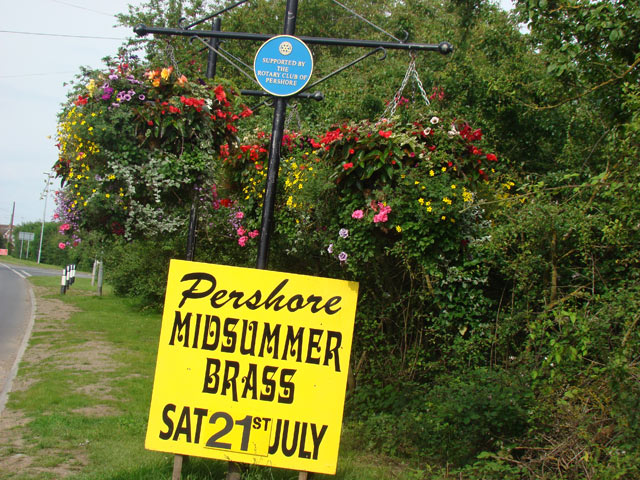 Tucked along the banks of the free flowing River Avon, the Worcestershire market town of Pershore provides one of the most picturesque concert festivals in the banding world.

And with a long awaited glowing orb of sunshine blazing down warming rays from a clear blue sky, it was little wonder that the streets, with their mix of Georgian town houses and well heeled restaurants leading to the quartet of concert venues were packed with a colourful mix of day time shoppers, weekend sight seers and a host of perspiring performers from the 27 participating bands.

12 hours of nonstop music making at the historic Pershore Abbey, the local Baptist Church, outside the main supermarket and at the back of the one of the best pubs, provided wonderful entertainment for visitors too. 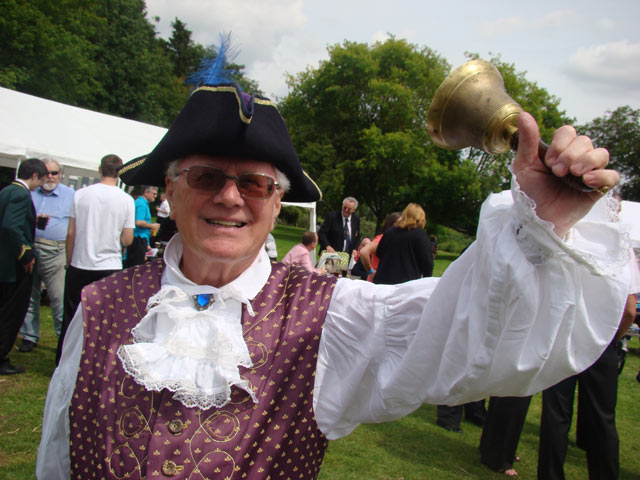 Making sure everyone hears what goes on with the town crier...

Expertly organised, with each of the bands taking it in turn to move from one concert stage to another, there was something for everyone to enjoy, with performances from Butlins Champion Flowers and Scottish Open title holders Tongwynlais Temperance interspersed with sets from local and youth bands, Cheltenham finalists and non competitive ensembles.

It all began just after 10.00am with the fanfares from the top of Pershore Abbey Tower heralding the start of the day long entertainment. 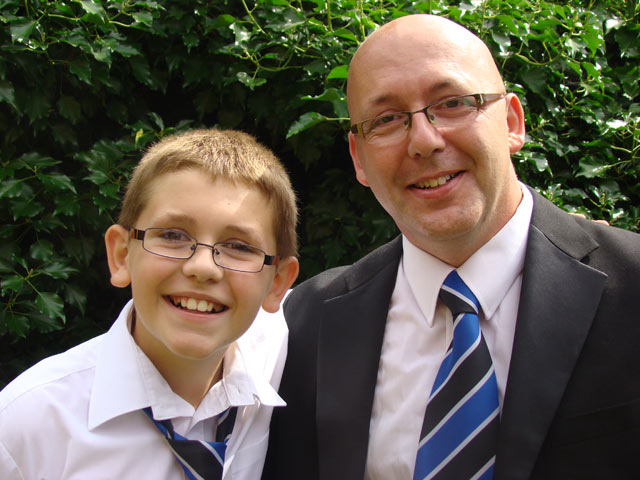 The Abbey, with its beautiful vaulted roof, Gothic arches and lively acoustic, hosted 16 performances amid its cooling Anglican air - starting with Hook Norton Brass and finishing with Jaguar Land Rover under the baton of Dave Lea.

Dave has been a regular visitor to the revitalised event in the past few years. “It’s one of the best brass band festivals anywhere,” he said.

“On a day like today there is a great atmosphere, the bands help each other out and the music making is relaxed and enjoyable.

A bit of sunshine and good brass band music puts a smile on everyone’s face.”

That was certainly the case at the back of the Angel Inn, where a large marquee had been erected to host the performers, whilst the River Avon bubbled away in the background, and the beer bubbled its way into the pint glasses of a packed crowd.

Easy listening programmes were well received with some cracking sets from the bands – with Cleobury Mortimer Concert starting the proceedings in the morning and Lydbrook rounding things off just in time for a last pint before stop tap. 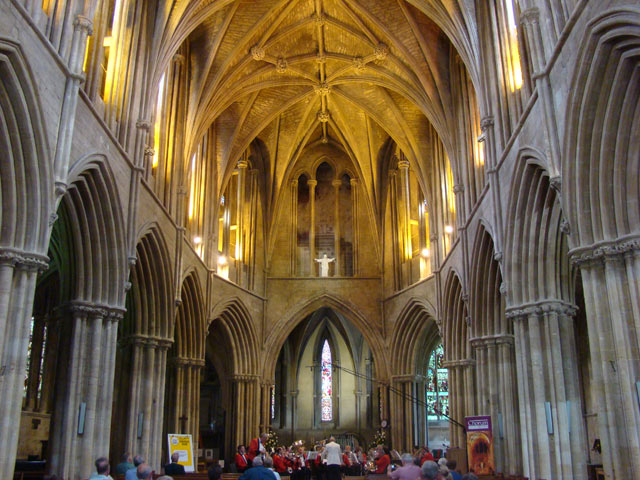 Cooling Anglican air at the Abbey

The glue that held things all together though came from the band of hard working organisers, as they sold programmes, directed players, carried equipment and answered a hundred questions or more from puzzled shoppers to thirsty bandsmen – all accompanied by a welcoming smile and a cleverly placed entry wristband.

One of the team told 4BR: “It’s become such a popular event in the town because we are not trying to sell anything ourselves – just trying to attract more people to come here.

The shopkeepers and pubs get more passing trade and people get great free entertainment. Add a bit of sunshine and there’s no place better to be if you like brass bands.” 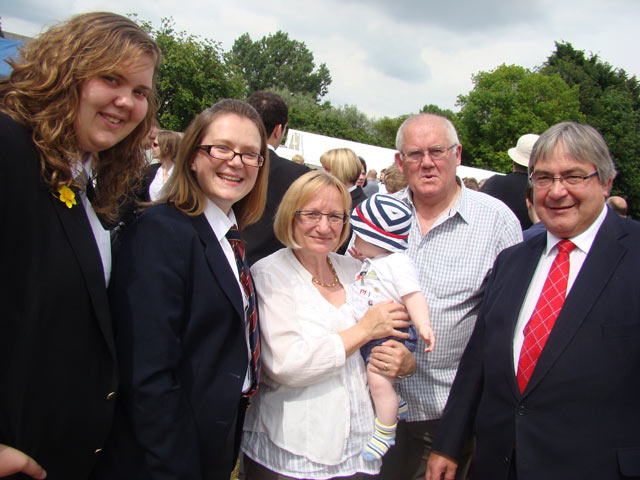 Great day out for the extended Childs family

As the likes of City of Coventry, Staffordshire, Arrow Valley, Shirley and Sovereign Brass amongst others kept the crowds happy in the sun, over in the lovely Pershore Baptist Church there was some equally enjoyable music making on show from other bands too.

Almost hidden away off the main town square, the church offered a compact venue, just big enough to enjoy a fire and brimstone preacher or one of the dozen bands that provided some cracking performances, with the talented youngsters of Lydney Training and the joint forces of West Mercia Police Youth and Polysteel Youth two of the real highlights of the day. 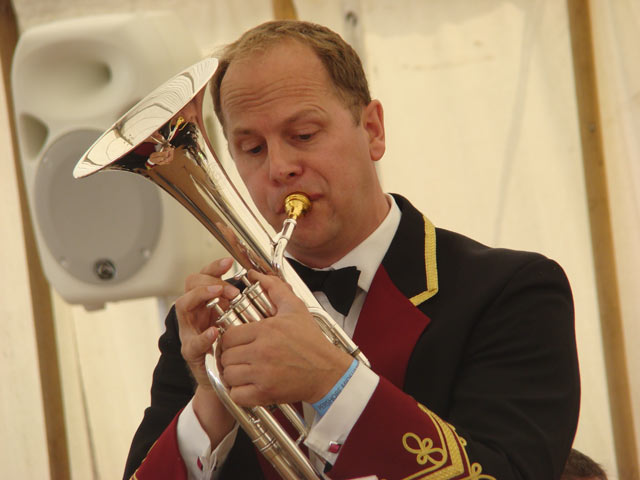 Meanwhile, at the Chapman Court venue, in front of the main ASDA supermarket, the afternoon shoppers with their bags bulging with goodies were very well catered for with ‘a little extra help’ as eight bands from Shipston Town to Malvern Case Brass provided 35 minute programmes just outside the doors.

Back at the Angel Inn, the likes of Bilton Silver, Flowers and Tongwynlais upped the ante with slickly played programmes, with little sign of audience fatigue as the amber nectar, wine and soft drinks flowed down the throats of well satisfied listeners as persuasively as the nearby River Avon flowed towards the mouth of the Severn Estuary. 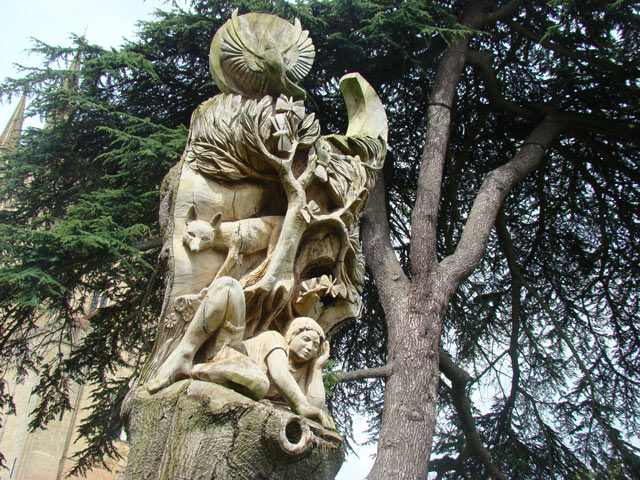 There's a fox in there somewhere...

A balmy evening saw the entertainment carry on without stopping, with Jaguar Land Rover providing a tasteful musical climax at the Abbey and Lydbrook joyfully entertaining the hardy sunburnt folk at the Angel Inn.

It rounded off a wonderful day of music making at a Festival that continues to thrive thanks to brilliant organisation, a welcoming atmosphere and bands that provide great listener friendly  entertainment.