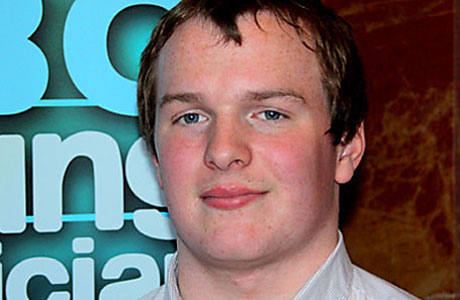 Malcolm Wood: At the age of 17 you've crammed a great deal into what has been a short musical career.

Do you have to pinch yourself at how things have evolved?

Jonathan Bates: It certainly keeps me on the edge!

I’ve always got something to be working on, whether composing or performing. I guess the rate at which my composing career has developed just over the first few months of this year has been pleasantly surprising.

I didn't really have a great output before 2012, but so far this year I’ve managed to win the Flowers Band Composing Competition and had the premiere of ‘Tortuguero 6’ at the RNCM Festival.

There are a number of new commissions for solo works to be recorded on CD's throughout this year – and of course the National Finals test piece.

Malcolm Wood: You have just finished your studies at Leeds College of Music. When did you start to compose and where did the interest come from?

Jonathan Bates: I started off just playing around on Sibelius Student which my parents got me for Christmas about 4 years ago, but it was only when I got into my GCSE Music studies that I was able to expand further into trying out full band scores etc.

Strangely, especially for someone aged 10, my original interest in composition came from hearing really descriptive brass band works such as the ‘Gaia Symphony’ and ‘Red Earth’, as well as general pop songs from that time.

I'd then sit during car journeys combining the ideas in my head to see how they sounded, but wanted to be able to remember the ideas to develop on the next trip wherever we went.

Malcolm Wood: Do you have any mentors who you can talk to about your pieces and advise you – and who inspires you as a composer?

Jonathan Bates: I've been so lucky to have worked alongside Philip Wilby, Bramwell Tovey and Edward Gregson on aspects of my compositions.

The techniques and ideas I’ve learnt in such a short space of time from them have proved invaluable.

As far as inspiration goes, I enjoy listening to Ravel and Debussy, and a lot of their techniques are ideas I like to try to incorporate in my music.

Malcolm Wood: You composed ‘Within the Paths of Righteousness’ which was premiered by the National Youth Brass Band of Great Britain conducted by Bramwell Tovey.

What was the inspiration behind the piece?

Jonathan Bates: It really stemmed from a few serialist techniques I had been taught one afternoon at school.

I was testing out the concept of a tone row, and the various inversions that go with it. So I used the 'tone-row' as the tune to ‘Crimond’ and the whole piece is based on that melody, either backwards, upside down, or backwards and upside down.

I also tried to incorporate the words of the hymn into the setting of the rows, so the final reprise is triumphant and glorious – much like the words found in the final verse. It really became a very elaborate GCSE composition!!

Malcolm Wood: You have been asked to write the test piece for the Fourth Section National Finals in Cheltenham this year. Tell us more about ‘A British Isles Suite’ and how the composition came about?

Jonathan Bates: I started work on it after a short break to the Isle of Man in 2010. Seeing how tradition and culture played a major cultural role there I thought I’d write a piece reflecting this in general.

Having tried a few ideas out, I decided to look into both the poetic and musical traditions of the British Isles.

The piece incorporates both elements: For example, the opening movement, Scotland uses stereotypical Scottish rhythms, and a 'bagpipe-esque' drone under the cadenzas.

The second movement, Wales, is composed with reference to the given poetic quote, rather than any direct musical comparison.

I try to make sure every aspect of the brass band is tested: rhythm, technique, musicality, stamina, style, interpretation etc.

It’s all in there and every player has something to contribute towards this.

Malcolm Wood: Did you find composing the piece came easily to you, or were there many sleepless nights trying to link various sections?

Jonathan Bates: When it comes to putting pen to paper, I’m pretty weird I think!

I'm never able to write a set amount of bars, then come back to it the day after and write another set number of bars.

Either I’ll be able to write minute upon minute in one night, keeping the neighbours up until the early hours testing ideas out on my keyboard, or I simply won't be able to write anything for days, even weeks.

It probably took me the best part of 3 months to complete ‘A British Isles Suite’, but the time actually spent writing would probably be no more than a week or two!

Malcolm Wood: What advice would you have for the competing bands as they work on the piece for the final on Saturday 22nd September?

Jonathan Bates: The main thing is to enjoy it!

I've tried to ensure that both the players and audience will be kept entertained!

All I can say is try to get into the right spirit of each movement.

Malcolm Wood: Are there any other compositions in the pipeline?

Jonathan Bates: I've got a few projects lined up over the summer.

I'm looking forward to working with Nick Etheridge and Virtuosi GUS Band later in the year on my new mini tuba concerto, ‘Diversity’.

I’m in the process of writing a new cornet solo for Jim Hayes, and a trombone solo with piano for Brett Baker.

I've also come across a number of great pieces on YouTube to arrange for band so I will be working on these over the next few months too.

Malcolm Wood: Unfortunately our five minutes is up – so thanks for talking to 4BR and we look forward to hearing your test piece in Cheltenham later in the year.