4BR's Malcolm Wood looks back at a Senior Cup contest where the best bands were led by MDs who brought traditional virtues to the fore. 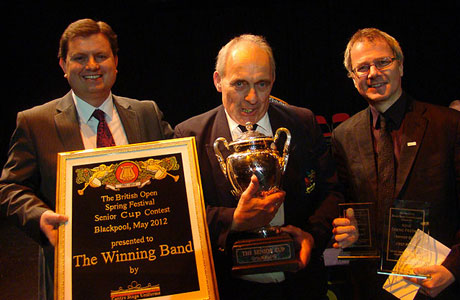 Looking towards a grand future for 2012 winner Northop

There were certainly a few eyebrows raised when it was announced that Martin Ellerby's 'Elgar Variations' was to be used for the second time in four years at the Senior Cup.

However, not for the first time since it was originally heard as the set work at the European Championship in Birmingham in 2007, it provided an engaging test of technical skill and intuitive musicianship for the competitors in an acoustic that rewarded warmly balanced, sensitive execution.

The Pavilion Theatre provides a compact space (the bands performed on the floor and not the cramped stage), although with its 70 foot plus ceiling height, it still catches out MDs who want their ensembles to pump out the volume.

It’s a bit livelier than you may imagine, so the positioning of the box towards the back of the hall, under the overhang of the first tier meant that misplaced dynamic enthusiasm invariably caused those who wished to impress by volume alone to come a cropper.

The adjudication team of Paul Andrews and David Red MBE spoke of the need to project the middle ensemble balances and timbres in a score that utilised the central core of the traditional brass band sound palette; with subtle shading in the horns and baritones, warmth in lower brass lines, and cultured dynamic variance (the first fortissimo is almost 100 bars in).

When it came to their results the duo were the epitome of consistency – much like the quartet of intelligently managed accounts from Northop, Aldbourne, Hammonds Saltaire and Co-operative Funeralcare North West which claimed the quartet of  qualification places on offer. 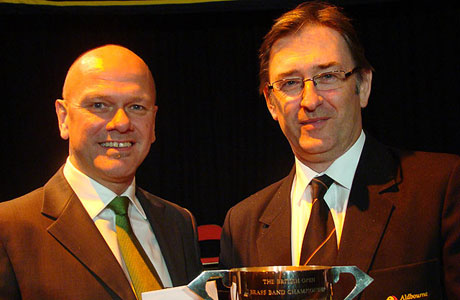 Each of them was a well prepared example of just what the judges were looking for – although to be fair, David and Paul had a much more difficult job on their hands with the number of evenly matched renditions that came their way to fill the midfield places over the seven hours they spent in the box.

Those who managed to bring an added degree of well defined clarity out of the detailed score, without reverting to ‘any old thing’, as the composer succinctly put it in his programme notes, caught the judge’s ears.

Those who didn’t, ended up anywhere between 9th and 16th: Those who couldn’t in the opinion of the judges, ended up being relegated.,

As a result, there were very few complaints about the results, although a few bands may have counted themselves a little unlucky.

Northop Silver’s stylish rendition under Thomas Wyss took the title with a performance that was certainly built on a warmly balanced ensemble, secure soloists and that all important appreciation of the hall’s acoustic.

The leading lines (in particular Aled Williams on euphonium, who was still in hospital less than eight hours before the contest began) were crafted with just the right amount of liberal understanding of tasteful rubato, whilst the MD kept the tightest of reins on tempo and dynamic – ensuring that that the final sections built towards an appropriately charged climax.

They will be a band to fear in the Grand Shield. 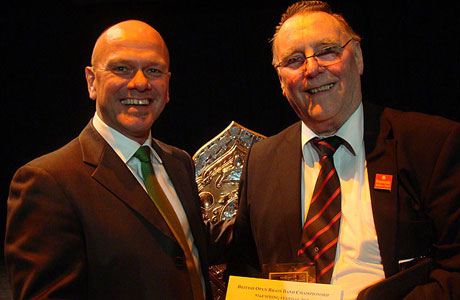 So too the ever improving 2011 Senior Trophy winner Aldbourne.

They continued to show that they have yet to reach their full potential under David Jonson’s free flowing musicality with a performance that fully deserved its podium finish.

A refined Elgarian style coupled with solid no nonsense execution was the key to their success, helped by a wonderfully composed individual contribution from ‘Best Instrumentalist’ winner Richard Hughes on principal cornet.

Meanwhile, Hammonds Saltaire’s lighted hued rendition under MD Morgan Griffiths certainly gave the judges something to ponder as they went to their comfort break at the midway point of the contest.

The Yorkshire band delivered a performance of delicacy and control that claimed its qualification to the Grand Shield in authoritative, cultured fashion.

The final qualification place went to Co-operative Funeralcare North West after they delivered a vibrant account under Jef Sparkes that bubbled with well defined ensemble clarity.

Although certainly not cut from the same musical cloth as the bands that finished above them, it always kept the listener engaged and interested.

A well planned approach by the MD came off in spades on the day.

Ratby Co-operative’s disappointment at just missing out will have been balanced by the way in which Mike Fowles raised their level of contest performance up to the coat tails of Grand Shield qualification standard, whilst Simon Stonehouse did much the same for an ever improving Aston under Lyne.

In contrast, there will have been disappointment for the two fancied runners of Felling and EYMS, who ended up in a neck and neck battle in seventh and eighth – neither quite suggesting that they done enough to really present a definitive case for qualification, although a top six finish for both was almost within their each. 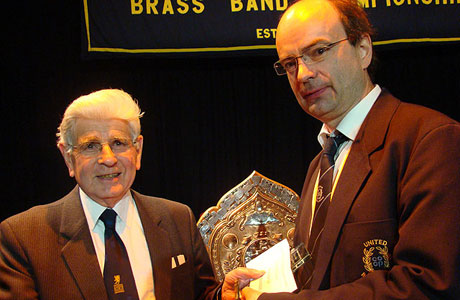 Behind them, the midfield finishers all delivered the type of performances that showcased both their strengths and weaknesses; none quite secure enough in overall consistent ensemble and solo execution to really push further up the results table than they eventually did.

There was much to enjoy with some interesting interpretations (openly encouraged by the composer), although some did border on the saccharin coated diabetic coma inducing variety at times.

The well placed allusions to Elgar, as Ellerby described things, were more like misplaced illusions on occasions, and would have caused Paul and David a great deal of thought provoking comparison in the box.

In terms of execution there was little to choose between Derwent in 9th and Bo’ness & Carriden in 16th – although the musical approach was much more pronounced.

Unison Kinneil, Friary Guildford, Laganvale and Dalmelligton will all have headed home cursing their luck on a day when it just wasn't meant to be after delivering performances that found little sympathy in the box.

The difference between the fall through the trap door and relative midfield safety though was very small.

In contrast Northop, Aldbourne, Hammonds and Co-operative Funeralcare are one step closer to Symphony Hall. Four well directed bands can now look forward to a return trip here next year if they can build on this classy musical form.