A contest winning behemoth may have been created in Rotterdam — and it will take more than burning torches and pitchforks to stop it now... 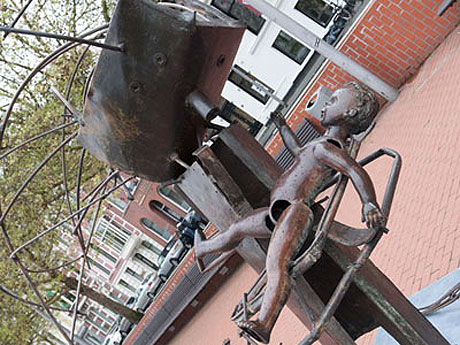 There was no ferocious lightening storm crashing overhead, and none of the lights in the De Doelen Hall flickered manically as the life giving electricity was sucked from the filaments of their bulbs.

But make no mistake about it; a behemoth was brought to life in Rotterdam by an obsessively ambitious doctor.

The European championship was the culmination of a recreation process that has involved the transplanting of a dozen or so new parts bolted into the Queensbury body politic.

It has been undertaken with such surgical precision and intuitive attention to anatomical banding detail that it is now hard to find a single cosmetic blemish.

The end result, after 12 years of varied experimentation, is that Black Dyke is now the almost perfect contest winning creation; one that is indisputably the very image of its master, Dr Nicholas Childs.

The iconic Milton Stevens trophy now resides in the famous Yorkshire bandroom – a totemic reminder of the intoxicating mix of desire, ambition and sheer ruthlessness the MD and his band continues to display in the pursuit of glory. 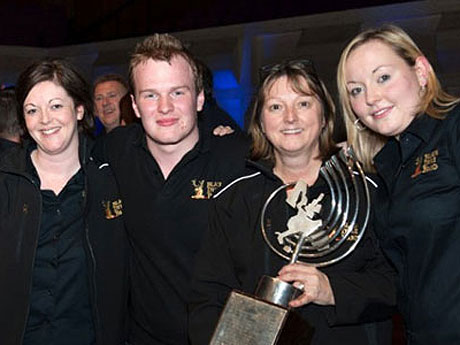 Changes have been made to claim the trophy for Dyke

It got there in the most memorable of fashions on a weekend that produced music making of astonishing excellence.

It brought the very best out of the leading contenders, with Black Dyke’s construct of the rarest melodic beauty taking a two point margin into Saturday ahead of rivals Cory and the Nordic giants of Eikanger and Manger.

The slow burning Benelux challenge of Limburgse and Schoonhoven followed in fifth and sixth, with Co-operative Funeralcare leading the pack of high class rivals hanging onto the coat tails in seventh.

It inspired the MDs to draw deep into the well of their musical hearts; Peter Sebastian Szilvay and Ivan Meylemens in particular creating a sense of melancholic emotional loss that brought tears to the eyes of many in the hall with Manger and Limburgse.

It also brought the very best out of the Dyke and Cory sibling conductors too, as they moulded cultured readings based around central cores of velvet middle band timbres that gave their interpretations a more considered, less intense sense of emotional style. 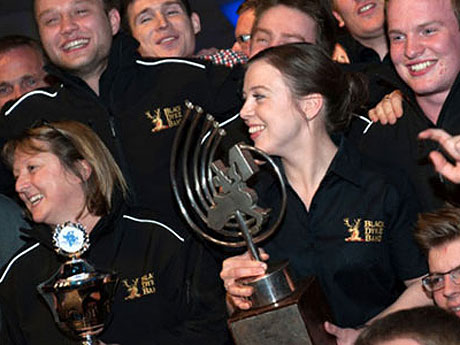 Looking the right way for the new champions

Black Dyke’s performance in particular was as good as any that has been heard under their conductor’s tenure. It was exceptional music making.

It was also the approach that ultimately found favour in a box which contained Andrew Berryman, Frans Violet and Arsene Duc – although their decision must surely have been made on artistic preference rather than technical merit, such was the overall standard of playing on show.

As the audience drifted into the Rotterdam night, the talk in the nearby bars was of the musicality that had been shown by each of the performers, with the same arguments as those found in the box played out over pints and pizzas well into the small hours.

In contrast, 24 hours later, a hendecagon own choice sledgehammer left everyone in the De Doelen hall as emotionally spent husks: The draw ensured that. 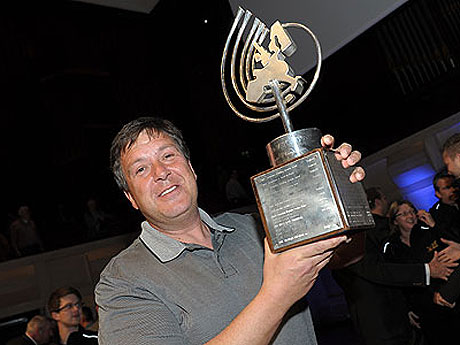 The creator and his prize: Dr Nicholas Childs with the European Trophy

This was like being in the centre of the famous Tommy Hearns versus Marvin Hagler boxing match – when the protagonists, hyped and honed to adrenaline fuelled perfection went out and hit the holy crap out of each other until only one was left standing to be crowned champion.

However, on this occasion the contest went 11 rounds with the bruisers’ hell bent in pummelling their opponents straight into the ground.

It provided those lucky enough to be ringside with one of the truly great brass band contests of all time: It was stonkingly mesmeric stuff.

When the final bell rang, listeners were wiping the blood, sweat and guts that had been sprayed from the stage in pursuit of glory off their seats at the back of the vast 2000 seater hall. 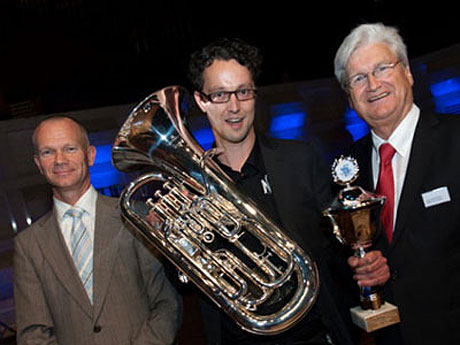 First Cory delivered a ferocious ‘Spiriti’ packed with such emotional dynamite it almost shattered your spine.

It sent the audience into a collective spasm of adulation that took 10 minutes to find its resting pulse rate again. The band left the stage having given their all, the MD in a state of near collapse.

With the audience still recovering its senses, Black Dyke set about delivering a ‘Revelation’ of such single minded purposefulness that even the choreographed stage bows seemed a part of the performance experience.

Now the crowd went completely bonkers. The MD must have known the title was within touching distance.

Despite the shock waves still reverberating around the hall, Peter Sebastian Szilvay then raced onto the stage to pummel the senses into orgiastic oblivion.

The potency of Manger’s sensational ‘Audivi Media Nocte’, was distilled with such electrifying intensity that it almost boiled the blood in your veins. It was close to being an illegal substance.

At its close the reception bordered on mass hysteria. People were stunned with slack jawed incomprehension: Nothing had prepared anyone for this.  Brains were turned to scrambled egg.

That took some spiking – and some explanation. 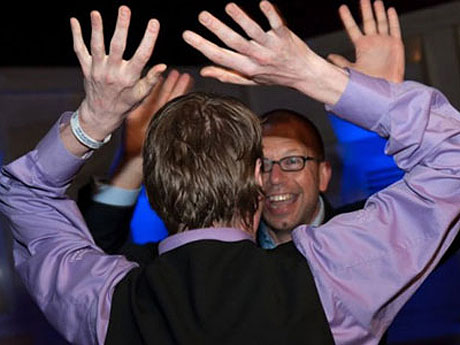 Give me five for third: Schoonhoven celebrate their third placed finish

What eventually transpired seemed to back up the belief that it was perhaps the pieces rather than the playing that came under the most severe scrutiny. If that is now the case, EBBA needs to change things fast.

Instead, the trio opted for Schoonhoven’s lower wattage ‘Audivi’, played with vibrancy and passion, but with about 20,000 less volts of musical electricity.

That it gained 99 points to top the own choice discipline almost defied reality – not that it bothered the locals, who were now cheering as if high quality ganja was being pumped into the auditorium through the air conditioning.

Less contentious though was the second place of Limburgse after they delivered a simply delicious ‘Old Licks Bluesed Up’ under the genius of Ivan Meylemans that featured a bass trombonist in Erwin Kelchtermans who had a depth of sound not even Paul Robeson could match. The whole thing was a musical masterclass. 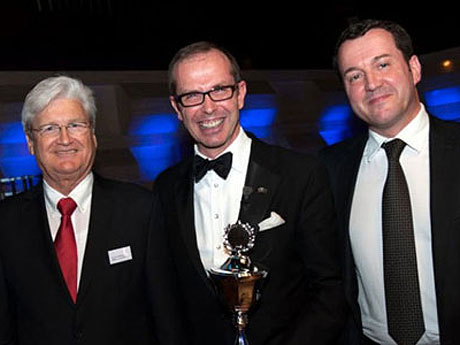 In other contests they would have been close to topping the pile.

Eikanger’s engaging, but fragile, ‘From Ancient Times’ rather summed up their curious weekend under David King, whilst there was much to enjoy in the lovely musical approach of Nord Pas-de-Calais on ‘Spiriti’, Lyngby Taarbaek’s fizzy ‘Vienna Nights’ and Oberosterreich’s revelatory treatment of, ‘Within Blue Empires’.

There was still enough emotional adrenaline running through the veins to instil an intake of breath that could have inhaled a spliff the size of a submarine when Cory’s name was announced in fifth. 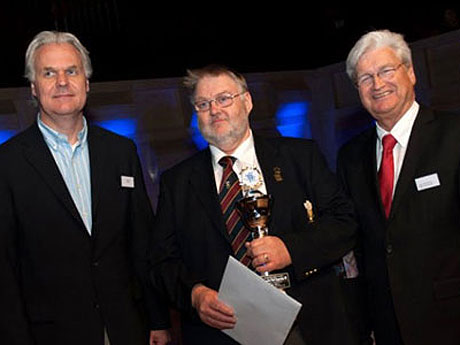 No fairytale finish for Cory in fifth

Eikanger’s fourth was the best they could expect, whilst the announcement of Schoonhoven and Limburgse in the podium placings was met with scenes of frenzied celebration both by players, organises and audience alike that was a mix of undiluted joy and unconcealed surprise.

With the announcement of the new 2012 champion, Manger’s scintillating defence of their title came to an end amid the cacophony of overjoyed Black Dyke players racing to the stage to celebrate the defining moment of their 21st century history, with the man who had created it – Dr Nicholas Childs.

This could well be the moment when his Black Dyke comes of record breaking age.

He has created a contest winning monster that will take more than burning torches and pitchforks to stop now.