The Welsh love a bit of fire and brimstone biblical story telling. This isn't it then... 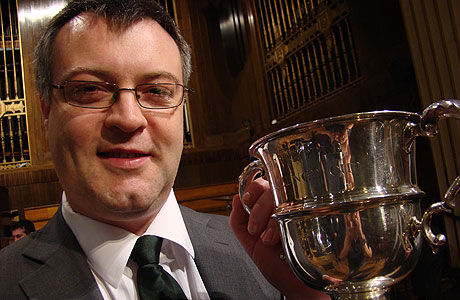 Can Llwydcoed retain its title this year?

The Welsh love a good bit of non conformist religion to bring the best out of them.

Those brought up in the Sunday School tradition will know a good fire and brimstone story when they hear one - although the Biblical ‘Three Kings’ were not Barry John, Phil Bennett and Gareth Edwards.

That said, the Welsh have also fallen out of love with all things chapel over the last couple of decades, so it may be about time their reacquainted themselves with a stiff musical cross or two.

However, as well crafted as Goff Richards’s ‘Cross Patonce’ is, this particular test piece may not be the calling card for all things great and glorious that these bands may have hoped to have had to play this year to get to Cheltenham.

It has been nailing up contest winning aspirations around the country quicker than a ‘Buy One Get One Free’ crucifixion sale in ancient Judea.

Technically it has proven to be very difficult for bands – from the treacherous opening euphonium cadenza and lyrical sweetness of the central interlude, to the lightweight, breezy joyfulness of the finale. Not many bands have been able to play it – and play it well.

Hopefully that will change on Saturday as a strong set of contenders seek to head to Cheltenham where Wales has a remarkable recent record to maintain.

Despite last year’s qualifiers coming 7th & 15th, the nation can still boast four successive wins up to 2011, whilst last year was the first time in five that at least one band hasn’t ended in the podium places.

Plenty to aim for then if they can catch the ear of Steve Sykes (right) in the box.

The list of contenders is headed by Blaenavon Town, who last qualified in 2008.

5th last year, they are making solid progress under Andrew Protherough-Jones, coming 5th at the Welsh Miner’s Entertainment contest and 3rd in the First Section at their home town event  late last year.

Meanwhile, Goodwick Brass will be looking to make it a hat-trick of Area wins after retaining the Third Section last year.

Matthew Jenkins has a wonderful bunch of maturing youngsters under his command, who continue to make remarkable progress.

They were unlucky not to have claimed the National title in Cheltenham where they posted their second successive podium finish, whilst they also won the Blaenavon contest in some style late last year.

This may be another step up in class, but you suspect they will be well prepared and determined to add another title to their CV.

Colin Hogg will direct the well prepared assault of Gwaun-Cae-Gurwen, as ‘GCG’ as they are universally known look to claim their first qualification finish in living memory.

Nobody quite knows when they last appeared at the National Finals, so a return is long overdue for a hard working band that showed good form in coming 6th at the Welsh Miners Entertainment contest and in claiming a podium finish at Blaenavon.

The talented Paul Hughes brings the solid looking Llanrug down from North Wales as they seek to build on last year’s encouraging 4th place finish.

They will come in decent shape too with a good win in the Second Section at the North Wales BBA contest late last year.

Second Section Welsh League champion Llwydcoed should be one of the short priced favourites to return to Cheltenham after winning this title last year and going on to come 7th at the Finals.

Gary Davies has a very strong band under his wing that will fancy their chances on this piece.

The winners of the Second Section at Blaenavon should be in the mix if they play to form once more.

The purposeful Mid Wales challenge will come from Newtown Silver, as Steve Edwards continues to build a very capable contesting outfit under his baton.

6th last year was an encouraging return for a rebuilding band, so perhaps a bit more is expected this time out after coming 2nd in the Second Section at the North Wales BBA contest.

Alan Bourne continues to do a cracking job at RAF St Athan, especially at a time when the air force base is under threat.

They last qualified in 2005, but with encouraging performances at Blaenavon in the top section and at the Welsh Miners Entertainments contest where they came 3rd, they could well fancy their chances of returning this year.

So too Royal Buckley Town, as they look to claim a Finals place for the first time since 2009 and build on the fine performance they gave here last year in coming 3rd. They could be a bit of a dark horse once more.

An impressive runner up spot at the Miners Entertainment contest and 11th place at the National Finals indicates that they are once again on the up.

Two bands stick out this year for us in the increasingly impressive Goodwick and the very solid Llwydcoed. We think these two should be favourites to claim the qualification places although Llanrug could be a real threat.

Royal Buckley and Newtown should do well, with RAF St Athan filling the top six places. Our dark horse is Treherbert.