Peter Bale looks back at the First Section contest at Stevenage. 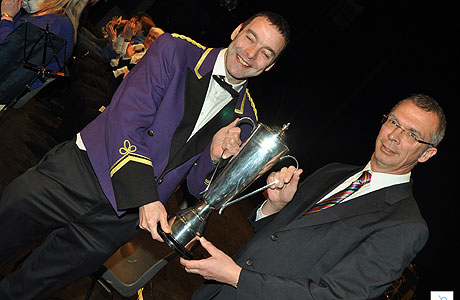 David Lancaster referred briefly to the controversy concerning the appropriateness of ‘Mountain Views’ as a First Section test: an enjoyable and effective piece, but possibly not the best preparation for bands aspiring to Championship status.

He felt that there were enough technical challenges, but that consistency was the key, with many performances being mixed, with excellent moments marred by uncomfortable passages.

He also questioned whether some of the conductors had been moonlighting as taxi drivers, with makings such as stringendo and maestoso being ignored.

Becontree Brass, playing 11th, was on a high following their win at Butlins, and produced the most consistent performance of the day, with a well-integrated sound.

A little untidiness in the fugue was not enough to damage their chances and they were worthy winners.

Milton Keynes Brass were a little tentative at the start but quite atmospheric.

Lines in the tutti passages were admirably clear, the solo cornet was impressive and there was a good range of dynamics, giving them the 2nd qualification place for Cheltenham.

Alder Valley Brass produced a subtle opening, with prominent tubular bells. It was a rhythmical reading with a good sense of shape, although a somewhat aggressive attack in the fugue section grated a little.

A well-deserved 3rd place was the reward.

Bedford Town's 4th place surprised us a little, as they suffered from insecure intonation and an apparent lack of confidence, although the performance did improve as it went on, with a positive close.

Kidlington Concert Brass seemed to play the opening without any horns, but there was much to admire in their performance, notably from trombones and percussion, with a smooth cornet solo and a bright finish, giving them 5th place.

City of Cambridge produced a good overall sound and shape to their 6th place performance.

Whether it was down to the visual element, the absence of a percussionist seemed more detrimental to us than it did to David in the box, and we were very aware of missing components and other insecurities as two players strove to cover the parts.

Ipswich & Norwich Co-op had intonation issues at the start, but a nice euphonium and a full sound in the tuttis.

The cornets turned out to the audience for their flutter-tonguing interjection quite effectively, and the cornet solo, played by the second man down, was well done. 7th place it was.

Cawston had the horns sitting on the left alongside sop and rep. They produced a full-blooded sound with a slight tendency towards stridency.

It wasn't a particularly subtle reading, and a mid-range 8th seemed right.

The darker sections were played with real menace, although there was a loss of flow in the middle section.

There was a dodgy moment when the first trombone's music stand nearly fell over, but it clearly impressed us more than David, placing them 9th (not that they would worry, as it was enough to secure their promotion to the Championship Section).

Jersey Premier Brass, playing last, was another band who we thought could have been placed higher, with a subtle opening, an aggressive storm and driving percussion and trombones.

Their cornet player won the solo prize, some consolation for 10th place.

Yiewsley & West Drayton (11th), Horsham Borough (12th), Soham Comrades (13th) and Chichester City (14th) all had their moments, but were inconsistent, although it must have been quite hard to separate them.

Bringing up the rear were Welwyn Garden City (15th) and Fairlop Brass (16th).

Both performances had their merits, but Welwyn became quite untidy in some of the quiet passages, and Fairlop were plagued by uncertainty and poor intonation at low dynamic levels.