A very special composer has left 16 bands with a very special piece of music to play this weekend if they are to reach Cheltenham. 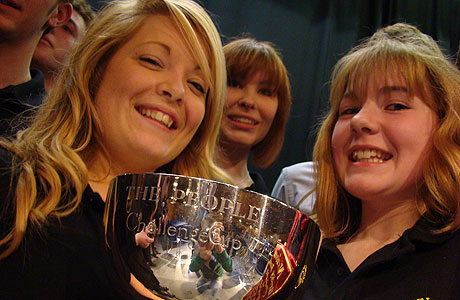 There should be an added significance to the Second Section contest on Sunday morning.

The death of Goff Richards robbed the region of one of its finest musicians, and a composer whose works brought a great deal of enjoyment to performers and listeners alike over the years.

‘Cross Patonce’ is one of his finest; a composition rich in evocative colours and timbres, beautifully phrases and a sheer joyfulness.

It perhaps deserved to be performed at a higher level than this, but we are sure the 16 competitors will try their very best to bring their own small musical tributes to the stage.

The contest promises much – and not just because of the music.

The standard of bands at this level is remarkable – with Brunel securing the Area’s third National title since 2005 with their superb victory at Cheltenham.

In addition, Pendennis also claimed a top six finish – the fourth out of the last six qualifiers to achieve the feat. It is a record to be very proud of – and one that other parts of country view with green eyed envy.

Tony Swainson and Chris Wormald (beow right) will surely enjoy their sojourn in the adjudicator’s box.

With Brunel Brass promoted to the First Section, Pendennis Brass Falmouth will be a short priced each way bet to make another return to Cheltenham, especially if Steve Thomas can get them to perform as they did at those National Finals, where they came 5th

However, the face a stern challenge from a host of rivals, with St Pinnock keen to add another title to their CV after their Torquay contest win late last season.

They posted their best result since gaining promotion in 2005 in coming 4th last year, so will be determined to push for a qualification place.

That Torquay contest saw no less than seven of this field up against each other, with City of Bristol claiming 4th place under Ceri Thomas.

They ended in 10th last year so will be looking to secure a top six finish for the third time in four years.

Soundhouse Brass returned to the Area line-up last year after missing out in 2010, and delivered solid accounts in coming 6th here and 5th at the Torquay contest, whilst the consistent Phoenix Brass (Crewkerne) will look to build on their Torquay outing and claim a top six finish after coming 7th for the third time in four years last time out.

Bath Spa will be directed by David Walker as they seek to build on an encouraging first year back.

They came 11th last year and ended in 13th at the Wessex contest, so they know they have some work to do.

Cinderford will look hope to claim a top six place after their third consecutive top ten finish last year, whilst it’s good to see Heyl Town return to the fold after missing out in 2011.

Charles Fleming leads Lympstone as they look to make an immediate impression following their relegation from the First Section.

They have just fallen away over the last few years, so perhaps the time has come to stop the run of poor returns.

Both Ocean Brass and Otterbourne will want to do the same after they also fell through the relegation trap door.

Two experienced campaigners in Jonathan Camps and Gareth Pritchard are charged with the task of getting the bands back on track.

There should be a great deal of interest in the appearance of Sidmouth Town – who claimed their promotion on the back of two successive Third Section titles and a fine 6th place finish at the National Finals.

Adrian Harvey could be leading a band more than capable of making it a hat trick of Area titles this weekend.

Meanwhile, Swindon Pegasus will be looking to return to the form that saw them post a podium finish in 2010 and build on the solid performance at the Wessex contest late last year.

Promoted Weston Brass could be a dark horse after gaining promotion on the back of some very consistent contest performances – including a win and a 7th place finish in the Third and Second Sections at the Torquay event.

That just leaves Wotton-under-Edge, who will be hoping to secure a top ten finish after coming 12th in the past two years.

Pendennis Brass Falmouth are the even money favourites for us, with St Pinnock our bet to join them in Cheltenham.

We think they may be pushed all the way by Bugle, Ocean Brass, Lympstone South West Telecoms and Sundhouse Brass, with Sidmouth our dark horse