Just two Devil qualification places up for grabs and plenty of contenders fancying their chances... 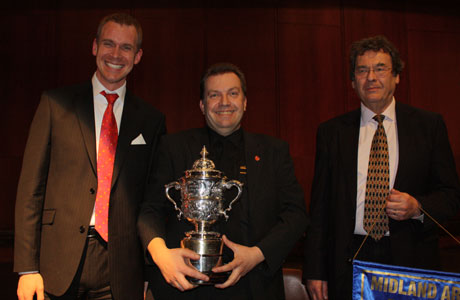 Can Virtuosi GUS make it a hat trick of wins?

A return to Royal Albert Hall seems destined for the in-form Virtuosi GUS, but can anyone deny them at Bedworth?

After claiming the runners up spot at the Butlins Mineworkers Championships at the start of 2012, John Berryman’s band should be confident of taking on the mammoth task of successfully navigating the dangerous waters that Derek Bourgeois created with ‘Devil in the Deep Blue Sea.’

Heck of an exam

For anyone to snatch the top spot away from them though they must first conquer a test piece that is proving to be a one heck of an examination of top flight credentials.

Adjudicators David Read and Derek Broadbent (right) could have a tough task sifting through the rivals to find the best two bands for London, where the qualifiers have not been real contenders for some time.

12th & 19th last year and only one top six finish in the past ten years tells its own story.

Hope springs eternal however - and the two men in the box certainly know this score inside out, so we don't think there will be too many complaints from the in the bar  'hard done by' bands..

Another band looking at another crack at the Albert Hall will be Thoresby Colliery who, with Ian Porthouse in charge, claimed second place last year.

Under the baton of Brian Grant they will be looking to build on a slightly uneven performance at Butlins, where they showed tantalising glimpses of their potential over the two days (3rd on the set work), despite ending a modest 7th overall.

Newstead should never be discounted when discussing the qualification hopefuls.

They are never far from the prizes at this event and with Duncan Beckley at the helm they will be well prepared for sure as they look to head to London for the first time since 2009.

Two other bands to keep an eye on would be Jaguar Land Rover and Derwent Brass.

Both produced solid contest performances throughout last year and have two wily campaigners at the helm in Dave Lea and Keith Leonard.

A brace of solid returns at the Spring Festival in the Grand Shield and Senior Cup showed their potential, although Land Rover didn’t really hit form at Butlins where they ended 11th.

Derwent may well be boosted by the critical acclaim of their recent collaboration with composer Paul McGhee has received, which included a high profile concert run out of this test piece.

There is something of an unknown factor with the two bands that were promoted from the First Section.

Both Oddfellows and Jackfield Elcock Reisen enjoyed a great deal of great success at First Section level, although both will know that this is a significant step up in class.

Rob Boulter and Simon Platford though are top notch musicians who will be able to bring the best out of their bands.

Sovereign Brass has a bit of a hit and miss record here over the past few years, although the hits have been pretty impressive with a victory in 2005 and three podium finishes since.

They did come a disappointing 18th at the Senior Cup last year though, so it will be interesting to see what form they are in under the baton of David Maplestone.

Gresley Colliery and City of Coventry will also be looking to bounce back this year as low finishes may see them looking over their shoulders at the threat of possible relegation.

The talented Gary Wyatt takes the baton with Gresley as they look to carry on their move up the results table, whilst the great trombone player Alwyn Green has the task of inspiring City of Coventry’s relegation dogfight.

That just leaves the enigma that is Desford.

On their day they can more than hold their own in just about any high class company, but they have been prone to be very inconsistent here over the past few years – including 12 months ago when they just play to anything like their true potential.

They haven’t started the season too well either with a sloppy performance at Butlins which saw them end in 7th place against a field they really should have dominated.

Russell Gray and a band of talented players will be under some pressure then to perform well this weekend.

If it goes to form - and it is always a big if in these parts, then you tend to think that the quality of both Virtuosi GUS and Desford should come out on top.

They won't be taking anything for granted though, especially if Thoresby can repeat last year's form.

We think they should poush the top two the closest, whilst Newstead, Lan dRover and Derwent won't be too far behind, with our dark horse of Oddfellows coming up on the rails...