The smallest section of the weekend has perhaps the hardest test piece to overcome to get to the Finals.. 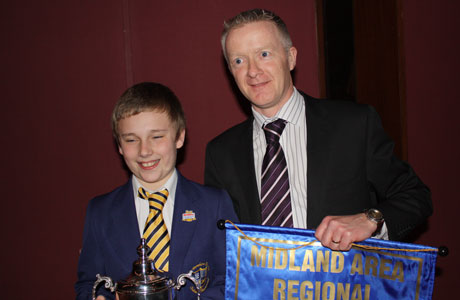 As has already been heard at both Blackpool and Bradford, ‘Cross Patonce’ is fast becoming a musical burden too heavy to carry off for many Second Section bands.

It remains a very fine work, but one that seems to have been erroneously thought of as a Second Section test piece.

To excuse the misplaced illusory metaphor, but not even Simon from Cyrene can help. He was last seen giving a helping hand a thousand few miles away from Bedworth...

There are some strong looking bands in this relatively small field of contenders, with three enjoying an early season run out at Butlins on a tough old ask from antiquity in the shape of ‘The Frogs’.

Will that give them an extra competitive edge though?

After going from strength to strength in 2011, one band looking to make an impression on adjudicators Malcolm Brownbill and Barry Thompson (right) will be Shirebrook Miner’s Welfare under Mark Wilcockson.

They just missed out last year but started this season in fine fettle as they claimed a cracking podium finish at Butlins in 3rd place.

More of that and they should be looking at their second Finals trip in three years.

You have to look long and hard into the record books to see the last time one MD led two bands to qualification in the same contest at any area, let alone here.

However, if Bakewell Silver show the same form as they did in winning on ‘Cross Patonce’ at the Derby contest earlier this year, Mark Wilcockson could be celebrating one heck of a double.

You wouldn’t bet against him doing just that.

Two bands that will look to be in the running will be Wigston and Foss Dyke.

Both dropped down from the First Section, although they claimed solid midfield finishes last year, so they should be confident of at least making a mark on the top six under the experienced batons of Garry Sleath and Richard Sandham.

Bilton Silver (Rugby) returns under the baton of David Stowell, who should revel in the opportunity to draw the music from this particular score.

Last year’s runner up went on to come a solid 8th at the National Finals so should be confident of being in the hunt once again for Cheltenham B&B forms.

Andrew Dennis takes the baton to lead the consistent Matlock as they seek their first finals appearance since 2008.

They will look to continue in the same vein that saw them claim 3rd at the Leicester contest in November.

Raunds Temperance produced a solid performance of ‘The Frogs’ at Butlins to come 7th against a high class field of rivals, so should be confident of doing well here after just missing out on a qualification place last time around in coming 3rd.

Robin Norman has bags of experience to call on, and it could come in handy of they are to return to the National Finals for the first time since 2005.

The two graduates from the Third Section, Amington and Avonbank (Evesham) both enjoyed a good 2011 season, with Amington reaching Cheltenham where they came 13th.

The band has come a long way in a short space of contesting time (they were in the Fourth Section in 2008), so they should be confident of holding their own despite a reality check in coming a disappointing 17th place at Butlins.

Avonbank meanwhile has been building solidly under the baton of Nick Smith, and gained promotion on the back of two consecutive podium finishes in the Third Section.

They could be a bit of a dark horse if they have been able to build on that.

Finally, Towcester Studio will hope that they can improve on last year’s 8th place and return to the form that saw them come 4th the year before.

Dave Jones is a canny MD (as any former sop player would be) and could well lead them back into the frame once more.

We are going for a double – with Mark Wilcockson the chap to lead both Shirebrook and Bakewell to Cheltenham.

It may be the 4BR ‘Kiss of Death’ but we think he’s a chap who can carry it off.

Bilton Silver and Foss Dyke should push the duo close though, with Matlock and Raunds in the mix too.

That dark horse we spoke of is Avonbank.