Which bands will master the the Devil and claim those priceless away day tickets to the Albert Hall? 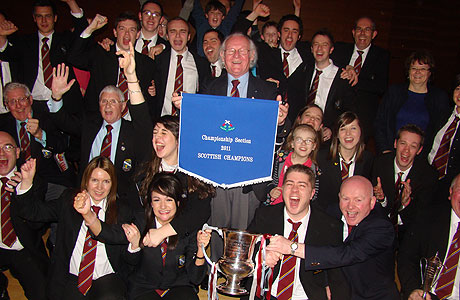 Can Whitburn hold onto its title?

It’s been a year of mixed fortunes to say the least for the bands in Scotland’s top flight.

For Kirkintilloch, a superb second place at the Grand Shield saw them return to the British Open at their first attempt, whilst at the other end of the scale a bitterly disappointed Exchange Communications Whitburn sank to a lowly twelfth in the same contest, despite having reclaimed the Scottish Championship just a couple of months previously in Perth.

Losing their Scottish Open crown following below par showings at the British Open and National Finals was also a bitter blow for Co-operative Funeralcare, although there’s bound to be a devilish fire in the belly of the band as they seek to win the Scottish Championship title for the eighth time since the turn of the millennium.

These three bands remain the bookies favourites to battle it out for a place in Kensington in October, especially as only one other rival has succeeded in breaking their stranglehold on the Scottish title since 2000.

That was Newtongrange Silver, who took the top prize back in 2005; as strong a sign as there could be that there remains a significant gulf between the elite bands and the rest of the field in Scotland’s top section.

‘The Devil and the Deep Blue Sea’ will provide a very stern test of all the competitors in Glenrothes and a young adjudication team of David Thornton and Jonathan Corry (both right) are bound to have plenty to mull over come the end of the day.

Bo’ness and Carriden survived relegation by the skin of its teeth in 2011 and although 6th at the Senior Cup was an encouraging recovery, 16th at the Scottish Open didn’t end the year on an upbeat note.

MD Steve Sykes will be anxious to ensure that they do not sink to the bottom of Davy Jones’ Locker this time round.

They finished 5th at the Scottish Challenge Shield against largely First Section competition.

Co-operative Funeralcare will be keen to win back the Scottish title after losing out to fierce rivals Exchange Communications Whitburn last year.

10th at the Albert Hall and 14th at the British Open did not mark 2011 out as a memorable season, but with the Yorkshire title already under Nick Childs’ belt, the Welshman is sure to instil a sense of extra determination as he renews his partnership with his Scottish team.

The vastly experienced Archie Hutchinson and Dalmellington finished a respectable 6th in Perth last year, and with a mid table 8th place at the Scottish Open they will be gunning to squeeze up the results table this time round.

Meanwhile, reigning champion Exchange Communications Whitburn will once again benefit from the direction of Ian Porthouse in its bid to hold onto the title.

Although they picked up a victory at the Dr Martin Trust contest back in September, results through the rest of 2011 were largely below par and the band will be keen to kick start 2012 in emphatic fashion.

With the euphoria of a fine performance at the European Championships still seeping through the contesting veins, Kingdom Brass managed to shrug off a poor showing at the Grand Shield to secure the Land o’ Burns and Fife Charities contests in style.

With the inspirational Frans Violet imported from Belgium to head the band’s assault in Glenrothes, Kingdom will have its sights firmly set on bettering last year’s 5th place.

Philip McCann will return to his native Scotland to spearhead Kirkintilloch’s push for qualification, and is sure to bring his usual brand of interpretative insight to their performance as the band looks to return to the Albert Hall after coming a disappointing 4th here last year. 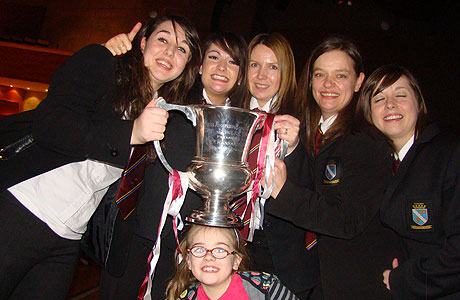 Will the Whitburn girls be on song in Glenrothes?

Kirkintilloch Kelvin’s fortunes have fluctuated between the Championship and First Sections for some years now, but after emerging victorious from the Scottish Challenge Shield long serving MD Charles Kennan will be keen to a make a mark.

Lochgelly’s inspired performance last year saw them come within a hairsbreadth of a place at the Albert Hall, but it didn’t quite kick start a season of lasting improvement.

Allan Ramsay will be looking for a repat performance this year, with a more lasting after effect if possible.

That leaves Newtongrange Silver who will want to put a disappointing 15th place at the Scottish Open behind them and look to improve on last year’s 7th place under the experienced baton of Nigel Boddice MBE.

A repeat of their 2005 victory may be a long short, but a top six place certainly is a good each way bet.

As has become something of the norm, it appears that it promises to be a very close battle between the big three in Glenrothes and although Lochgelly pushed Kirkintilloch into fourth place last time round, we reckon it could be a pretty tough act for them to repeat the feat on the Bourgeois.

With Nicholas Childs on a high after Black Dyke’s victory in Bradford we think the winning feeling could rub off on Co-operative Funeralcare, who may just pip Whitburn and Kirkintilloch, although it’s sure to be a real scrap for the two qualifying places on offer.

Kingdom Brass looks the best bet to break the mould and claim a place at the Albert Hall, whilst Lochgelly and Dalmellington should be in the mix once again. Our dark horse is newly promoted Kirkintilloch Kelvin.

How Scottish bands did in London: