Nice mountain views but not many great peaks to conquer for the First Section bands wishing to get to Cheltenham. 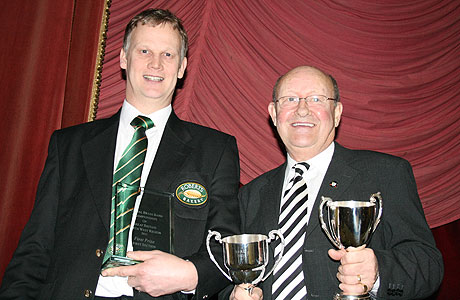 Can Robert's Bakery climb to the top of the pile again in the First Section?

In terms of the great contesting peaks bands have had to try and conquer over the years, Bertrand Moren’s ‘Mountain Views’ would make players as breathless at its summit as Julie Andrews at the beginning of ‘The Sound of Music’.

A musical Matterhorn this one ‘aint. It makes Eric Ball’s ‘High Peak’ seem like the north face of the Eiger.

For all its charm and transparency, this is little more than a pleasant evocation of the type of rugged terrain populated by Swiss cows herds, chocolate box houses and signing nuns.

Originally written as a Second Section test piece it will provide a quality field of bands here with the type of challenge that will not need a Tibetan sherpa and bottled oxygen to overcome.

You do have to wonder how on earth it is going to benefit bands with aspirations to climb the vertiginous slopes of true Championship test pieces, or help these quaifiers as they look to claim a first National title since 2004?

Still, conquered it must be, so which one of these evenly matched challengers will be first to plant their flag at the low level summit courtesy of Malcolm Brownbill (right)?

Last year’s winner, Robert’s Bakery returns hoping to be able to claim another qualification berth at the National Finals in Cheltenham where they ended 13th.

Colin Cranson is one of the most experienced MD’s around and so will be wary of taking this piece for granted as they seek their third victory in five years.

The ambitious Rainford will be looking to take the extra few steps to the summit this time as they look to carry on their impressive form under the baton of Neil Samuel.

Busy in the transfer market and full of confidence another podium slot or better is in their sights.

The equally ambitious Oldham (Lees) has been acclimatising to the rarified atmosphere of the First Section in the past two years, and may now be ready to claim yet another North West title under John Collins.

Decent returns at the Northern Open and Brass at the Guild Hall earlier this year suggests they may be there or thereabouts.

Freckleton won’t be taking anything for granted that’s for sure, after they came to the contest as favourites last year and departed in a disappointing 7th place.

The 2010 winners was 13th at the Grand Shield and have plenty of quality throughout their ranks.

You suspect they have been in high altitude training on the peaks of Cheshire to ensure they don’t come up short here this weekend once more.

Wardle Anderson Brass is another band that shot up through the lower slopes of North West banding a few years back, but has taken the last two seasons to acclimatise before making their assault on what would be a fourth title in six years if they win.

Sean Conway’s maturing band came 5th last year, so should be confident of challenging for a podium spot at the very least.

Great to see James Cant back at the helm with Silk Brass, as the Macclesfield band look to make a mark after finding life a bit tough against the top level contenders.

Relegation was perhaps expected, but they are a strong band with plenty of quality in the ranks, so should be confident of battling for a qualification place once again.

Poulton –le-Fylde has found difficulty in making a mark here in the past couple of seasons and could only manage 8th place at Brass at the Guild Hall.

James Shepherd certainly knows about the challenges of some of the great mountainous works of old (especially with his iconic appearance on the cover of the famous ’High Peak' LP at Black Dyke).

This work shouldn’t hold any terrors for his experienced band at Diggle as they look to continue their upwardly progress since their Second Section win in 2010.

There are a few tasty climbs to be found on the Isle of Man, so Manx Concert Brass should be well prepared under the baton of the experienced Ian Clague MBE as they make the trip across the Irish Sea looking to produce another solid performance after ending 9th last time out.

That leaves the two promoted bands of Haydock and Morecambe, both of whom are fronted by talented MDs in Mark Quinn and Andy Warriner.

Haydock will want to show that their early season form at Butlins where they came 16th was just a bit of a blip, whilst Morecambe could be the dark horse of the field after their success at the Northern Open albeit in the Second Section.

Reports of a possible top class Norwegian guide to help them reach the qualification camp below the summit are also being heard echoing from mountain tops....

Given that every one of these bands will be more than capable of playing this piece very well, it could be a very difficult task to find a winner – and not just for Malcolm Brownbill in the box.

Freckleton once again should be the band to beat if they come well prepared, although Rainford and Oldham (Lees) could well push all the way to being the band that plants the flag on the eventual summit.

Robert’s Bakery, Wardle and Morecambe should be confident of reaching the higher slopes too, with the dark horse of Diggle under James Shepherd looking to take advantage of any slips.

North West Bands at the Finals: