There will be the usual mix of great music and great entertainment on offer at Butlins this weekend.

On the stroke of 9.30am on Saturday morning, a performance of Philip Wilby’s ‘The Seasons’ in the Crazy Horse Theatre at Skegness will herald the start of the 2012 contesting season.

Given what is likely to transpire at contests throughout the banding world in the following months ahead, it’s also an appropriately named venue.

The perilous financial climate and chronic lack of players could well see some bands making a last stand of General Custer proportions before the year’s end.

Butlins is certainly doing their bit to help bands get full value for their investment in making it to the welcoming Skyline Resort.

Brain Eggleshaw and his team run the whole event with an enviable level of professionalism and good humour, whilst Festival Director Steve Walker has once again made sure that there is something for everyone to enjoy.

This year there is also the chance to help the mining community directly, with a massed hymn tune blow with Grimethorpe Colliery Band on the Sunday night in aid of the Welsh Miners Appeal Fund, which was set up following the tragic deaths of four mens at the Gleision Colliery in Wales last September.

As always there is plenty to tickle the taste buds – from the tasty food in the Yacht Club restaurant to the well chosen test pieces, whilst the bands that do catch the fancy of the adjudicators will head for home with their bank accounts swelled by a generous prize  fund.

The ‘Blue Riband’ Championship winner could well leave Skegness with over £8,000 to their name. 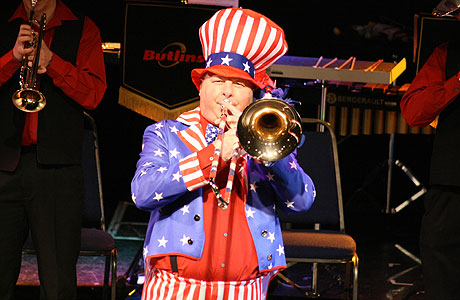 Stars in stripes in the Championship Section...

It’s not all wall to wall brass banding however – with some great entertainment provided by the Syd Lawrence Orchestra, Robin Jones and King Salsa, as well concerts from defending champion Flowers, Youth Brass 2000 and a very special Grimethorpe Colliery Re-union Band – with a host of former Grimey ‘greats’ testing out their lips once more.

The Grimethorpe theme is to be found in the various adjudication boxes too – with current and former players and conductors passing judgement on the competing bands.

Soprano legend Peter Roberts will be joined by recently re-appointed principal cornet Dr Roger Webster and former MD Ray Farr to pick a winner over two legs from 12 well matched top section contenders, whilst Steve Sykes and Richard Marshall get to sort out the massive field of 23 competitors in the First Section.

Roger and Mike Kilroy will be accessing their knowledge of Greek herpetology in the Second Section, whilst it’s great to see Graham O’Connor back in good health and enjoying banding life once more, as he’s joined by Kevin Holdgate in the tent for the Third Section.

Barry Thompson and Mark Walters are sure to find plenty to enjoy in the Fourth Section, whilst on Sunday, both men will certainly be left with smiles on their faces after judging the amazing playing talent that is sure to be featured in the cracking Junior and Youth events. 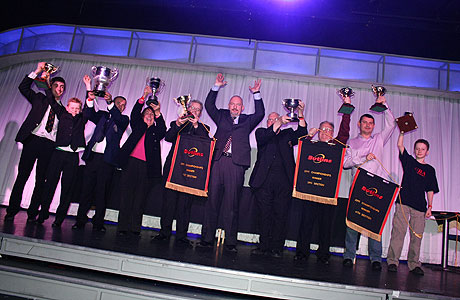 With all five senior contests taking place on the Saturday, listeners will be given the opportunity to enjoy a bit of ‘pick & mix’ approach at the various venues around the resort – whilst the Sunday will be taken up with the fun and games of the top section entertainment programmes in the main Centre Stage auditorium as well as the youth contests.

4BR will be there as usual to bring you the action as it happens for the Championship Section, as well as our tasty comments on 4BR Twitter. There will be plenty of news, views, opinion and comment too – from the very first note to the last.