4BR meets up with a composer determined to leave a musical bite mark on the brass band repertoire... 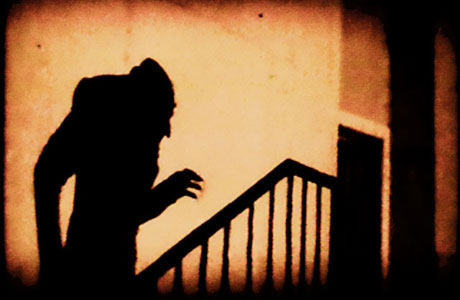 Emerging from the shadows: Phil Lawrence's work certainly has plenty to bite on...

Phil Lawrence is one of the more colourful, interesting and innovative composers who have dipped their toes into the brass band waters over recent years.

However, the majority of those compositions remain an enigma for listeners and performers alike, despite the critical acclaim his musical output has achieved.

His major compositions have been performed all over the musical world, whilst his commercial works are heard almost every day accompanying television adverts and films, yet brass bands haven't really enjoyed playing more than a handful of his works.

4BR caught up with Phil (right) at his temporary base at Shepperton Studios, to find out more about what music he has ready and waiting to be picked up by what he hopes is a banding world in search of innovative inspiration.

For a composer with a CV that includes everyone and everything from Edge Hill BR Band and CWS Manchester, the Halle and the Royal Opera Covent Garden, to his latest film project of re-scoring the remake of the iconic western ‘The Magnificent Seven’, Lawrence still seems puzzled that the banding world has proven to be such a minefield of missed opportunities and unfulfilled promises.

So why, since his first bespoke work was written way back in 1989, does he believe his compositions remain on the brass band margins?

”My first composition emerged when Paul Cosh asked me for a short one-movement tone poem for the Guildhall which had to have audience appeal based on average First Section standard,” he says.

”My interest in film music led to ‘Castles & Dances’, which later became (and was used in Australia in 2009) as ‘A Day In The Life Of A Knight’.

It was popular and later recorded by Fairey Geneva on the CD ‘It’s Not Unusual’, but despite me thinking it was an ideal test piece I did write it in a way that didn’t have the usual pyrotechnical cadenzas and elongated cut & paste repeats.

I wanted performers to be challenged by high quality music not high difficulty hurdles.”

However, the serendipitous composer’s life meant that just when a possible brass band door was about to open, a more lucrative one in television advertising beckoned instead.

He chuckles: ”I did nothing for brass bands for a few years, as ad agencies seemed to enjoy the bespoke snippets I was able to produce for them much more. The pay was better per note too.”

Subsequently he enjoyed himself with orchestral transcriptions, from Debussy to Wagner before, as he recalls, the brass band bug returned once more.

”I wanted to do something a bit different so I based a major work on Gregorian Chant, where simple harmonies are used to inspire more complex ones within the moving tapestry of the music.”

So, ‘Gregoritas’ at a healthy 16 minutes in length, and in his own opinion, as demanding as any top flight test piece of the last decade or more was written, premiered in 2003 by Waitakere Brass with Andrew Snell at the helm. 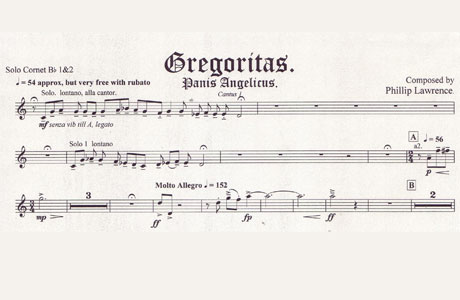 It’s a work he is very proud of: “It nails any band in terms of technicality, but it still has musical authority and not artifice.”

To support his claim he shows us a snippet of correspondence from Elgar Howarth, which reads: “…it’s the first modern test piece that has been written first as a piece of music but reads like a tone poem for band without those end seat theatrical grillings!”

You sense the bemusement in his voice when says: “That made me very proud, yet despite the acknowledgements when it was presented to be used in the UK it was ignored.

Perhaps my supporters were the type of serious composers the banding world was trying to get away from, even though the piece was used for the Maud Wright competition for young conductors.”

Undeterred he built up a catalogue of around 160 works including, ‘Bach Variations’, via the insistence of Paul Cosh and Judith Bingham.

He also wrote the intriguing 100th anniversary ‘Letchworth Garden City’ - a work inspired by one of the most innovative pieces of Victorian town planning.

It celebrates Ebenezer Howard’s vision to create a city in the country away from the inner city slums and their associated problems.

The amazing plans (shown below) inspired Phil to write a three movement suite that mirrored Howard’s radical thinking, including an opening movement in neo classical style made up of ‘satellite’ groups of players (mirroring the satellite cities branched from the central urban core)

With an idyllic representation of rurality to follow, the finale is provided by recalling the Letchworth settlers themselves – from choral singing Quakers to modern day commuters. 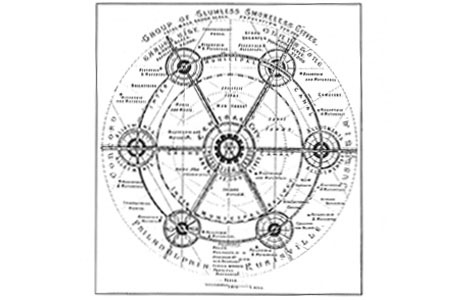 Unfortunately, Howard’s innovative plans never progressed beyond the drawing board, so 21st century Letchworth Garden City never quite became the blueprint he wanted for a new era of social integration.

However the inspiration is something Phil Lawrence can certainly relate to: “He was some thinker – not afraid to try something very different,” he says. “I like that. How much better things would have been if his ideas had taken off.”

That sense of inventiveness has been the composer’s own raison d’etre, with his ‘Bach Variations’ producing an innovative approach to an altogether different progressive inspiration.

With its original chorale metamorphosed through tri-tonality and rhythmical variations, it’s a very demanding, but accessible work that he believes contains plenty of musical rewards for the technical endeavours that must overcome, as Phil rather playfully describes!

”The first movement has a basic stretching of the chorale’s four-part harmony before we have a Bach style toccata.

However, there’s no grilling for any player to do an impression of a pig being wrapped in razor wire! I feel its a very clean, no hiding place piece with its own musical rewards.” 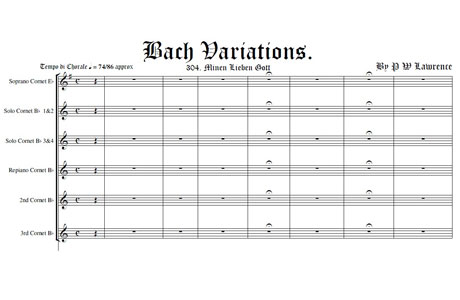 Innovation based on Bach's inspiration

Phil’s music has been recorded, with Fairey using works on the well received ‘It’s Not Unusual’ release – the title track being his own take on the Tom Jones hip wiggling blockbuster, so beloved of generations of karaoke singers the world over.

"I actually know some brass band composers who have looked down their noses for my commercial arrangements on that release such as ‘Thriller’ - but bands need all kinds of music to entertain.

I'm certainly not an arranger that waits for the next Disney blockbuster to hit the UK. You need a diverse approach – from Mahler to Maynard, Wagner to Kreisler!"

However, away from the hit parade candyfloss, Phil’s imagination has also seen him produce two very different pieces.

’A Long Ride in a Static Machine’ is his tone poem inspired by the pace of motoring life on the M25 orbital ring road around London (subtitled, ‘Watching the ants at play on the hard shoulder’), whilst ‘Time Machine’ was written for the 2008 RNCM Festival of Brass. 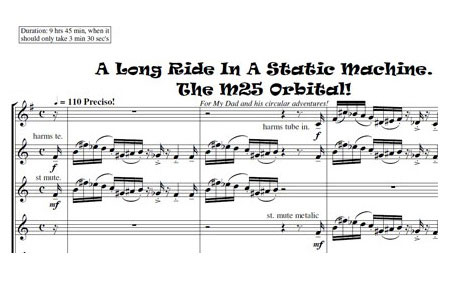 It seems the essence of time inspires him in different ways.

“I live more or less at the bottom of the M11, so getting anywhere means a trip on the M25,” he says with unconcealed despair in his voice.

It’s a work with a rather downbeat ending too: “The whole M25 nightmare ends in a large pile up where the composer metaphorically pulls the trigger of a shotgun on himself realising that motoring will never be the same again!”

In contrast, ‘Time Machine’ is full of hope. “It’s a short virtuosic tone poem,” he says. “The machine brings an illusion of majesty and grandeur, but the speed of time travel cannot be fathomed until it eventually arrives, dazzling and pulsating with messages from civilisations past, present and future.”

He chuckles, “It’s the complete opposite to the M25.”

From medieval knights to town planners, Bach to HG Wells and the motorway road to hell: Is there a topic this compositional magpie mind cannot be inspired by? 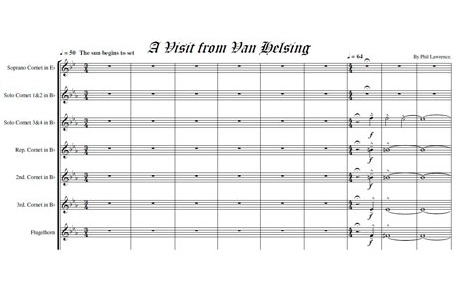 It seems not – especially as his latest work sees him delve into the crepuscular darkness of Bram Stoker’s ‘Dracula’.

”I started composing for a film in 2007, but the project was abandoned,” he says, before appropriately revealing that he revisited the musical fragments one dark winter night.

”I enjoy the horror genre so I found myself bringing it back to life so to speak!”

’A Visit from Van Helsing’ (Van Helsing being the Count’s stake wielding nemesis), sees the composer thoroughly enjoying himself with an evocative work full of chilling effects and high paced action, that ends with the gore fest of a well placed stake through the heart.

“The opening uses huge blocks of ensemble (a very big blow) sound to describe the powerful forces that Dracula can wield against the local community before he strides off towards the local village for a few pints of Transylvania’s best, Carlsberg Peasant Brew!

Van Helsing gets a look in and tries a chant-like prayer with the holy crisp, but Dracula twists it back onto him (in a 12 tone version) to pour scorn on his futile attempts.

Undeterred though he eventually finds Dracula’s resting place for a final fight and stake supper!”

At a time when brass band audiences are becoming increasingly jaded by popcorn film music plagiarism, perhaps the time has come for those in charge of picking major contesting works to take a closer look at a composer who will certainly give them something inventive, innovative and different - even a lasting bite mark or two...

It could be a move that bring Phil Lawrence a long overdue reward.