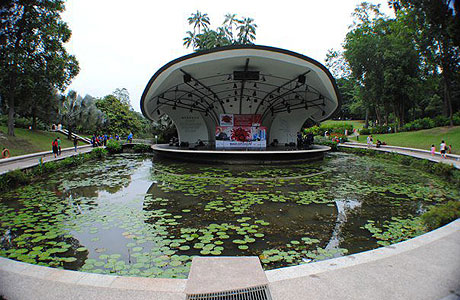 The Desford Band has been a regular visitor to the Far East for well over a decade or more now.

Their latest trip recently saw Singapore and Thailand added to the visitor’s stamps in passports already bearing the visa details of the Philippines and Malaysia of previous years.

Their strong links to the region come through David Smith, Principal Trumpet of the Singapore Symphony Orchestra and occasional Desford ‘top-man’.

David is also a Director of the burgeoning Brass Explosion Festival, at which this year Desford featured as a headlining act.

The Festival only started in 2010, but has already become well established as a major music attraction in the Far East.

With a developing educational side it’s youth solo competition attracted numerous local entrants, enticed by the chance to enjoy masterclasses and tuition from a host of top brass musicians.

At the end of the Festival well over 100 young brass players came together to perform as the Brass Explosion ‘Training Band’. 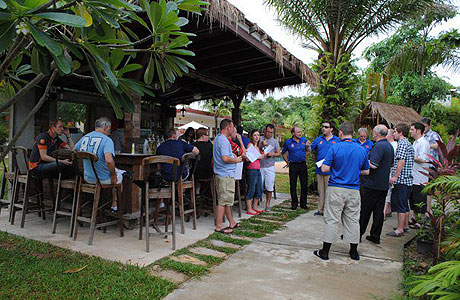 Gourlay at the helm

However, despite their truly world class abilities, the undoubted superstar was the inimitable Australian jazz musician and multi-instrumentalist, James Morrison.

Following their 22 hour long haul flight from the UK, the band was quickly down to musical business with a performance at the very exclusive Singapore Polo Club, for an al fresco big band concert accompanying James Morrison and an ‘all-star’ jazz band from the host city.

With the stunning Singapore skyline providing the backdrop, James was on stupendous form, wowing the audi
ence with his craftsmanship on trumpet, trombone and bass trumpet, with a bit of piano thrown in for good measure.

From the classic, ‘What a Wonderful World’, to his high-octane arrangement of ‘The Flintstones’, his rapport with the audience was natural and funny - easily understood when you learn that he is also a presenter of Top Gear in Australia (as well as marrying a former Miss Australia). He is one heck of a cool guy. 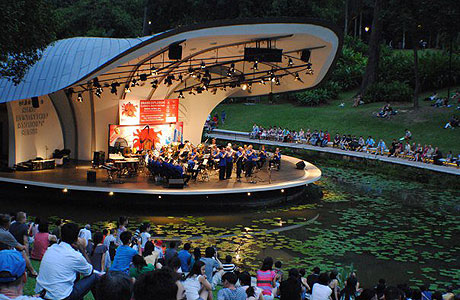 Not a bad bandstand in the park...

The following evening, Desford performed in the idyllic setting of the Singapore Botanical Gardens.

The main stage - used several times a year by the Symphony Orchestra and other major acts - was very impressive, and quite a sight surrounded by a lily pond and a border of beautiful flora and fauna.

An audience of well over 2,000 people relaxed on picnic blankets on the expansive hill opposite and thoroughly enjoyed Desford’s playing on a balmy Singapore evening.

Crowd pleasers such as ‘Toccata in D Minor’, ‘Music’, and the ‘Pines of Rome’ were interspersed by solo features from Katrina Marzella in Paul Lovatt-Cooper’s ‘Donegal Bay’, whilst the cornet team put a smile on everyone’s face with Bugler’s Holiday. 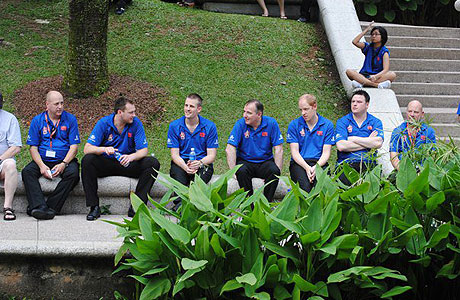 A remarkable setting sun lazily hovered on the horizon as the audience filed away after an entertaining performance to savour from a band on cracking form.

The next day, the players travelled round several schools in the city as part of Desford’s contribution to the Festival’s educational work.

The success of the ‘shows’ (there is no other way to describe the highly enjoyable events) was enhanced by the remarkable communication talents of James Gourlay.

His wonderful presentations and explanations to the children were mesmerising – as wide-eyed participants lapped up every word and action of the Scotsman who performed like a man half his age!

It was informative fun and games, inspiring youngsters to get involved in brass music making – summed up by the unmistakable giggles of pleasure when the huge presence of the inimitable Dean Morley saw him pick up unsuspecting young ‘victims’ and proceed to playfully stick their heads into the bell of his tuba.

Desford’s major performance took place at the Brass Explosion Gala Concert, which brought the Festival to a close on Monday evening.

As well as performing their own set, the band also accompanied David Childs, Scott Hartman and Katrina Marzella in their splendid performances – the quality of which held the audience spellbound in admiration.

If that was good, the best was yet to come, with James Morrison.

What a performance it was!

James left audience and band members speechless with his rip-roaring solos, imaginative improvisation and screaming trumpet lines. His signature tune, the gritty gospel version of ‘Old Rugged Cross’, brought the concert hall to its feet – a fitting end to a truly memorable night of music making. 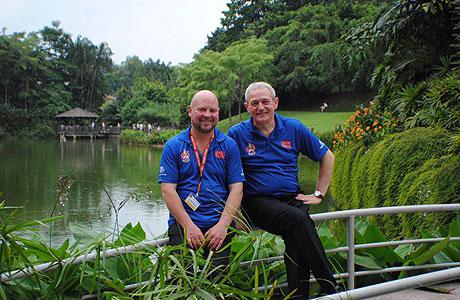 After saying goodbye to a host of new friends (and fans) at the final party, the band was soon heading to Thailand, where they performed at the British School in Phuket, before players were allowed a little well earned ‘R & R’ at its beach resort.

The final few days of the trip were also packed with snake shows, elephant rides (James Gourlay and his wife Lea enjoying the experience to the full), bartering in local markets for presents, and sampling the amazing local seafood.

Needless to say, many band members were also partial to the country’s famous Mai Thai cocktail served in a pineapple!

Desford will return again in 2012. After this year’s experiences, they are already counting down the days on the calendar.