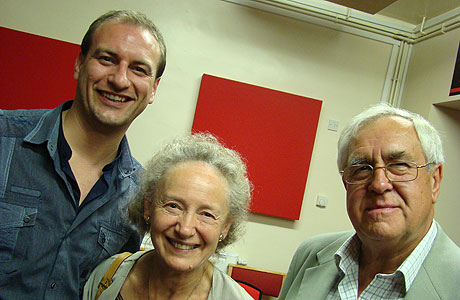 Black Dyke may not be competing at the National Finals in London in October, but nonetheless, last week they still ensured they delivered a performance marker for the contest itself.

Thursday evening saw a group of invited guests make their way to Queensbury to enjoy a rather unique premiere of ‘Breath of Souls’ by Paul Lovatt-Cooper – the test piece to be played by a further 20 bands at the Royal Albert Hall.

The event was organised by MD Dr Nicholas Childs to provide an informed introduction to Paul’s new work, as well as give the opportunity to ask questions of the composer and gain some early insight into his new composition and especially its multiple-choice cadenzas with the help of some of the band’s principal players.

And despite a 15-mile tailback of traffic on the M62 motorway, over 20 people made it in time to enjoy a few drinks, an introductory talk and video presentation in the player’s lounge at the Black Dyke bandroom.

The idea was to bring transparency and understanding about the new test piece, so that conductors, players, adjudicators, organisers and brass band lovers could get to know more about the work which will be used to celebrate the 100th running of the National Brass Band Championships of Great Britain.

As the MD told 4BR: “I was keen to ensure that as many people as possible got the opportunity to hear the piece before the contest. It’s about bringing the music into the public domain, making sure people hear it, understand it and enjoy it.

I believe we have a duty to help promote new music to as wide an audience as we can – not just those who sit in the Albert Hall for the contest itself.” And amongst those first people to enjoy ‘Breath of Souls’ in the public domain included Wayland and Yvonne Roberts, the retired teachers and Black Dyke supporters who commissioned Paul to write the work as a personal thank you for the kindness and welcome they have enjoyed ever since they first set foot in the Queensbury bandroom way back in 1966.

”We first came here all those years ago as two hard up young teachers,” Wayland recalled.  “The welcome we received then made a huge impression on us, and we became life long supporters of the band – even following them to Australia a couple of years ago after we retired.”

”The piece is a thank you,” he added. “We have been very fortunate to enjoy such wonderful music making and friendship from everyone connected with the band for over 45 years now. We love Paul’s music and wanted to be able to support his endeavours. It’s a composition that has a real meaning to us both.”

Joined by Philip Morris and Nicola Bland from event organisers Kapitol Promotions, leading adjudicators such as David Read (who will be in the box with Luc Vertommen and Rob Wiffen), members of the press, former players, conductors and assorted movers and shakers in the banding movement, the evening started with brief introductions from the Black Dyke MD, the composer and Wayland Roberts.

The band itself was not sat in the rehearsal room that now provides the 22 times National champion with a state of the art facility on the lower floor of their famous headquarters, but they were certainly heard in full flow, thanks to a tremendous bit of recording work from Richard Scott.

With Black Dyke enjoying a short rehearsal break after their recent victory at the English National Championship, the players were given a couple of days to acquaint themselves with the piece before they made an impromptu CD recording at Morley Town Hall at the end of a recent recording session.

”It does mean that there are a few scratchy moments here and there,” Dr Childs (right) admitted, “But I don’t mind that as the idea was to give conductors and players a guide to work from – not a definitive performance.”

So with everyone sat in the rehearsal chairs usually occupied by the Dyke players, and with scores in hand, the composer led the ‘study group’ through the 15 minute long piece, providing detailed insight into its technical construction as well as musical inspiration as he went along.

His desire to provide a test piece worthy of the occasion, and of the 20 qualifiers has seen him produce a composition of immense technical difficulty – although he hopes he hasn’t lost his knack of making sure the audience will whistle his trademark big tunes on the way home.

”I wanted it to challenge the very best, so it’s not easy,” he admitted. “However, I also wanted it to be a piece that would appeal to listeners too, so I’ve tried to balance the technical challenges with plenty of musicality.”

With the explanations out of the way it was time to hear the piece itself. A quick flick of a button and the first high paced strains of ‘Breath of Souls’ were heard.

15 minutes later (and with a crafty bit of added applause added to the CD recording!) a breathless group of premiere listeners were asked for their first impressions.

Questions over tempi (its as fast as Usian Bolt in full flow at the beginning and especially the end), dynamics (there is a great deal of very quiet, detailed filigree work), mutes (there are none and the composer made it very, very plain he didn’t want to hear any), were also accompanied by queries over the position of the adjudicator’s box and those multiple-choice cadenzas (all of which were played expertly by Black Dyke’s principal players on the two performances recorded for the occasion)

A detailed discussion developed – with Paul and Nicholas Childs asking as well as answering, a number of performance related issues as well as the players explaining their personal approaches to the piece and those soon to be famous cadenzas.

And if first impressions were anything to go by then the Royal Albert Hall will be filled with happy punters, even if the players and the MDs of the competing bands will have had to have worked their socks off if they hope to leave Kensington with their hands on the famous old trophy.

”It’s a great piece,” Philip Morris told 4BR. “I’m sure people will enjoy it. Hearing it in this way has really whetted the appetite for the Royal Albert Hall.”

David Read (right) also acknowledged the benefits of an early hearing too. “Having the opportunity to study the score and have a good working idea about the piece through a recording will be of real help to myself and the other judges. I’m already picking out some areas that I feel will test all the bands.”

For the composer, more hard work is to follow over the next few weeks.

Work is well underway to ensure all the competing bands will be able to get their hands on the piece as soon as possible, whilst study scores will be produced and the recording used at the launch will be posted on Paul’s own website.

And despite the thought of even more work ahead, he understandably can’t wait to hear his composition played under contest conditions at the Albert Hall.

“It’s such an honour as well as a thrill that I’m counting down the days already.”