The Fourth Section in London is alive and kicking — and full of cracking qualifying bands. 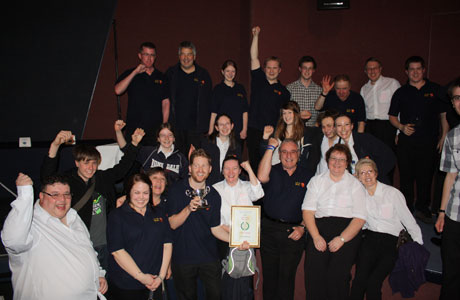 Alive and kicking for LGB Brass

“You are keeping Fourth Section banding alive down here because it’s dying up North”.

The words of Duncan Beckley were spoken like a rallying cry at Stevenage – and from a man born in London and brought up in Wakefield he could justifiably claim to know what he was talking about.

It was a clarion call that raised a justifiable cheer from the audience waiting for the results in the Gordon Craig Theatre, although it didn’t conceal the fact that in 2000, 31 bands contested the Fourth Section contest here.

Grass roots banding may well be in terminal decline in certain regions north of the Watford Gap, but it was worth remembering that this area has been fairly decimated in the past decade too.

That said, the reduction in numbers has in many ways resulted in a significant improvement in the overall standard of playing at the Area contest.

Less has become more. Where Yorkshire needs quantity as well as quality, Stevenage seems to have both on the evidence of this enjoyable contest.

No shortage of style

The 16 bands that tackled John Golland’s ‘Prelude, Song & Dance’ did so with enthusiasm, an infectious sense of enjoyment and no shortage of musical style.

It made for a closely fought, highly enjoyable competition that prompted Duncan Beckley to compliment the bands on the fact that every one of them had succeeded in drawing something of quality from the score to a greater or lesser degree.

For the adjudicator though, there was only one band that fully united good banding basics to the stylistic considerations of each of the movements to give a performance that in his words, ‘had it all’.

That was without doubt LGB Brass, conducted with a wonderful sense of controlled authority by Ian Stewart, who was to be seen later in the day in his other persona as principal trombone with Friary Guildford.

He directed a rendition marked by sensible tempos and clearly defined style, that enabled the players to create a majestic opening, a graceful ‘Song’, which included a solo cornet that wouldn’t have been out of place in the top section, and a nimble, fleet footed ‘Dance’ that rounded off a little gem of an interpretation.

Despite having just dropped down to the Fourth Section, on this evidence LGB Brass is a quality Third Section outfit in the making.

Emerging as the deserved runner up to join LGB there was Harwich R.B.L.

They certainly showed that they had built on last year’s 4th place by upping their game off the early number 3 draw to produce a cracking performance that set a very high marker that only LGB as the penultimate band could beat.

It was confident, solid ensemble playing, excellently led by the MD, that had a real feel for the style required in outer movements in particular.

Just a few little scruffy edges here and there stopped them from becoming champions.

The first half of the contest proved to be a bit of an eye opener, with no less than five high quality performances almost coming one after each other.

Bradwell Silver (drawn 2) and Amersham (7), will perhaps be disappointed at just missing out on qualification (the 16 bands meant 2 not 3 qualifiers) but both can be mighty proud of their efforts.

Each delivered flowing accounts, not entirely error free, but certainly full of solid solo work, balanced ensemble playing and a feel for the stylistic nuances between the three movements.

For two bands with some very young players in the ranks (Bradwell had one nipper the size of a flugel case) these were performances rich in future potential.

There was very little to choose between the bands that eventually came fifth, sixth and seventh, with MK Development, Bletchington Silver and Great Yarmouth Brass all producing performances of real purpose and musical intent.

MK Development certainly had a fair sprinkling of youngsters in their ranks, all of whom played their part in producing a vibrant, tuneful account full of confidence off the dreaded number 1 draw.

Meanwhile, Bletchington’s impressively neat performance seemed to show a band playing within itself, and a little more risk taking might just have pushed them a couple of places higher.

Great Yarmouth on the other hand certainly went out of their way to capture the spirit and excitement of the music extremely well, albeit held back by a touch of fragility in the ‘Song’.

Duncan Beckley would have had a difficult task comparing and contrasting the performances that eventually filled the midfield placings in the results table.

Letchworth Garden City, Cottenham, E.P.B. and Snowdon Colliery, all displayed extended passages of quality ensemble work and secure solo lines, but whereas the bands that finished above them were able to maintain a consistency in their work, these were more uneven, with some nasty moments just taking the gloss of some well delivered playing.

The young players of Letchworth in particular should take great heart from 8th place – a jump of eight places from 2010, whilst 9th for Cambridge based Cottenham marked a fine achievement for a band that hasn’t competed here for a number of years.

Royston, City of Oxford and Kings Lynn Town all battled valiantly with the test piece and left Stevenage after producing performances of merit.

They were not without nervousness and poor tuning, but there was an underlying sense of musicality about the way in which their players tried to bring a sense of style, warm and wit to their renditions.

All were a bit lumpy and bumpy, but none left them with anything more than a few quick healing bruises.

Cobham and Charles Church Camberley did find the going tough, although as with all of the performances on the day, there were also periods of quality that certainly caught the ear on more than the odd occasion.

Despite the difficulties, these were also renditions that would have more than held their own in a few other areas we have listened to this year.

Duncan Beckley’s positive words will not have been lost on the players that were present in the hall to hear the results.

And to be fair he wasn’t just saying them for the sake of an easy ride home in his car either.

The substance behind them was accurate – this was a very decent Fourth Section contest and one that was better than most we have heard this year.

There was strength in depth, with the top half a dozen, and the qualifiers in particular, as good as anything anywhere.

Fourth Section banding in the Southern Counties is indeed alive and well.