Just seven contenders, but plenty to aim for: with trips to Kensington and Rotterdam for those who master Wilby's iconic work. 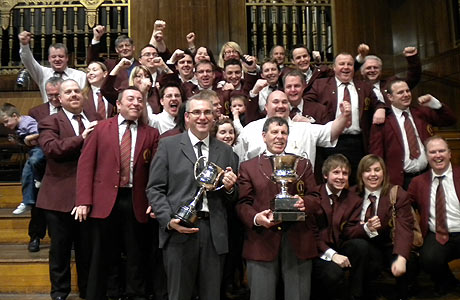 Just seven bands will take to the stage at the Brangwyn Hall on Sunday afternoon in search of the good value tickets for London and the rather pricier one for Rotterdam.

With Cory already pre-qualified thanks to yet another podium finish at the Albert Hall, there are two spots up for grabs for October, whilst if either they or Tredegar triumph in Montreux in May, a second Welsh band will be invited to make the trip to represent the Principality at the Europeans.

Quality if not quantity then; with the triple European champions up against the British Open winners, Senior Trophy title-holders, the current Welsh League champion and a rival Open contender.

David Read MBE is the man in the box, and should have plenty to ponder on what promises to be a if short but climactic end to the weekend.

Reigning champion Tredegar enjoyed a memorable 2010, and has started 2011 in decent shape too, with a classy defence of their Welsh Open Entertainment title in Porthcawl.

Ian Porthouse has a strong, highly versatile band under his command - one that is determined to build on that remarkable season, whilst the MD has already shown that he can provide a winning interpretation on ‘Paganini’, by leading Whitburn to the Scottish title.

This is the first real test of their ‘champions’ mettle though.

Meanwhile, European champion Cory will be determined to re-impose their domestic supremacy after being beaten by their rivals twelve months ago.

Despite their hat trick triumph in Linz, 2010 wasn’t a memorable year (unlike 2009) – with a batch of near misses at the other majors.

They will not want that to happen again.

The major challenges to the Cory/Tredegar hegemony (they have won the title 15 times in the last 17 years between them) is expected to come from BTM and Tongwynlais Temperance.

BTM has recovered its poise and confidence after a disastrous Pontins outing late last year and posted solid performances under Tom Davoren in claiming podium finishes at Yeovil and Porthcawl – where they pushed Tredegar closer than many expected.

They last won the title in 1993, and will be looking to claim a qualification place for the first time since 2008.

Tongwynlais meanwhile has taken a little time to get fully into contest shape this season after an excellent 2010, which saw solid performances at both the Open and Nationals.

A non descript appearance at Yeovil where they came 5th, was followed by a quirky old outing at Porthcawl in ending in 3rd, so Phil Harper and his band will know they will have to up the ante in this company if they are to return to Kensington once more.

The last North Wales band to claim the title was Point of Ayr back in 1999, so a victory for the contenders down from the A55 corridor is overdue.

The challenge is headed this year by two strong contenders in Beaumaris and Northop, both led by experienced campaigners in Gwyn Evans and Thomas Wyss.

Beaumaris showed their qualities in winning the Senior Trophy in considerable style and posting a podium finish at the Northern Open, whilst Northop claimed a top six finish at the same Blackpool event and were a little unlucky to only finish 7th at Pontins.

Both have plenty of quality in the ranks as they seek to return to London for the first time since 2004 and 2009 respectively.

That just leaves Markham & District, who last won this contest back in 1969, but whose consistency in the First Section has finally earned them a Championship return for the first time since 1991.

Their last competitive outing was at the end of season Welsh League contest in Blaenavon where they came 4th in the top section, so Adrian Morton and his team will know they will have to pull out all the stops against this tough field of rivals to make a mark.

Despite already being qualified Cory will not want to end behind their great rivals Tredegar for a second year, and that should just give them the edge – but it could be exceptionally close.

BTM has all the attributes and confidence to capture the second qualification spot ahead of Tongwynlais with Beaumaris leading the North Wales challenge ahead of Northop, with Markham the dark horse.

How Welsh Bands did at the Finals: