Reg Vardy returned to winning ways last year, so can anyone stop them starting on a roll of victories here again? 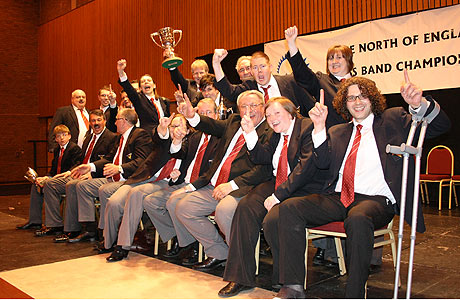 Normal service was resumed in the Championship Section last year when Reg Vardy reclaimed the title lost in 2009.

They have now won eight times in the last nine years, and are favourites to do it again this weekend too.

It would be great to see a more concerted challenge for Jim Davies (right) to sort out  to their domestic hegemony than just the occasional victory from their rivals, but as has been the case for the best part of a decade or more now, they remain the band to beat on their home patch.

That domestic supremacy wasn’t translated into substantive success away from home in the past year though – and neither has it inspired their rivals to up their contesting ante either.

London saw Reg Vardy and Riverside end in 15th & 19th places respectively, whilst there were disappointing returns at other events too.

The area needs a leading competitor that is more than just a big fish in a small pond and more bands that can feed off its hard won success when it does come too.

The Nationals were a real disappointment after the promise shown by the qualifiers in 2008 & 2009, and with no British Open representative and no promotions to join Reg Vardy as the sole contender in the Grand Shield, any national successes at second tier events such as the Spring Festival contests, Pontins and Butlins must be put into perspective.

Reg Vardy continues to punch above its weight – but in 2010 that was only occasionally, with a fine 4th place at the English National the only highlight in what away from home turf was a disappointing year.

On their day they can mix it in top class company, but it was a frustratingly inconsistent season – with that high at Preston offset by other lows.

Nicholas Childs returns following his success with Woodfalls in Torquay, so they should be favourites to enjoy more local success.

The hope is that it can be translated into something even bigger and better for the rest of the year.

The 2009 champion EYMS will want to forget about their lack lustre defence of their title last year, when they fell to their lowest position in the results table for well over a decade.

Allan Morrison has been brought into to help them in their quest to return to London, and with a solid performance at the Senior Cup and another at Butlins they should be confident of doing that, and maybe even celebrate some title winning silverware once more.

Fishburn won this title in 2001 and last headed to London in 2006, so they will be hoping to push on from last year’s 3rd place finish under the baton of John Ward.

A top six result at the Senior Cup and a midfield finish at the Scottish Open showed promise, but they will know they will have to up their form if they are to start looking for B&B around Kensington in October.

NASUWT Riverside made their first London appearance since 2005 last year, but found life difficult at the Albert Hall where they finished 19th.

The qualification did boost contesting confidence however, as they finished a solid 11th at the Senior Cup.

However, they will know they will also have to be on top of their game of they are to return to Kensington.

Easington Colliery has produced consistent performances over the last few years to end in and around the top six.

They will be looking to make a move up the results table for a possible podium finish under David Hirst, but they know they will have to up their form from that shown in ending a lowly 15th at the Senior Cup.

Meanwhile, GT Group Peterlee will look to build on their 8th place finish last year with the help of the experienced Norman Law.

12th place at Pontins was a disappointment, but they should be confident of pushing for the top six this time around.

Kirkbymoorside will also be looking to better last year’s 5th place finish as they build on a disappointing 15th place at the Scottish Open under John Woodward.

A good each way bet for a podium place may be found in Felling, who have put in strong performances in the last three years.

The talented Steve Malcolm leads their assault boosted by solid returns at the Senior Trophy and Scottish Open.

There will be plenty of interest in Barton Town as the band, which has made remarkable progress from the Fourth to the Championship Section in just six years, makes its appearance under the baton of Richard Evans.

It would be a fairytale to think they could make it a full house of regional titles, but not so far fetched that they could very well surprise their rivals and book a place at the Finals.

Finally, the welcome return of Lockwood.

They missed last year’s event, but return under the baton of the experienced John Roberts.

They were pretty competitive on their last appearance in 2009, coming 6th, so it will be interesting to hear what form they are in after their contesting leave of absence.

Hard to see further than a win for Reg Vardy if they play to form – but it is a significant if.

On their day they are a class apart, so they won’t want to miss out on a good start to the season, although EYMS should push them close if they can show that Butlins form once more.

Fishburn and Riverside should battle it out for the final podium slot with Felling and Barton close behind. Lockwood is our dark horse.

How North of England bands did in London: