There are plenty of bands that have risen again and again to the challenge at this contest — so Resurgam should be a doddle then? 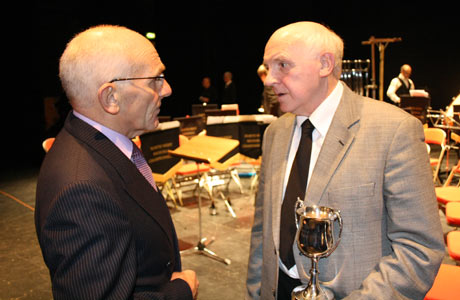 The strength in depth of North West banding is certainly seen by the overall quality of the competitors trying to get to Cheltenham in the Second Section.

And although the North West hasn’t produced a National champion since 2000, they continue to send bands that are strong contenders for the title – 5 runners up and 11 top six finishers in fact.

Whoever gets the nod from Kevin Wadsworth (right) should be confident of doing well, although they will have to work hard to impress a judge who has gained a well earned reputation for telling it as it is – good or bad.

’Resurgam’ is a heck of a test of musicianship as well as character at this level – right from the start in fact, and there may be a few prayers given to the contesting gods before a note is blown at the Pavilion Theatre on Sunday.

This seems to be a well matched field of rivals and 11 of these bands have already flexed their early season contesting muscles at either Butlins or Brass at the Guild Hall – with six giving Eric Ball’s classic work an airing in the process.

The line up is headed in alphabetical order by Besses o’ th’ Barn, who despite some lean years of late is starting to find its feet again.

Geoff Bradley takes the helm of the former three time Area champion as they look to build on a solid 10th place at Preston.

Blackpool Brass also made an early season appearance at Preston coming 12th in the top section and will be looking to improve on last year’s 12th place and a first qualification since 2007.

Meanwhile, Co-operative 2000 Brass fell of the pace last year in coming 10th and will be looking to a return to form under the talented Jamie Meredith, whilst Delph, the 2010 Third Section champion will look to build on a rather unlucky midfield finish at Butlins a few weeks back under the experienced Phil Goodwin.

Grenville Moore is another experienced ‘older’ head who has done great work at Dobcross  – including a top six finish last year after their promotion from the Third Section.

They look to build on a fine podium finish at Brass at the Guild Hall.

Gordon Higginbottom returns with Douglas Town as they look to make an impression following their promotion on the back of last year’s 9th place in the Third Section, whilst Eccleston Brass looks to gain a bit more consistency – hopefully following a fine 5th place at Brass at the Guild Hall.

Flixton fell away a little last year in coming 9th, but will look to show the form that gave them a podium finish at last year’s Northern Open, whilst Haslingden & Helmshore hit top form at Butlins when they came runner up.

They look to return to the finals for the first time since 2008 and could be one of the bookies favourites.

Haydock is starting to return to the form that not so long ago saw them in the top section.

They just missed out on a Harrogate berth last year and with a subsequent podium finish at the Northern Open, confidence should be high.

Middleton meanwhile has been a consistent contender over the past few seasons and will look to build on their Preston top six finish, whilst Morecambe produced a fine showing in coming 4th on their return to this section following promotion.

Mossley will make the trip to the Winter Gardens full to the brim with contesting confidence following their fine win at Butlins just a few weeks back.

Relegation from the First Section has revitalised Duncan Byer’s band and they could be a short priced runner for a Cheltenham qualification spot.

Old Hall Brass endured a rather unfortunate time of it last year and was not placed as a result, but they showed decent form in coming 11th at the Guild Hall.

Tyldesley meanwhile showed that their relegation from the First Section for the first time since 1999 might have done them some good as they claimed the recent Guild Hall title in fine style under Robert Taylor.

Finally, there is sure to be a strong challenge from Uppermill as the Pontins Third Section champion looks to add yet another title to their CV under Alan Widdop.

6th place at Butlins showed that they have already hit a rich vein of form.

With such a well matched field it could be anyone’s title, but the likes of Mossley, Uppermill and Haslingden & Helmshore look good each way bets for a possible qualification spot.

They should be hard pushed though by the likes of Tyldesley, Dobcross Silver and Haydock with our dark horse of Delph.