Martin Benson was an intrigued competitor as well as spectator at Butlins on the weekend... 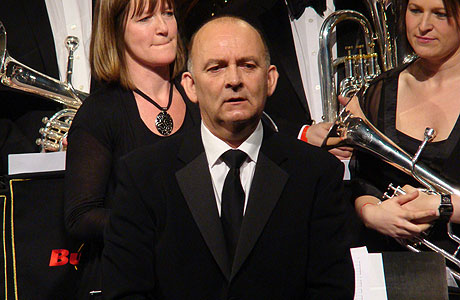 A puzzled look for Jeremy Wise and Redbridge...

Waiting outside in the cold for the lifeguards to let us back into Splashworld allows time for reflection on Butlins 2011.

The contest very nearly ended with a real bang as part of the swimming complex caught fire, forcing those of us who fancied a dip on the Sunday to throw on as many clothes as possible and leave in a hurry.

Fortunately of course, there was plenty of water to hand and the crisis wasn’t too serious.

This came at the end of a weekend of some red-hot performances and some pretty ice cold ones too, with some bands sliding well below the expected meniscus line of excellence.

One band that most certainly set the stage ablaze was Dronfield in the Fourth Section.

They took the champions banner for the second year running, equalling Thoresby Colliery Youth’s achievements in 2006/7. 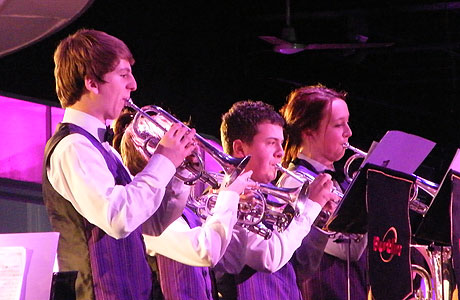 With Flowers positively blooming and Desford Colliery wilting under the pressure of defending their title, the Championship Section also provided Butlins with the fiery competition you expect from top ranked bands when there is a lot of lolly up for grabs.

The First, Second and Third Sections saw bands from the ‘North’ take home the winning trophies. City of Sheffield, Mossley and Pemberton Old DW all soared above their fellow rivals to take £2,000 each back up the M6.

Perhaps the travelling distance is putting off the Southern bands from stopping this northern cash drain, but bearing in mind Central Ohio Brass made the trip across the pond for this contest, there’s no real excuse for not coming here, especially as unlike Pontins, Butlins pays out its winnings quickly.

This year also saw the return of the Youth Section, with the appropriately named Youth Brass 2000 successfully defending their title.

As the new addition this year though, the contest organisers set up a wonderful Junior Ensemble Section, attracting two contenders from Shirland and one from Wigston and Gresley Colliery Youth.

This youth aspect to the contest is growing in popularity and success, so who knows what we could get next year. A toddler section maybe?

Despite the £7000 prize money in the top section, Butlins still failed to pull in the Yorkshire heavyweights such as Black Dyke, Brighouse or Grimethorpe onto the contest stage.

Even though two have appeared at Skegness performing concerts for their peers, (and Brighouse were excellent on Sunday night) they still can’t be persuaded by the chance of winning up to £8,000 for two days work. That’s four times as much as they would win at the Royal Albert Hall?

Finances are getting tighter in banding, so when will we see the likes of Brighouse, Fairey, Foden’s, or even Grimethorpe and Dyke here? Not long one suspects. 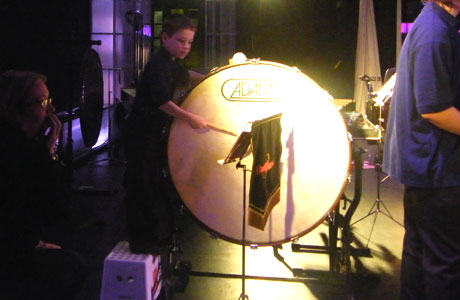 If I can just hit this a bit harder and not lose my footing!

On a the down side, only the organisers know why they continue to hold the results in the Reds bar and not also project them on one of the many screens dotted around the Skyline resort.

Crammed into the Reds with thousands of other bandsmen and women, craning your neck to see the stage and hear the announcements, is not a particularly enjoyable experience without a great deal of alcohol and a good result to help you on your way.

On the Sunday, the Championship Section results worked better but by them most people had heard enough brass band entertainment, despite some fine efforts from the competing bands – the innovative highlight for me, the creation of a percussion instrument/ trombone ‘drumbone’ by Redbridge which showed the kind of imagination needed to really entertain the Butlins crowd.

However, the judges preferred the musical leadership of Alan Morrison and EYMS and gave them the nod for the most entertaining band, although I don’t recall anything as entertaining as Redbridge on the day - but that’s just me.

So, in the contest’s 8th year, there is still room for improvement.

However, the quality of playing is only getting better and better and the prize money will always attract bands. It would be nice though if that included some of the very biggest names in the business.