The members of Bad Ass Brass tell 4BR who they would want to invite around their very large dinner table... 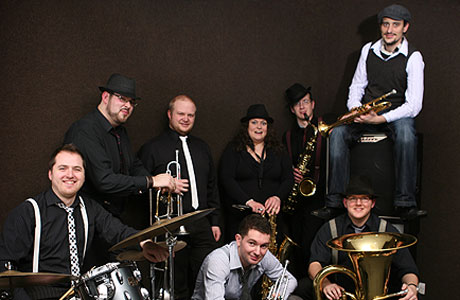 This time it's the talented members of Bad Ass Brass Band (above) who drew up their list prior to their appearance at the Butlins Mineworkers Festival in Skegness.

As with any band with lots of opinions - this one took some sorting out, as they told 4BR...

"After 20 minutes locked in a room trying to sort out our ultimate guest list, we soon realised that we had so many suggestions, we had to establish some selection ground rules:

Each section of the band had one pick (Trumpet, Trombone, Saxophone, Sousaphone and Drums)

We would shoehorn in the ensemble who had had the most influence on Bad Ass Brass."

A compromise then? "The final four places would be selected by majority vote from a shortlist.

We also decided on the venue for the dinner and seeing as we have a time machine available to us we thought it would be silly not to use it. So we are going to ask everyone to meet at the Captain's Table on the RMS Titanic at 7.30pm on 11th April 1912.

That should give us enough time to eat, drink and talk through the night, and still give us two days to work out how to get off."

It is an inexplicable fact of life that all brass players from all musical styles get excited by high trumpet playing.

We had the pleasure of hearing Maynard and his band play live a few times over the years before he sadly passed away and it was fantastic to see a man who loved what he did and existed to use music as pure entertainment - something that we try to replicate as a band.

He would be worth an invite if only to hear him say “Let's take one more trip to Birdland” just once more.

Wycliffe Gordon is one of the most progressive and sought after jazz trombonists working today and the opportunity to sit down over dinner and have a good old natter about his thoughts and views on the world of music would be fascinating.

He is also having an amazing impact of music education, which is something that is hugely important to Bad Ass Brass.

Selecting one saxophonist from many who have had such an influence over the years is an almost impossible task.

The thing that swung it in Lee's favour is that of all the people we could have gone for, he is renowned for being a real chatterbox and full of great stories about his time spent working with Miles Davis during the ‘Birth of the Cool’ Sessions.

Who wouldn't want to hear those?

Bad Ass Brass's sousaphone player, Mike Poyser explains why… I believe Owen to be a phenomenon on tuba – probably the best ever! He makes a sound that nobody can quite get to, just listen to the Batman: The Dark Knight sound track or countless others (eg. Bond, Gladiator, Harry Potter, Shrek) to hear what I mean.

Some people would want him at their dinner party to pick his brains about his immense range, superlative sound, monstrous lung capacity and freakish technique.

For me however he’s a great friend who lives round the corner so he’d be easy to pick up, and I know we’d enjoy a pint or two with these other great guests!

So far we have selected our guests for their great personalities as well as their incredible musicianship.

Buddy Rich breaks the rule as we thought it might shake the party up a bit to have a man that was renowned for being a big bully and spared no time in sacking members of his band if they even put the slightest foot out of line!

He was a pretty good drummer too though.

As the overall selection process for this dinner is from a group perspective, we thought that we'd try and get away with inviting a group as just one of our selections (if you're reading this then we did!).

Young Blood is an incredible band from the United States and is the band that inspired Bad Ass Brass to form in the first place.

Our other dinner guests would surely think we were cool if these boys turned up.

We think Shostakovich is one of the greatest composers ever and someone that really harnessed brass instrumental playing to the maximum – so many of his symphonies are testament to this.

The one piece that fascinates us most is his 7th Symphony “The Leningrad” written while under siege during the 2nd World War.

“How do you write an epic symphony while being bombed?” would be question number one.

He was also into football, which would be a good icebreaker!

As Alan Partridge is the most quoted man in Bad Ass Brass rehearsals (mainly thanks to Sam our Sax player) we thought it would be a nice idea to have the man himself there to lighten the mood.

He might even give us one of Alan's facts of the day:  “crabsticks do not actually contain any crab and since 1993 manufacturers have been legally obliged to label them ‘crab-flavoured sticks’.”

Quite simply - a genius!

He revolutionised physics with his theories of Special Relativity and General Relativity. He wrote hundreds of papers on all aspects of physics (many of which were ground breaking), he won a Nobel prize, helped win WWII for the allies by encouraging nuclear arms development (Germany, he pointed out to Roosevelt, had already started their programme) and was even invited to be President of Israel!!!

This gives us quite a lot to discuss over our starters.

We also reckon that he would come into his own when we attempted a crossword while sipping port after our feast…..

a) Someone who can cook
b) A pretty face.