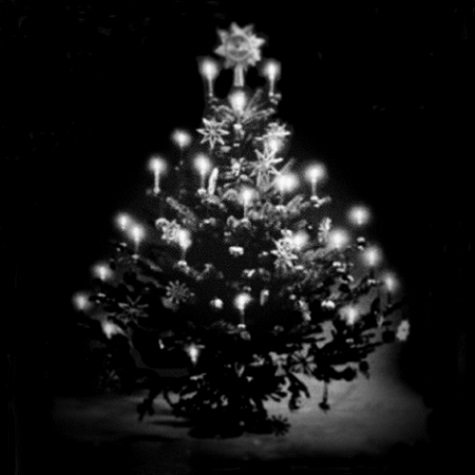 Not for the first time the Tokyo based duo of baritone saxophonist Rie Takeuchi and tuba player Gideon Juckes explore the sense of haunting bleakness that can pierce the heart as well as the mind during times of isolation.

On this occasion they provide a potent antidote to the crass musical commercialism that now surrounds Christmas - exploring the deep-set roots of ritual and response that once accompanied the religious as well as secular festive period.

It makes for an absorbing listening experience - from 13th century monastic France to 20th century Finland, rural Hertfordshire to the Basque country, India to Romania.

A poetic sense of time and place accompanies the lyrical source of each track (although the lack of physical sleeve notes is a frustration), as well as an eerie, unsettling atmosphere (beautifully mixed) that sets a wintry chill deep into the marrow of your bones.

A poetic sense of time and place accompanies the lyrical source of each track, as well as an eerie, unsettling atmosphere (beautifully mixed) that sets a wintry chill deep into the marrow of your bones.

Crunching footsteps in crisp new snow herald the opening ‘Balulalow’  with its sense of troubling uncertainty. ‘Gabriel’s Message’  is imbued with fearfulness too, despite it rolling flow, whilst the troubling visions of William Blake neatly corrode the innocence of Taverner’s carol, ‘The Lamb’.

A distant caw of a menacing crow sets the scene to the title track based on a old Herefordshire folk-song of a vengeful Jesus, although hope springs eternal in the touching Catalan carol ‘El Desembre Congleat’  and the sweet Romanian carol,  ‘Leganelul Lui Iisus’  (Jesu’s Little Cradle’).

The delightfully ‘Shyam Teri Bansi Pukare’  – a modern Hindu song of celebration to the God Krishna, weaves a colourful path to a strange land where ‘The Full Moon’  rises above a babbling crowd of festive holiday makers.

Elsewhere the Romanian ‘Santa Claus’  is certainly no figure of Coca-Cola excess consumption; more a reflection of the toil endured to receive small gifts of love and affection, whilst even the joyfulness of ‘Jouluna’  also has a weary Finnish acceptance of melancholic fate.

‘Veni, Veni Emmanuel’  retains its monastic bleakness (‘From the dread caverns of the grave; From nether hell, thy people save’) before ‘Christmas Past’ closes a wonderfully atmospheric and thoughtfully inventive recording with just the right tincture strength of mystery.