CD review: Aspects of Don Lusher — Tribute to a Legend 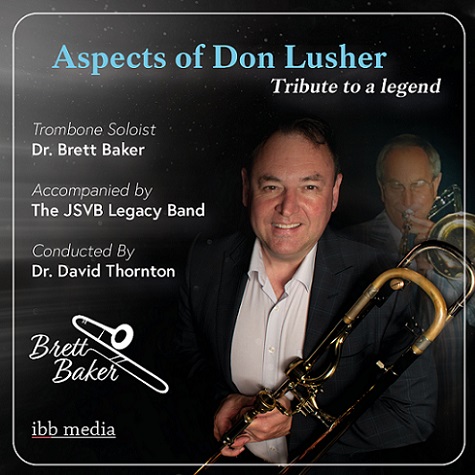 For over 60 years Don Lusher was the epitome of the British session musician whose craftsmanship maintained a link to the last of the post war era of big band performers in the UK and USA.

Supremely professional and versatile he honed his talent with the likes of Joe Daniels, The Squadronaires, Jack Parnell and Geraldo, before sealing his reputation with a nine year stint as lead trombone with the Ted Heath Big Band.

The ultimate endorsement came when the Americans, including Frank Sinatra and Nelson Riddle sought his skills for their tours.

He fronted his own Big Band until his death in 2006. By then his legacy consisted of a treasure trove of recordings, performances and accolades – his sound as recognisable to listeners as that of his great associates Acker Bilk, Kenny Ball, Johnny Dankworth and George Melly whom he performed with so many times.

His link to the brass banding world was marked by both a family connection to the Salvation Army and memorable premieres of works such as Gordon Langford’s ‘Rhapsody for Trombone’  as well as his own ‘Concert Variations’  amongst others.

Although the performances from Dr Brett Baker and the JSVB Legacy Band are notable in their stylish homage, the 21 tracks completely lack context or explanation.

With such a fertile hinterland to explore in tribute, it’s a great pity then that this CD is such a missed opportunity. Although the performances from Dr Brett Baker and the JSVB Legacy Band are notable in their stylish homage, the 21 tracks completely lack context or explanation.

Without time or place

It is a legacy without time or place; the absence of sleeve notes on a basic fold over insert an oversight that the great man himself, so meticulous in his own preparation, would have baulked at.

So too others. Brett Baker has his own hard-earned reputation to maintain, yet despite his marathon session contribution on a host of neatly packaged transcriptions and arrangements (the arrangers get no mention), the performances hang forlornly in their isolation.

They are also frustratingly inconsistent in recording quality and balance, whilst the CD cover features a ghostly apparition of Don Lusher hovering on the soloist’s darkened shoulder.  It all seems stitched together without knowing what the final tribute outcome was really meant to be.

There are simply too many aspects of this recording that will leave even Don Lusher’s most ardent fans scratching their heads in frustration and disappointment.