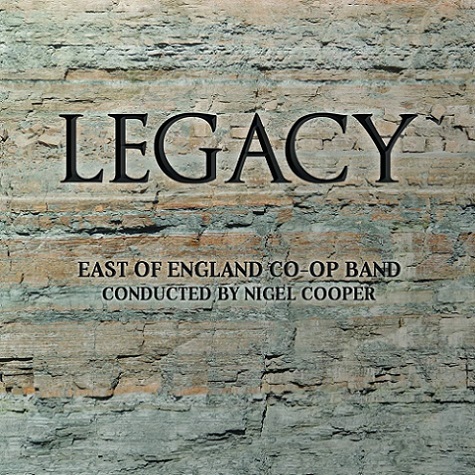 The Victorian exploitation of transportation, commerce and moral rectitude that brought brass bands to communities the length and breadth of the UK, was not a phenomenon confined to its industrial heartlands.

Rural areas also saw an explosion, that although lacking the self-maintaining competitive intensity that became established in urbanised areas, still remains to this day in a strong communal identity and pride in banding activity.

That is shown by this celebratory release from East of England Co-op Band.

Formed in 1982 through a merger of two bands in the Ipswich area of Suffolk, they have become a well-run, busy ensemble, making solid incremental progress to Championship Section level in 1996.

The ebb and flow of contesting life has seen occasional moves between the top two tiers since, but at present there is a strong upstream current under MD, Nigel Cooper after winning the London & Southern Counties First Section title in 2022 to return to the top section once more.

The 15 tracks showcase that ensemble confidence in full; a brace of bold test-piece performances (one live, one recorded) balanced by a selection of thoroughly prepared concert works, two fine soloists and a world premiere, all aimed at supporters and occasional listeners alike.

It's an eclectic range; the opening ‘Akademische Festfanfare’  balanced against ‘633 Squadron’, ‘Breezin’ Down Broadway’, ‘Prelude, 49th Parallel’,  and ‘O Magnum Mysterium’  before we get halfway through – and each delivered with precision, balance and warm tonality.

It's an eclectic range; the opening ‘Akademische Festfanfare’  balanced against ‘633 Squadron’, ‘Breezin’ Down Broadway’, ‘Prelude, 49th Parallel’,  and ‘O Magnum Mysterium’  before we get halfway through – and each delivered with precision, balance and warm tonality.

The detours into Salvation Army repertoire with ‘Under Two Flags’  and ‘The Light of the World’  contrast with the very secular joys of ‘The Hylton Legacy’  - Peter Graham’s colourful tribute to the great 1930 big band leader.

The commission of Philip Harper to write his clever evocation of the ‘Field of the Cloth of Gold’  – the ostentatious display of monarchic wealth that provided the backdrop to a meeting between Henry VIII and his French counterpart in 1520, makes for a cracking piece of fanfare emblazoned Korngoldesque technicolour pastiche.

That event was organised by a local lad made good in Thomas Wolsey – a man who would surely have appreciated the ability to impress friends and foes alike as shown by this excellent  release.