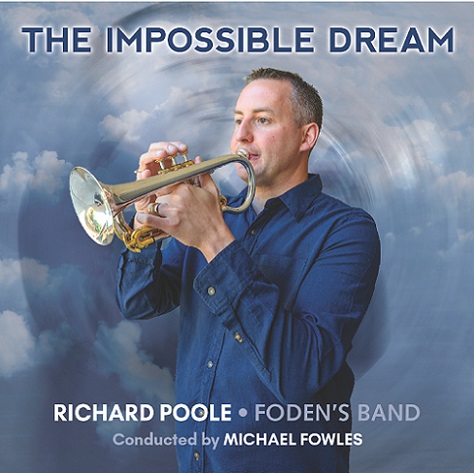 Somewhere, the great Charlie Cook, arguably the finest soprano player in Foden’s proud history will be smiling in admiration at this solo CD release.

The man who provided the ‘octave stop’ to Fred Mortimer’s all conquering 1930’s ensemble will have recognised in Richard Poole all the attributes required in the mastery of the instrument; a thinking player imbued with grace and eloquence, fearless virtuosity, and cast-iron technique.

Cook was also an established cornet player before making the soprano move - a hinterland that provides an essential bedrock of musical understanding. Being in the very top strata of top-class soprano performers is much more than simply having the ability to play high and loud.

Poole (who took to the Foden’s sop chair in 2010) can certainly do that and more - as comfortable and tuneful in the uppermost echelons as he is in the mid and lower range dynamic colour spectrum – from icy blues to atomic reds.

Crucially though his tonality has an ingrained malleability – the edge to his sound used with sparing appropriateness.  He controls his virtuosity with finesse and spatial awareness, tenderly shaping linear phrases, keeping filigree in coherent configuration.

Crucially though his tonality has an ingrained malleability – the edge to his sound used with sparing appropriateness.  He controls his virtuosity with finesse and spatial awareness, tenderly shaping linear phrases, keeping filigree in coherent configuration.

His stylistic understanding stands out; the coloratura operatic staccatos of Mozart’s ‘Queen of the Night’  aria and baroque precision of Bennett’s ‘Trumpet Voluntary’,  balanced by the languid melancholy of Gershwin’s ‘Summertime’  and the bravura of ‘The Debutante’, the flowing beauty of ‘Che Soave Zeffiretto’  and nonchalant swagger of ‘Blue’.

The power ballad stuff has just the right weight of bombast; from the title track to the cleverly realised ‘The Greatest Love of All’  and ‘Ice Castles’ – Through the Eyes of Love’.  Elsewhere the familiar standards are polished, as are the subtly realised (and recorded) features with the marimba and organ on ‘Ave Maria’,  ‘Gloria in Excelsis Deo’ and ‘Gabriel’s Oboe’.

The lack of a major work is a missed opportunity though.

The 17 tracks amount to a hugely enjoyable variety pack in need of a meaty core, and Poole is a performer with the musicianship to have carried it off with aplomb.

Losing a couple of the more familiar items would have added extra weight of substance to a super showcase release from a player who has taken the Foden’s soprano mantle from the great Charlie Cook and made it his own.

November 29 • Reading Band is a hard-working, positive and (most importantly) welcoming third section brass band who have a vacancy for a capable and committed ** SOLO HORN ** player.. . For more information about the band please visit our website.