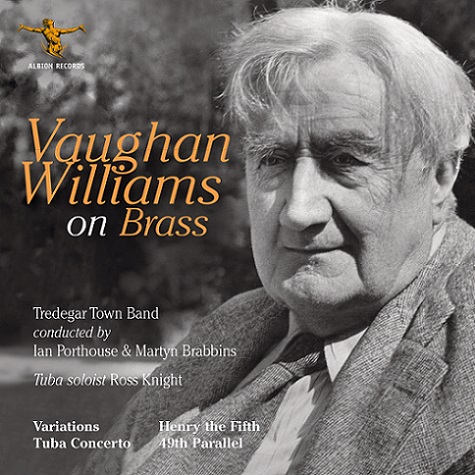 The plaudits as well as commercial success gained for this outstanding release have been richly deserved.

Everything stands in authentic quality and testament to a great composer. The 10 works (including six first recordings) are inspired by the intuitive interpretations of Martyn Brabbins and Ian Porthouse, delivered with rich tonality, subtle modal colourings and cohesive textures by an ensemble on superb form.

At its core are a brace of superbly realised performances. The first comes from Ross Knight of the iconic ‘Tuba Concerto’; the vocal sonorities of the soloist’s absorbing lyricism enhanced by his commanding, tempered virtuosity and agile clarity (played on the F tuba). It is a playing that flows with an arc of poetic romanticism.

the vocal sonorities of the soloist’s absorbing lyricism enhanced by his commanding, tempered virtuosity and agile clarity (played on the F tuba). It is a playing that flows with an arc of poetic romanticism.

So too the masterful ‘Variations for Brass Band’  - cleansed of its engraved imperfections with an expert restorer’s understanding by Philip Littlemore and interpretated with the most delicate touch of cultured affection by Martyn Brabbins.  The purity of the music making is stunning.

That hallmark is embossed on each of the works - from the stately nobility of the ‘Flourish for Band’  to the Methodist sincerity of ‘Prelude on Rhosymedre’.    ‘The Truth from Above’ is a gem of hymnal melody, sourced and counterpointed by Paul Hindmarsh with an alchemist’s touch, whilst ‘Prelude on Three Welsh Hymn Tunes’  speaks to the listener with an eloquent, reverential musical tongue.

So too the west country accent of a new edition of ‘English Folk Songs Suite’  – returned to its original pitch and as a result its authentic sense of bucolic vibrancy. The delicacy has a polish of bright substance that swaggers and sashays.

‘Sea Songs’  (initially the second part of the ‘Folk Songs Suite’) has also been returned to its original key to be delivered with a nautical brio that ebbs on a joyful tide. There is also a distinctive regal splendour to ‘Henry the Fifth’  that captures the drama, pathos and sheer majesty of the writing in glorious musical technicolor - full toned and magnificent.

There is also a distinctive regal splendour to ‘Henry the Fifth’  that captures the drama, pathos and sheer majesty of the writing in glorious musical technicolor - full toned and magnificent.

The 1941 film ‘The 49th Parallel’  may now be consigned somewhat to cinematic history, but the ‘Suite’  devised by Paul Hindmarsh and arranged by Philip Littlemore from the Vaughan Williams score is a remarkable and very prescient achievement.

The evocation of the atmospheric landscape (set in Canadian wilderness), ever present menace and fearfulness (the film was a piece of war time propaganda) is never lost– enhanced by the clever positioning of its iconic ‘Prelude’  as its uplifting climax.

Few brass band CDs of recent times have made such an impact on the wider listening public.

It is mark of its musical excellence in every respect that it has.

5. Sea Songs
6. Henry the Fifth
7. The Truth from Above
8. Prelude on Rhosymedre
9. Suite from 49th Parallel
10. Prelude on Three Welsh Hymn Tunes