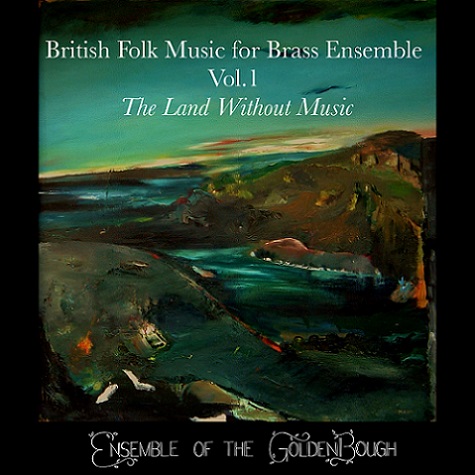 Speaking in the House of Commons following the death of Neville Chamberlain in 1940, Winston Churchill questioned the “worth” of recording history “to revive its echoes, and kindle with pale gleams the passion of former days.”

For him it was incalculable – later publishing a four-volume work that covered an arc of British antiquity from Julius Caesar’s invasion to the end of the Victorian age. What he recalled of the ethnomusicological history of the nation was left to others however – from the sounds of the legionary Cornu to the brass band cornet.

The Ensemble of the Golden Bough has taken on the task.

Named after a book by Scottish anthropologist Sir James Fazer that explored the myths that underpinned a nation’s cultural development, it is made up of a quintet of London based professional players – including for this release, Philip Cobb who is heard on the opening track.

Although not reaching back into the mists of time, this first volume (enhanced by extensive liner notes by Artistic Director Christopher Barrett) turns a ‘magnifying glass’ on a patchwork of musical influences with a pertinent field of focus.

Although not reaching back into the mists of time, this first volume (enhanced by extensive liner notes by Artistic Director Christopher Barrett) turns a 'magnifying glass’ on a patchwork of musical influences with a pertinent field of focus.

Deliberately seeking to document folk song repertoire explored by the likes of composer Percy Grainger, it is broken into two ‘chapters’.

The first consists of new arrangements by its composers in residence, Jonathan Heeley and Ryan Linham, of original folk song transcriptions made by John Foulds, Frank Bridge and Grainger himself.

It opens with Benjamin Britten’s ‘Fanfare for St Edmundsbury’,  written to celebrate the ‘Pageant of Magna Carta’ in 1959; itself a celebration of the historical importance of the legislative bedrock of British democracy.

Its heraldic brilliance is tempered by the questioning clauses of the trumpet lines – a reflection of the emerging new powers that will shape its myths, rituals and ceremonies in the ages to come.

Frank Bridge’s (who taught Britten) ‘Cherry Ripe’  is a curio delight. Written in 1916, its ‘lightness’ cannot hide its emotive sense of tribute to friends (fleetingly touched on) cut down in the bloom of youth to the carnage of the First World War.

It is followed by ‘Molly on the Shore’  and ‘Ye Banks and Braes o’Bonnie Doon’,  familiar but freshened, and the delicate, joyful, ‘English Tune with Burden’.

Frank Bridge’s (who taught Britten) ‘Cherry Ripe’  is a curio delight. Written in 1916, its ‘lightness’ cannot hide its emotive tribute to friends (fleetingly touched on) cut down in the bloom of youth by the carnage of the First World War.

The second half documents through compositions by Linhan and Heeley (joined by fellow composer in residence Rory Simmons, whilst Christopher Barrett also recorded all the performances on the release with the minimal of digital mixing – the Britten is a single take), folk songs originally captured by Grainger onto wax cylinders in the period 1906 – 1908.

An outstanding release closes with ‘Ballad’,  an enveloping, miasmic lament to a land and culture soon to be engulfed by soulless industrialisation.