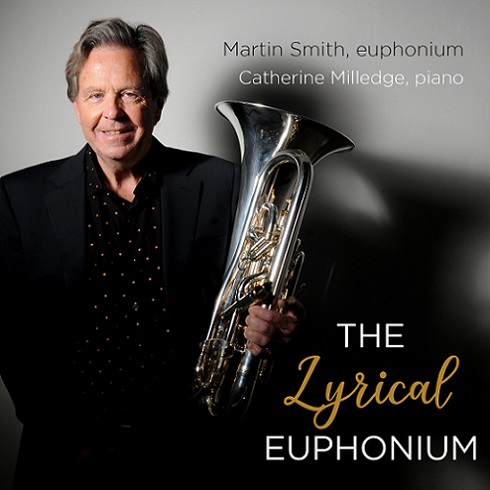 The joy of life-long learning and music making underpin this engaging release from a player who returned to higher education and brass banding after a prolonged hiatus.

After 35 years in which he enjoyed pursuing sporting interests, Martin Smith took up the euphonium once more – becoming a Fellow of Trinity College London (FTCL) as well as completing his Masters Degree in Performance at the Royal Welsh College of Music & Drama.

As the performances of the 16 tracks accompanied with splendid musicality by pianist Catherine Milledge show, accomplishment through a balance of determination and ambition are also found in the tailored realism of his musical endeavours.

The familiar recital solo items - from the musical engagement letter from Elgar to his future wife Alice Roberts in ‘Salut D’Amour’ to the ‘Flower Song’ from ‘Carmen’ are played with an intelligent appreciation of style and technique.

The familiar recital solo items - from the musical engagement letter from Elgar to his future wife Alice Roberts in ‘Salut D’Amour’  to the ‘Flower Song’  from ‘Carmen’  are played with an intelligent appreciation of style and technique.

There are also four new compositions and arrangements.

The graceful lines of ‘Red Kite’  by Rob Wiffin captures the beauty of the bird of prey that has been successfully re-introduced to the hills of mid-Wales (also after a long 35 year plus break), whilst Rodney Newton’s ‘Sarabande’  with its hints of Handel is dedicated to Morfydd Childs, the mother of Martin’s tutor Dr Robert Childs.

Rom Stanko’s fluid take on ‘Deep River’,  made famous by the great Paul Robeson is touchingly evocative and offers contrast to Capuzzi’s ‘Allegro Moderato & Andante Cantabile’  - an elegant piece of Venetian baroque arranged by David Childs and Martin Smith to complete a concerto from a composer referred to as the ‘Orpheus of his Age’ but now long forgotten.