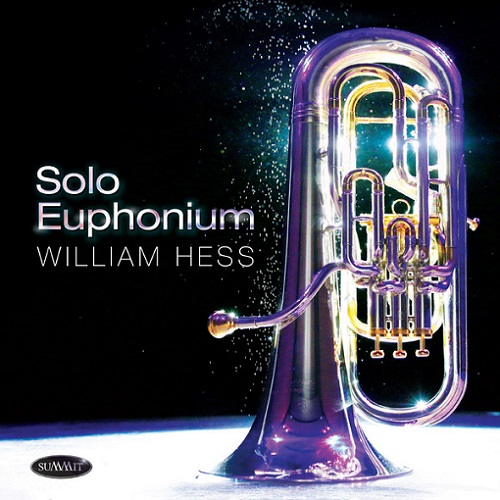 The musical language of the American euphonium playing tradition shares a common grammatical root with its ‘British’ heritage. However, the interpretation of the vocabulary of repertoire is informed by subtle differences.

The familiar ‘bel canto’ style which underpins much of modern brass band euphonium playing; bravura expressionism allied to acrobatic virtuosity, has yet to become the dominant solo characteristic of USA teaching and performance.

Away from the ensemble accompaniment that can often submerge its voice under a cloying wash of related brass band timbres, the instrument’s inherent tonal flexibility can be revealed in full.

And in this fine unaccompanied release from William Hess, it makes for fascinating recital listening.

Instructor of Euphonium and Tuba at Loyola University in New Orleans, he has gained an international reputation as a professor, teacher and prize-winning soloist, having played with Fountain City Brass as well as numerous ensembles.  He is also an accomplished trombonist and performs regularly with professional orchestras.

It is euphonium playing in elemental form: Hess displaying a command of lyricism and virtuosity on the barest of canvases; a concentrated point of focus backed by a clear rigour of stylistic appreciation.

It is euphonium playing in elemental form: Hess displaying a command of lyricism and virtuosity on the barest of canvases; a concentrated point of focus backed by a clear rigour of stylistic appreciation.

Michael Forbes’ ‘Polar Vortex’  with its chilly intensities and extremities also offers a cleverly linked contrast to the warmer familiarities of Vizzutti’s ‘Cascades’  and Paganini’s ‘Caprice No. 24’.

Although Debussy’s ‘Syrinx’  lacks a sinuous mystical quality (despite the clever acoustic idea) on the tonality of the euphonium, ‘Elegy for Mippy II’  certainly does, whilst the soloist’s take on ‘Fnugg’  is a mini tour-de-force of personality.