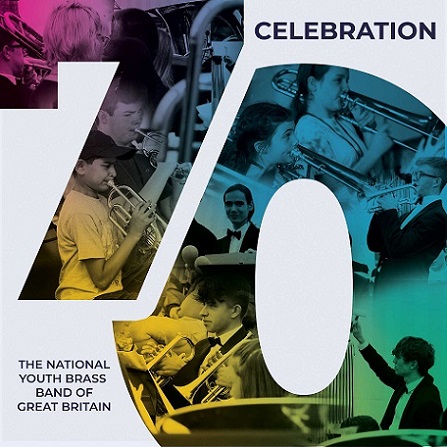 A celebration must look forward as well as back. The 70-year history of the National Youth Brass Band of Great Britain is testament to that. It is an organisation that has not rested on its laurels.

The last few years have been perhaps the most challenging since its formation. However, the response by an organisation revitalised under new administrative and musical guidance to the pernicious effects of Covid-19 has been driven by a bold sense of inventiveness.

It's encapsulated in this neatly produced CD - a celebration of future intent as much as it is an acknowledgement of past achievements.

The music chosen by Director of Artistic Planning, Dr Robert Childs, has relevance to both; from the splendid ‘Fanfare’ composed by the founding father Dr Denis Wright to the exciting, Nordic colourings of Frederick Schjelderup.

The thoughtful selection of repertoire also reflects a pastoral outlook as important to the development of the next generation of talent as that of the appreciation of a wide spectrum of musical influence (highlighted by CEO Mark Bromley in his foreword).

William Grant Still’s, ‘In Memoriam – The Colored Soldiers Who Died for Democracy’, originally commissioned by The League of Composers during the Second World War and arranged with respect by Dr Childs, highlights the carefully calibrated balance that informs the organisation’s holistic ambition.

The ongoing commitment to explore new repertoire is also shown with Lucy Pankhurst’s ‘Where She Sings Freely’; an evocative soundscape for Clara Price’s melancholic, but ultimately hopeful poetic portrait of the struggles faced by a miner’s wife who dreams to take flight of her own personal ambitions.

So to, ‘By Water and the Word’, which acknowledges the indefatigable contribution of the late Philip Biggs, although you can’t beat a touch of ‘old school’ fun with ’76 Trombones’ – the obligatory encore of the National Children’s Band which has added so much to the organisation since it was founded in 2004, or the whimsical delicacy of ‘Irish Tune from County Derry’.

Peter Graham’s ‘Strange New Worlds’ is music very much of current times (originally performed ‘virtually’ by the Children’s Band because of Covid-19), as is ‘New Beginnings’, ‘Andromeda’ and ‘Prismatic Light’ – written by composers attuned to the youthful musical outlooks of eager, explorative minds.

The National Youth Brass Band of Great Britain may well be 70 years of age, but boosted by a vibrant younger sibling and an outlook reinvigorated in scope and ambition it is an organisation that continues to be infused by the youthful lifeblood that runs through its musical veins.