CD review: The Edge of Forever 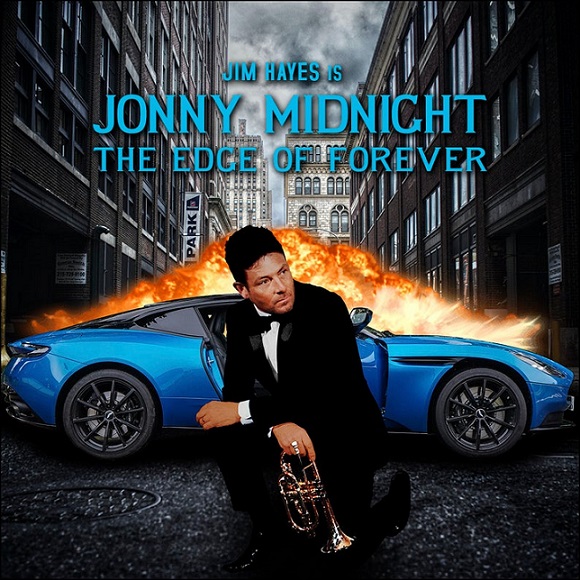 ‘The Edge of Forever’  is the ‘Thunderball’ musical offering from Jim Hayes under his espionage alter ego Jonny Midnight.

Much like the fourth Bond film, it would have made a splendid first outing (legal disputes saw ‘Dr No’ take the first bow) – a slickly produced playlist of the serious, sly and the sanguine intoxicatingly mixed like a dry martini to shake as well as stir the emotions.

The clever marketing aside, it is a showcase for a fine performer to display his focused talents - ably accompanied by Michael Fowles and an energised cooperation band.

Hayes has no need to disguise himself to deliver a suave a line of musical script; his security of technique and ability to shape-shift his tonality and style to fit the surroundings readily identify his quality: There is an inherent confidence about his playing that draws the listener in.

Hayes has no need to disguise himself to deliver a suave a line of musical script; his security of technique and ability to shape-shift his tonality and style to fit the surroundings readily identify his quality: There is an inherent confidence about his playing that draws the listener in.

He has the pipes to belt out the ‘Basseyesque’ lung busters with a bold swagger - from  ‘You Know My Name’  and  ‘The Impossible Dream’  to the title track, whilst the segues into  ‘Unforgettable’,  ‘Summertime’  and especially  ‘Stars Are Not Too Far’  by Liz Lane offer a welcome shift of emphasis to what could have been an overload of repetitiveness.

Some pieces work better than others within the limited cinematic colour palette available to the arrangers, but Andy Scott’s classy  ‘Fujiko’  and inventive  ‘Wild Ride!’  leave a lasting impression, as does Adam Taylor’s clever reworking of  ‘California Dreamin’ – which is like finding that ‘M’ is Cass Elliott rather than Dame Judy Dench.

Add a pinch of Mendez and even a barrel shot of ‘Lock, Stock’ Guy Ritchie and you get 15 polished tracks that cut a tuxedo-sharp figure of listening pleasure.

It also leaves a classy performer with scope for another outing or two – although fingers-crossed he doesn’t take to the Roger Moore beige safari suit for any further additions to an enjoyable franchise series.