CD review: In the Red — A Musical 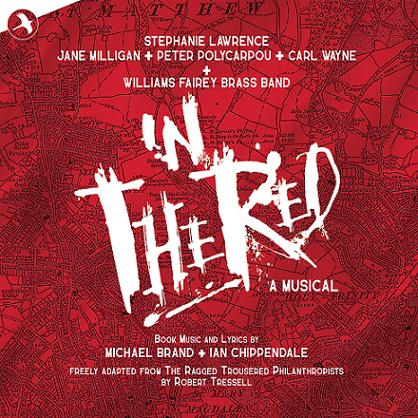 Robert Tressell’s  ‘The Ragged Trousered Philanthropists’  is one of the great political novels of the 20th century.

It remains an epically scaled, emblematic argument for the case for socialism - as relevant today as it was when written in 1914.  George Orwell described it as “a book that everyone should read”.

Over a million copies have since been sold around the world.

It was published three years after the death of author Robert Noonan and tells the semi-autobiographical tale of Frank Owen, who tries in vain to illustrate to his fellow house painters and decorators of their systemic exploitation their endure by their employers.

Informed and passionate, it embraces the allegory of Plato to the theories of Marx and surplus value - encapsulated in the famous chapter entitled ‘The Great Money Trick’.

Interestingly it is pre-dated by the first performance of Percy Fletcher’s  ‘Labour & Love’, regarded as the first original ‘test-piece’, by less than six months.

Eaton’s visionary desire for a better world may be crushed by deceit and exploitation, but for him it is a temporary set-back on his journey to the New Jerusalem.

However, Fletcher’s musical interpretation of being “a downtrodden slave” at a time when there was a groundswell popularity of socialist ideals, was to celebrate his protagonist’s decision to, “throw himself with energy and determination into his task, resolved to improve his position by continued devotion to his employer’s interests.”

Not exactly workers of the world unite then...

‘In the Red’  is a freely adapted musical production inspired by Tressell’s book.

Written by Michael Brand and Ian Chippendale and first performed in 1998 featuring a soundtrack by Williams Fairey Band under Geoffrey Brand (Michael’s father), it tells the tale of Easton, a traveller of the left who steadfastly refuses to abandon his principles faced by ignorance, apathy, hypocrisy and adultery.

Featuring a cast that included the likes of Stephanie Lawrence, Carl Wayne, Peter Polycarpou and Jane Milligan and recorded at the BBC Studios in Manchester, it bubbles with fervour, sharp wit and hard-edged pathos; the score warmly toned in portraying both bleak melancholy and Panglossian optimism.

Eaton’s visionary desire for a better world may be crushed by deceit and exploitation, but for him it is a temporary set-back on his journey to the New Jerusalem.

Hopefully, ‘In the Red’  will return to the stage in the future. In the meantime, this re-release is a pertinent reminder of just how important it is to get it there.