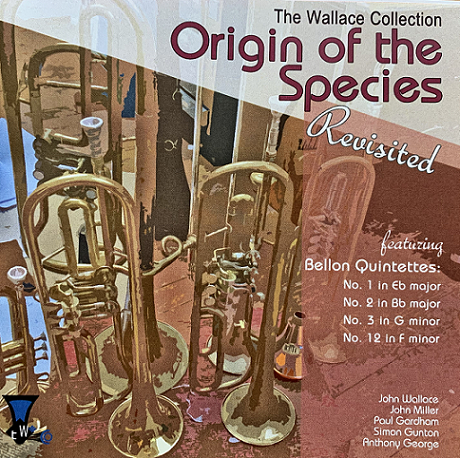 This welcome release (the original album was recorded in 1999) is a timely reminder of the beauty and craftsmanship of mid 19th-century brass quintet chamber music.

Composer Jean-Francois Bellon (1795-1869) wrote twelve brass quintets between 1848 and 1850 – a time when the musical as well as technical potential of the first chromatic brass instruments was starting to flourish and finding an outlet with virtuoso performers, especially in the heart of Paris.

And as today, showmanship was a key attraction to a public keen to be entertained in the popular ‘Concerts Musards’ of Parisian life.

It was said that entrepreneurs such as African-American keyed bugle player Francis Johnson combined novelty and sensation to equal effect: If a performer fired a pistol, the next day a rival employed a canon.

Bellon’s quintets are gems of formal, inventive style – utilising tonality and texture as much as sheer virtuosity in their structure and compass; basic sonata in form but adventurous in every other aspect.  There is bombast and bluff, balletic energy and bubbling dashes of impetuosity – all very Gallic and acrobatic but also touching and sincere.

You can image the players sending the impressionable young ladies of Parisian society into hot flushes of excitable musical hysteria with the odd musical wink of a well placed trill or the lachrymose tenderness of a tellingly turned phrase.

He treats the keyed bugle, ophicleide, slide trombone, cornet and valve/hand stopped horn as if writing for strings to provide a warmly hued palette and surprising facile flexibility.

As with John Wallace, John Miller, Paul Gardham, Simon Gunton and Anthony George on this release, the likes of Jean-Jacques Edmond Dubois, Louis-Alfred Boulcourt, Donatien Urbin, Edouard Dantonnet and Charles-Philippe Alfred Lahou must have been players of remarkable skill and intuitiveness – each of the compositions demanding nuance, elegance and vivacity both individually as well as collectively.

It's delightful stuff – understandably a little wonky in intonation in places given the instruments themselves, but so what.

You can image the players sending the impressionable young ladies of Parisian society into hot flushes of excitable musical hysteria with the odd musical wink of a well placed trill or the lachrymose tenderness of a tellingly turned phrase.

Even in these austere times it puts a rare smile of satisfaction on the face.