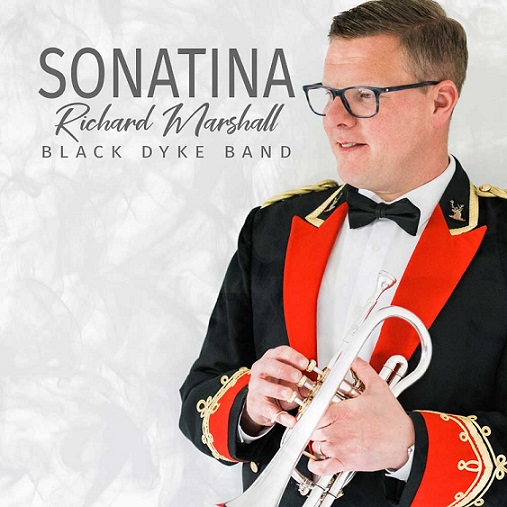 2020 marked the 15th anniversary of Richard Marshall becoming principal cornet of Black Dyke Band – the most prestigious, as well as pressurised player appointment in the banding world.

Expectation is the eternal by-product of the legendary excellence that has accompanied the role; from the likes of Alexander Owen and Ceres Jackson through to Maurice Murphy, James Shepherd, Phillip McCann and Roger Webster.

It is not enough to simply be a great player – that is a given: Like the most illustrious of predecessors, you must also leave a musical legacy.

Richard Marshall has already done that; as this collective recording of four major concerto works (two written for him) amply shows.

Three (Howarth, Ellerby and Gregson) are taken from previous recordings, with the fourth, Denis Wright’s 1941 genre standard bearer, originally written for Harry Mortimer, given a rare (but not premiere) recording outing.

It remains classically proportioned Englishness to its core; tempered, cultured, exemplary - the soloist’s telling interpretation (the second time he has recorded it) seeping persuasively as such into each of it elements.

Crafted with tasteful elegance and erudite phrasing, Marshall anchors his appreciation to its time and place in the developmental language of the instrument as a solo voice.

It remains classically proportioned Englishness to its core; tempered, cultured, exemplary - the soloist’s telling interpretation (the second time he has recorded it) seeping persuasively as such into each of it elements.

Martin Ellerby’s 2012 composition completed his brass band concerto ‘set’, and has a much more American feel of daring optimism in its sonata DNA form (the premiere was given by Jens Lindemann) - although the triptych retains the essential British character of the instrument.

The recording from 2015 (‘Genesis’ DOY352 release) has a central ‘Arietta’  of textured tonality, shaped tenderly by the soloist. It provides an expressive hub bookended by a sprightly ‘Brillante’  opening and fleet-footed ‘Rondino’.

Howarth pares the accompaniment back to its fragmentary essentials to allow the solo voice the space to showcase the full panoply of his extensive skill set – played with nonchalant virtuosity on a recording (conductor by the composer) from 2015 (‘Journey of the Lone Wolf’ DOY348 release).

The concerto anthology is crowned by Edward Gregson’s work - premiered by the dedicatee in a thrilling live performance at the 2016 European Championships and subsequently recorded in 2017 (‘Gregson Vol VI’ - DOY369) in definitive fashion.

It is also an evocative amalgam of style and sound - especially in the central ‘Intermezzo’  that drifts effortlessly on a miasmic stream of nostalgia before heading into the immediate present with a succinct ‘Rondo’  bristling with energetic vivacity.