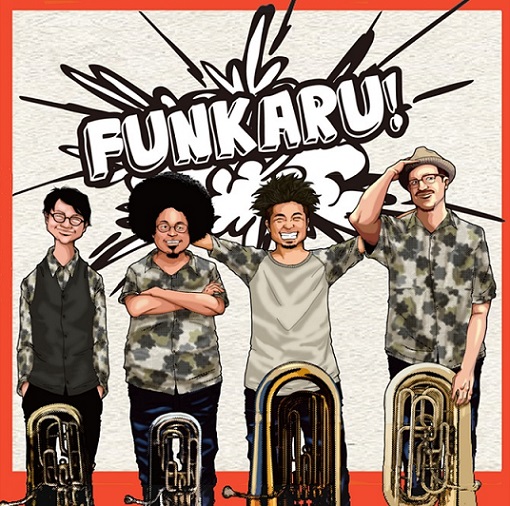 One of the great mysteries of cinematic history is how American actor Dick Van Dyke came up with his ‘cockney’ accents (it meandered from Bow Bells to Bel Air) for the role of Bert the lovable chimneysweep in Mary Poppins.

‘Gawd ‘elp us Guv’ then if he was ever asked to come up with the Japanese lyrics of ‘Supercalifragilisticexpialidocious’.

It really would have been quite atrocious.

Thankfully there is no vocal accompaniment to the witty arrangement of the iconic Disney song (or others) on this uplifting debut release from the low brass quartet of Hidenori Arai, Kyohei Ando, Taishi Furumoto and Gideon Juckes (who hails from Kent, so the closest he came to a diet of jellied eels and dropped ‘aitches was his studies at Goldsmith’s College in London).

However, he has worked in Japan since 2007 where he has teamed up with an eclectic series of musicians over the years to successfully mix different genres and styles together (such as saxophonist Rie Takeuchi on the CD ‘Music for Isolation’).

And this CD is more than a little different; ‘The Girl from Ipanema’  sauntering slowly with a minor keyed detour on her way to the beach, Dorothy sadly reflecting on her broken rainbow dreams and Chick Corea clicking his stylish Flamenco heels on what sounds like a formica sushi bar table top in downtown Tokyo.

‘One Day Funk’  bubbles along with loose limbed energy, whilst ‘What a Happy Euph Tuba Day!!’  is a cross between an American circus march and backing music to a speeded up Benny Hill sketch.  All are played with a confident, collective élan.

‘One Day Funk’  bubbles along with loose limbed energy, whilst ‘What a Happy Euph Tuba Day’  is a cross between an American circus march and backing music to a speeded up Benny Hill sketch.  All are played with a confident, collective élan.

A more serious note is struck with Shawn Kelley’s ‘Urban Suite’  from 2009. Used as a competition piece at the ITEA Quartet competition in 2010 it offers a compact quartet of different portraits of busy city life – although at its core is a softly swaying musical love letter.

It’s a lovely work, played with just the right appreciation of its musical architecture.

Classy evocative substance is also displayed with Enrique Crespo’s ‘3 Milongas’  from 1996 (which can also be performed as a trombone quartet) which neatly captures the essence of the happy side of Buenos Aires and Montevideo tango dance clubs to a tee – in turn, sinuous, sultry and optimistic.

Even Dick Van Dyke would have enjoyed dancing with his ol’ bamboo to that.