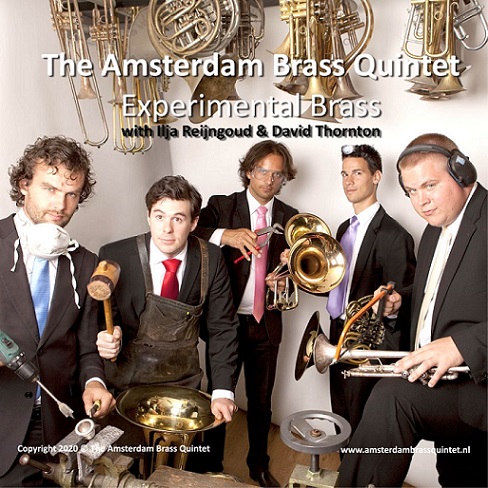 Every now and again a recording jumps out to put a wry smile of satisfaction on the face. ‘Experimental Brass’ is the one such CD.

The Amsterdam Brass Quintet was formed in 2004 by a group of players with a slightly different performance ethos (they have played on an old Cold War Soviet submarine for instance).

They have since successfully explored diverse genres and styles to widespread critical acclaim; mastering traditional and heritage repertoire alongside stage and theatre production, candyfloss pop and even Curaçaosche Danzas.

‘Experimental Brass’ extends their outlook with its sophisticated repertoire mix; delivered with an equally sophisticated sense of style, generosity of purpose and occasional glint of mischief (although having to use a ‘scan me’ QR-code to peer at text on your mobile phone instead of browsing a sleeve insert is a technophobic distraction).

The 11 tracks also offer a welcome showcase for serious compositional talent; Lucy Pankhurst, Simon Dobson, Peter Meechan, Misha Sporck, Christer Danielsson and Leonard Evers, as well as a brace of soloists in David Thornton and Ilja Reijngoud (who performs his own work, ‘Flow’) on the very top of their game.

‘Morning Coffee’  has a cool, percolated vibe with a hint of Seal’s ‘Sign Your Name’ meets ‘The Girl from Ipanema’ mixed in with a little ‘something’ sprinkled on trombonist Ilja Reijngoud’s chocolate brownies to nibble on.

‘Morning Coffee’ has a cool, percolated vibe with a hint of Seal’s ‘Sign Your Name’ meets ‘The Girl from Ipanema’ mixed in with a little ‘something’ sprinkled on trombonist Ilja Reijngoud’s chocolate brownies to nibble on.

Peter Meechan’s beautifully realised ‘Elegie’, adapted from a short work for saxophone, has a rich, melancholic feel and focus, played with chilling detachment by David Thornton, whilst ‘Storm’, with its deceptively languid opening, becomes a ferocious maelstrom for Reijngoud to fly into the face of.

Misha Sporck’s ‘Parabolen’  with its angled facets and dislocated rhythmic structures is an ensemble piece of musical Frank Gehry architecture.

It stands in stark contrast to the smooth, 1950’s liquid jazz meanderings of ‘Flow’  and Lucy Pankhurst’s fantastical ‘Tiamat’ - inspired by a five headed dragon from the fantasy role game ‘Dungeons & Dragons’.

It’s a dice and digital delay reimagining of a mythical Perseus versus Medusa battle; malevolent, baleful and wonderfully chilling with David Thornton in the heroic title role.

It’s a dice and digital delay reimagining of a mythical Perseus versus Medusa battle; malevolent, baleful and wonderfully chilling with David Thornton in the heroic title role.

The unexpected mood swings and stylised diversions of Christer Danielsson’s ‘Konsertant Svit’  are played with remarkable agility and textural contrast by John William Banther on tuba, whilst David Thornton returns to round things off with the electronic drum and bass pulse of Simon Dobson’s wonderfully fleeting ‘In Memoriam E.S.’

That wry smile of satisfaction will take a while to be lost.