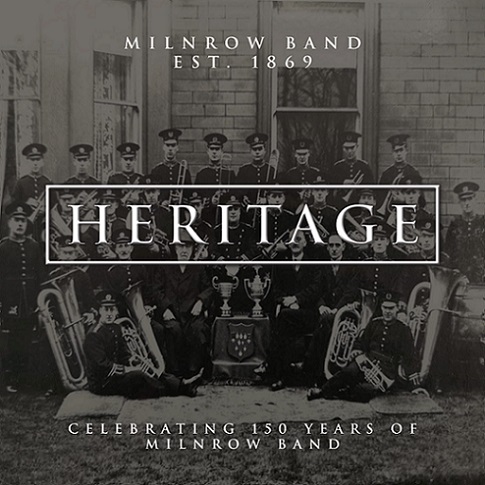 Unfortunately 2020 has turned out not to be the most opportune year to celebrate a significant brass banding landmark.

However, given that the Milnrow Band was formed in 1869 the circumstances are an understandable temporary hiatus in a long and proud historical timeline.

Theirs has been 150 years and counting of community banding achievement both on and off the contesting stage - from their earliest local concert outings through to a first golden period in the 1920s when their name appeared in the prizes at Belle Vue, and to more recent times when they became the last All England Masters Champion in 2017.

The future for a well run band with roots dug deep into the fertile musical soil around Rochdale seems rosy – even if the remaining calendar schedule of the 150th anniversary celebrations may have to be delayed a little while longer.

Hopefully they will include numerous local concerts appearances - as this CD is certainly aimed at enhancing their musical connection to their audiences; 11 eclectic tracks played with polished purpose that should easily loosen the interval-break purse strings.

Hopefully they will include numerous local concerts appearances - as this CD is certainly aimed at enhancing their musical connection to their audiences; 11 eclectic tracks played with polished purpose that should easily loosen the interval-break purse strings.

The music is easy listening fayre; from the bold swagger of the opening ‘O.R.B.’  march (written by a former MD) through to the rousing climax of Respighi’s ‘Pines of Rome’.

In between we get high quality solo contributions from Natalie Beer, with a tender ‘Share My Yoke’, and Jennifer Brown clicking together her ruby slippers for a tasteful rendition of ‘Over the Rainbow’.

There is also a neat detour from the norm with the ‘Flower Duet’  from ‘Lakme’, the quartet feature playing on ‘Deep Harmony’, and the inclusion of world champion whistler (and former MD) David Morris on ‘The Lonely Shepherd’.

Add in two well drilled versions of ‘Festive Overture’  and ‘Polovtsian Dances’, a bit of classic film scoring in ‘The Great Escape’  and an even more classic reprise of the ‘Heroic March’  from ‘Epic Symphony’  and all the boxes are ticked.

Neatly balanced by KMJ Recordings with clear and informative sleeve notes, it’s a celebration of a fine banding heritage that deserves to be bought by the bucketful when Milnrow can get back to the concert stage - hopefully before the end of their 151st year.