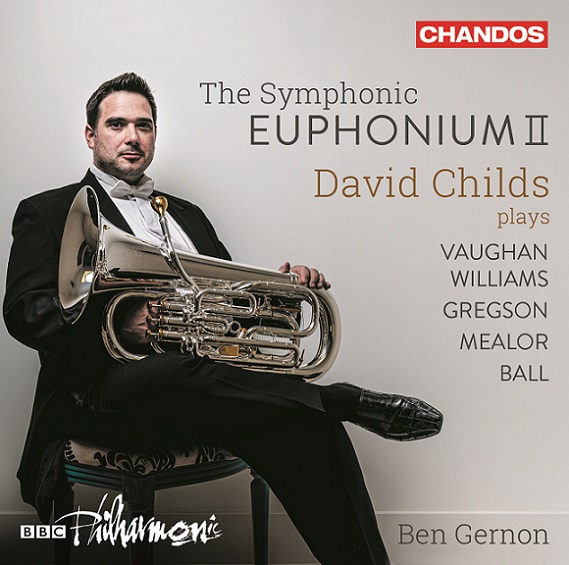 With his first ‘Symphonic’ CD release in 2014, David Childs set a benchmark for the euphonium as a true symphonic concerto instrument.  Here he takes it to a level ‘in excelsis’.

It is a consummate display of artistry; superlative in every aspect of performance.

Works from Edward Gregson, Paul Mealor and Michael Ball receive premiere recordings - as does a new orchestration of the Vaughan Williams ‘Concerto for Bass Tuba’, adapted for ‘Tenor Tuba’ (with approval by the Oxford University Press and the Vaughan Williams Charitable Trust), with perceptive expertise by Rodney Newton.

From his first note the soloist holds his genius as an obedient slave to his masterful will; each concerto as complete in flawless execution as it is in musical inspiration; his measured rhetoric as eloquent as it is transparent.

The playing is secured to the structure of the works with a discipline of poise and flexibility riveted by an iron-clad appreciation of the composer’s intentions. Ben Gernon’s instinctive leadership of the BBC Philharmonic provides the balanced counterpoint (as does the recording production) for his cynosure command.

The Vaughan Williams is reinvigorated; lighter textures and timbres revealed by the lead voice (transposed up a fourth) that play off the orchestra in thoughtful dialogue.

From his first note, the soloist holds his genius as an obedient slave to his masterful will; each concerto as complete in flawless execution as it is in musical inspiration; his measured rhetoric as eloquent as it is transparent.

In his excellent sleeve notes Paul Hindmarsh reveals that the composer was happy for the concerto to be made available to the euphonium. He would surely have been thrilled to have known that it has found its perfect muse.

The soloist’s propriety DNA is unquestionably infused throughout the Gregson 'Concerto'.

Beautifully constructed, it provides the broadest canvas for self-expression; the opening ‘Dialogues’ almost a peroration in reverse - from exclamatory forcefulness to the deftest touch of adroit argument.  The central ‘Song without Words’ yearns with melancholic, tender longing, the finale a ‘Bacchanal’ of visceral energy.

The mystical inspiration behind Paul Mealor’s elegiac ‘Concerto’ has a dark intensity of spirit, although one which is contoured with a stimulating sense of animation.

A tale of seafaring love lost but forever eternal, its singular scope embraces four distinct chapters – told in the first person by the soloist; from the depths of despair ‘forsaken by all’ through to uplifting optimism that ‘hope always remains’ that the wife will be reunited with her husband.

Michael Ball’s ‘recast’ orchestral version of his original 2002 'Concerto' frees the soloist from the homogenous tonal glue that so bedevils the instrument when cast with brass band accompaniment.

Now he floats free in the opening ‘reawakening’, becoming ever more expansive and richly expressive in the central movement, before dancing with increasingly capricious extravagance to close.

It is a flourish of masterful artistry that brings a landmark recording to an end.

To purchase: Available from 1st November