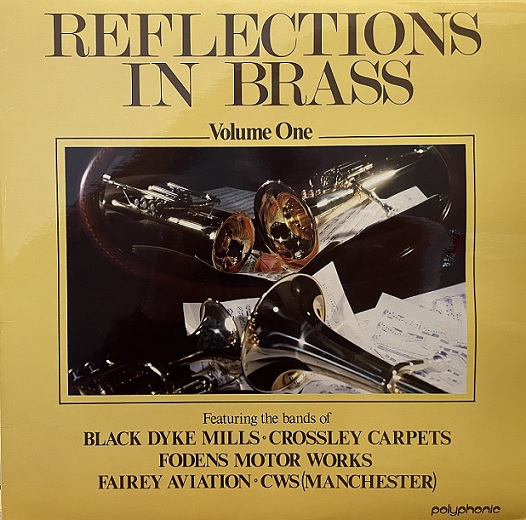 Reflecting on the perceived halcyon days of eras past is fraught with danger; especially when any misplaced romantic assumptions of excellence are laid bare by the harsh realities of technology - as this 1980 LP recording from Polyphonic shows.

At the time CDs were becoming the music industry’s recording medium of choice - soon to bring the LP and the cassette to the point of extinction. And whilst brass bands took a little longer to follow suit - Black Dyke’s famous ‘Blitz’ recording of 1985 on the Chandos label leading the way, the die was already cast.

The recordings for what was to be a three-volume series were taken from the master tapes of old 78s and LPs releases from W. Paxton & Co Ltd - a company that after the Second Word War provided well-known bands with the opportunity to record easy listening as well as more serious repertoire.

Based in one of the seedier backstreets of Soho, they were expertly attuned to providing for ‘all tastes’, although their advertising was usually found in the pages of the banding press rather than local telephone boxes.

However, competition and technology had long since been consigned them to history by the time Stan Kitchen delved into their back catalogue for this first Polyphonic LP release, followed by Volume Two in 1981 and the third in 1985 (also on cassette).

Based in one of the seedier backstreets of Soho, they were expertly attuned to providing for ‘all tastes’, although their advertising was usually found in the pages of the banding press rather than local telephone boxes.

By then, as others found, the market for nostalgia wasn’t quite the perceived money spinner they thought – especially on a medium that could not offer the same quality of sound reproduction as CDs (the original recordings, many in mono, were not ‘cleaned up’ in any way).

And whilst it could be said that they simply came out at the wrong time, they also echoed everything about a movement that was still arguably happier looking to the past rather than the future.

Add to that a cursory set of sleeve notes and at around £4.50 a pop, and it soon became clear that their appeal was limited to the most ardent collectors only.

Volume One featured Fairey Aviation under Harry Mortimer and Leonard Lamb playing the march  ‘Bramwyn’ and the 1965 National test-piece  ‘Triumphant Rhapsody’  – the later recorded with latent brio soon after their Albert Hall triumph.

Foden’s and Rex Mortimer give ‘Punchinello’ a harsh bashing, whilst Crossley Carpets’ ‘Force of Destiny’ was recorded in 1962 on a single microphone in what sounds like the warehouse of their works in Halifax.

However, the exceptional CWS (Manchester) of Alex Mortimer were somewhat diminished in stature by the inclusion of the execrable ‘Shaggy Dog’, ‘Dancing Clown’ and lamentable equine parody  ‘Over the Sticks’, which featured composer Edrich Siebert playing the whip (which he perhaps should have used in self flagellation)

Foden’s and Rex Mortimer give ‘Punchinello’ a harsh bashing, whilst Crossley Carpets’ ‘Force of Destiny’ was recorded in 1962 on a single microphone in what sounds like the warehouse of their works in Halifax.

As Stan Kitchen wrote on the sleeve notes (which, like the cover image, was the same on all three releases): “These (Paxton) records have been treasured possessions in many band enthusiast’s collections but, alas, have been unobtainable for many years.”

Perhaps there was a simple reason for that after all – and this volume of reflections showed us why.