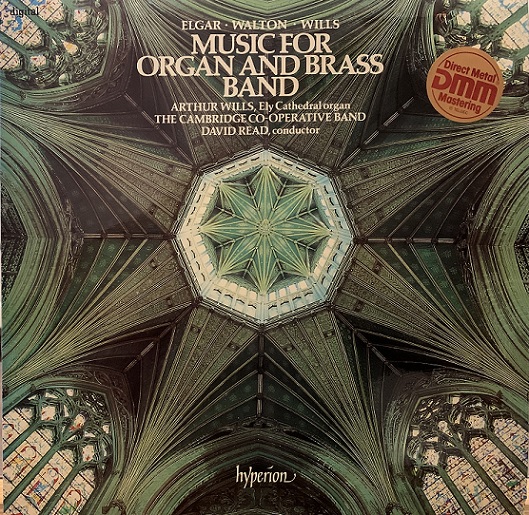 Ely Cathedral is one of the great architectural treasures of the UK.

Founded in AD 672, it has stood the test of time; from Viking raiders and Norman amendment, Tudor dissolution and Puritan iconoclasm to monarchical restoration, Victorian redevelopment and modern day worship decline.

Today it attracts over 250,000 visitors per year (Covid-19 not withstanding) – all of whom will gaze in awe at the vaulted ceiling of its Nave and Lantern Tower (shown on the LP cover).

It also resonates daily to the sound of six lay clerks who sing alongside its Cathedral Choir, backed by the magnificent organ. Its origins are certainly over 500 years old, and today, following various rebuilds and additions (especially in the Victorian era) through to the turn of the Millennium (costing over £400,000) now see it regarded as one of the finest in the world.

In June 1982 it also hosted a remarkable recording – one inspired by David Read, who at the time was the Musical Director of the top section Cambridge Co-operative Band.

He approached the Eastern Arts Association to gain funding for a major large scale work that celebrated the rich history of the area surrounding the cathedral.

The result was the Symphonic Suite: ‘The Fenlands’  – an imposing 25 minute sinfonia concertante for organ and brass band.

His vision (he thought of calling it ‘Fenlandia’) was greatly assisted by David Read, who acted as a sort of brass band amanuensis to ensure the sounds of the ensemble and organ both blended and separated as required – especially in the huge acoustic space.

It comprised four skilfully blended movements that encapsulated an evocative sense of historical character – from the warring paganism of ‘The Vikings’  and pastoral beauty of ‘Wicken Fen’,  to the dour devotion to resolute puritanism of ‘Oliver Cromwell’  and the Elgarian majesty of ‘March: City of Ely’.

The composer, Dr Arthur Wills (who passed away in October 2020 aged 94), was Director of Music at the Cathedral from 1958-1990 and a professor at the Royal Academy of Music in London.

His vision (he thought of calling it ‘Fenlandia’) was greatly assisted by David Read, who acted as a sort of brass band amanuensis to ensure the sounds of the ensemble and organ both blended and separated as required – especially in the huge acoustic space.

The result was superbly realised; aided by the outstanding recording by Hyperion Records (on direct metal mastering) and the excellent performances of the main protagonists.

Cambridge were a solid top flight band at this time, but here they played with a strict dynamic discipline and ear to balance that was as good as any elite level band of the time.

The result was superbly realised; aided by the outstanding recording by Hyperion Records (on direct metal mastering) and the excellent performances of the main protagonists.

The dramatic opening thunders with a sense of dread and destruction, followed by the palindromic ‘Wicken Fen’, eerie, gaunt and remote. The figure of Oliver Cromwell is a true ‘warts and all’ portrait – the music grimly tenacious and singular in purpose, before we reach the finale – colourful, magisterial – and unmistakably English.

It is a wonderful work that deserves reappraisal and resurrection once more.

Side 2 is equally engaging – aided once more by the subtle blending of colours and textures on familiar, intelligently developed arrangements of a brace Elgar ‘Pomp & Circumstance’  marches, a warmly shaped ‘Nimrod’  and a no nonsense ‘Crown Imperial’.

All this and there is an added bonus of the cornet solo, ‘Touch Her Soft Lips and Part’  – a gem of Walton tenderness played exquisitely by David Read.

If you haven’t got this LP in your library collection (and it available on archive recording and download from Hyperion and on CD from Helios Recordings), seek it out.

Like Ely Cathedral, it will stand the test of time.