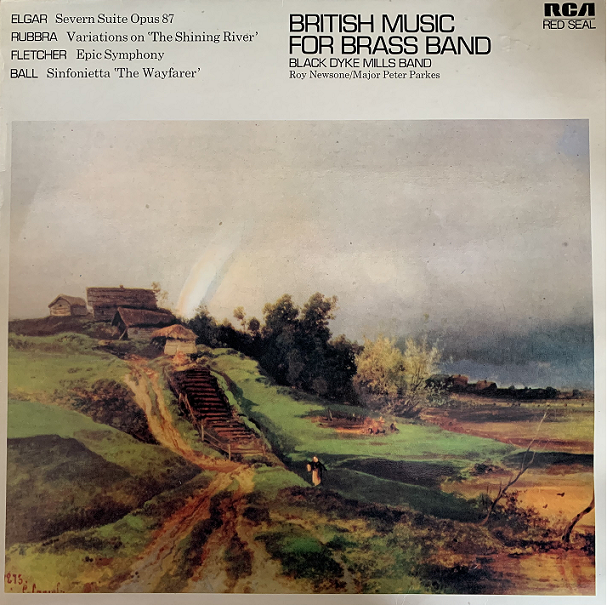 For those who yearn for a return to the traditional values of brass band musicianship there can be no finer example of its craftsmanship than this 1977 LP release from Black Dyke.

It is the Queensbury band inhabiting a plateau of excellence that has timeless persuasion.

Mature in musical thought and action, blessed with a wonderful tonal warmth and balance, they were led by conductors in Peter Parkes and Roy Newsome (his name misspelt on the sleeve) who had ingrained respect and understanding of the works of Edward Elgar, Edmund Rubbra, Percy Fletcher and Eric Ball.

The band had won the 1976 ‘Double’ on ‘Epic Symphony’  and ‘The Wayfarer’, so their inclusion on the release was no surprise, whilst they had performed ‘Severn Suite’ at the 1974 Proms. Rubbra’s ‘Shining River’  however was resurrected from the silt of neglect that had engulfed it since its use at the 1958 National Championships.

Major Parkes understandably directs the Fletcher and Ball – providing ample evidence of his wonderfully lucid appreciation of form and function; the subtle changes of pace giving ‘Epic Symphony’  a sense of both reverence and majestic joy.

The ‘Recitare’  bubbles with eager optimistic, although soon replaced by the mournful paean of loss in the ‘Elegy'; the music evoking the solemn tread of the muffled boots of soldiers bringing back fallen comrades in the aftermath of battle.

The ‘Recitare’  bubbles with eager optimistic, although soon replaced by the mournful paean of loss in the ‘Elegy'; the music evoking the solemn tread of the muffled boots of soldiers bringing back fallen comrades in the aftermath of battle.

The ‘Heroic March’  doesn’t linger in post-conflict triumphalism either (Fletcher had seen enough of the effects of war in the faces of returning troops who sought the temporary escapism of shows such as ‘Cu Chin Chow’  which he directed in London’s West End theatres.)

He also evokes a sense of elegiac beauty in ‘The Wayfarer’ – intuitively understanding what can be viewed almost as a metaphor of Ball’s own compositional arc for brass bands; from youthful ‘Adventure’  to chastening ‘Exile’  and eventual 'Homeward Journey' .

It invigorates a rather exhausted, cyclical composition.

Roy Newsome’s approach to Elgar’s ‘Severn Suite’  is respectful almost in the extreme; a cultured, understated interpretation that allows for an appreciation of the skill of the portraiture rather than a forensic examination of its layers of musical patina.

Rubbra’s Variations on ‘The Shining River’ (Op.101) though is an inquisitive delight; an underrated work of tonal delicacies and meandering flow.

Ostensibly an academic exercise in the structure of a theme and six variations, it ultimately reveals its beauty through lyrical polyphony and linear textures.

Ostensibly an academic exercise in the structure of a theme and six variations, it ultimately reveals its beauty through lyrical polyphony and linear textures.

It is derived from an earlier 1952 piano study (Op. 74) – not you suspect (for the brass band version), inspired by the poetic midnight walk by the side of a Scottish loch ascribed to it by arranger Frank Wright in the programme notes to the 1958 National Finals.

The composer makes no mention of that in his own notes on the piece on the LP sleeve.

Echoes of Holst and Vaughan Williams permeate - although Rubbra’s signature cross rhythms and rich harmonic balances (evident in much of his piano music) give it a clearly defined identity.

That is heard in the ‘Lament’ - a series of seamless free flowing duets leading to a brief swelling coda.

Why Rubbra never wrote a major work for the brass band medium again (he died in 1986 but composed until his death) is also a question for an inquisitive mind.

Perhaps his style was too ‘traditional’ as the movement emerged into the Vinter era, but on this evidence it was an opportunity lost.